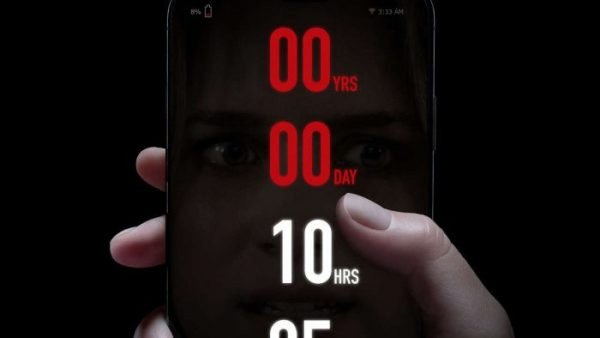 Tech-driven threats to teenage life continue to proliferate, whether it’s a faceless spectre summoned on the internet (Slender Man), a demon who’s unhappy about being unfriended on Facebook (Friend Request) or even – going old-tech now – a killer Polaroid camera (um, Polaroid). To that list of modern dangers we can now add ‘Countdown’, an app that tells you when you’re going to die, counting down to the precise second – then makes sure you die at that second. Coming soon: an iPad that eats people, a demonic GPS that prompts users to drive off a cliff, and a Netflix original series that kills you when you get to the final episode. Won’t somebody think of the children?

Countdown is PG-13 horror (albeit rated ‘18’ in Cyprus), aimed squarely at the more forgiving teen market. The deaths are bloodless, the jump scares involve scaly figures with glowing eyes, and the plot is largely incoherent. For a while it seems to be a Final Destination-type deal, where none can escape the inexorable hand of death; we must “accept the terms of our fate,” says Quinn (Elizabeth Lail), the hospital nurse who downloads the app and discovers she has only a few days to live – but writer-director Justin Dec can’t handle the ramifications of such a depressing premise, so he changes it halfway through to a curse that can, in fact, be broken. But then, if it’s a curse, why do some people (like Quinn) get an imminent death sentence while others are assured they’ll live to a ripe old age? All a bit muddled.

Actually the whole thing is muddled – though I have to say (perhaps it’s just me) that I’d rather watch a scrappy, all-over-the-place, unexpectedly interesting B-movie like this than, I dunno, Aquaman 2. Take, for instance, the #MeToo aspect. Hollywood will presumably get around to making films about sexual harassment soon; they’ll be based on fact, exhaustively researched, and will hopefully win an Oscar for some lucky actress – but big corporations aren’t going to rush things when it comes to a hot-button topic, audience reaction must be gauged and the right balance struck. They certainly won’t be casually dropping a sexual-harassment sub-plot into Aquaman 2 – but Countdown does exactly that, adding a workplace rapist to Quinn’s other problems. The fact that he’s extraneous to the plot, or that the sub-plot isn’t even resolved properly (Quinn still has access to the hospital, despite being suspended), is entirely irrelevant. The point is that it makes the film more interesting – especially, perhaps, for a teenage viewer who may be getting her first visceral impression of how harassment works from this movie.

Countdown isn’t very good; I know this because I dutifully made notes about assorted tasty details, all of which ended up going nowhere. Early on, it seems to be pointing up our obsession with healthy living (jogging, counting calories, etc), as though we were trying to ‘cheat death’ – but that never dovetails with the actual plot, in which death is apparently un-cheatable. Later, there’s a glimpse of how precious time becomes once you know precisely how much you have left of it – a poignant idea but again, nada. The film gets surprisingly religious for a while, then tries a couple of false endings before the real, not especially convincing ending. There’s a cool priest (“The Bible is the ultimate graphic novel!”), a superbly snarky hacker, and a nutter in a bar going on about Antarctica. Like I said, all over the place.

Admittedly, it’s not a complete wash as a horror movie. The first half-hour especially, before it gets too silly, is often eerie; Dec wisely parcels out information, so it takes a while to work out the rules of the game. Why does the app send notifications about the soon-to-be-dead having ‘broken the User Agreement’? What would change if they hadn’t? A prologue illustrates that a dead girl would’ve died anyway – but how, in fact, did she die? It clearly wasn’t by apparent accident, like in Final Destination.

I won’t spoil the film by answering those questions – but in fact I can’t spoil the film, because those questions aren’t conclusively answered. Its ‘universe’, in MCU-speak, is full of holes. Does the curse only attach itself to those feeling guilt over loved ones? Would it go away if they worked through their issues? Why set a time of death at all, if it could kill them at any time? (I guess it worked in The Ring.) What if someone suddenly slit their own throat without warning? Countdown is charmingly flawed – but it’s also a cynical exercise, a half-baked thriller based on the lazy excuse that ‘Kids won’t care if it’s stupid’. If you’re an adult, you can probably skip it. If you’re a teenager, be careful; it’s murder out there.

Around 130 meds still out of stock in private pharmacies