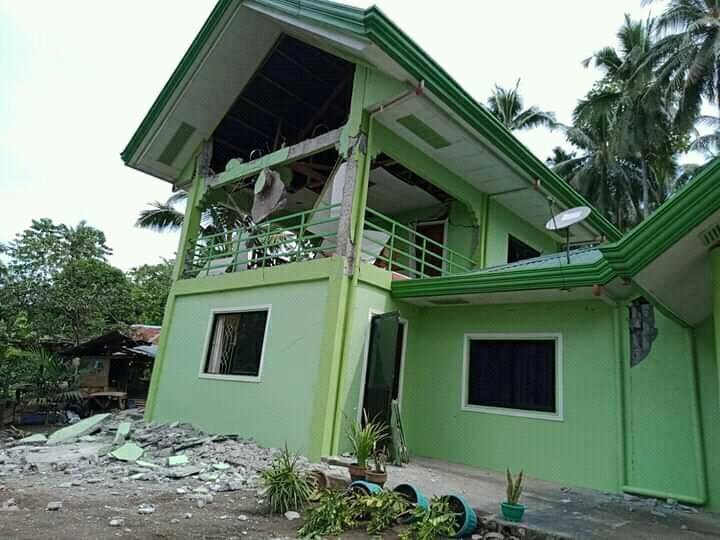 A damaged local town hall is seen in Mabini, Davao Del Sur, Philippines after a magnitude 6.6 earthquake struck Octiber 29, 2019 in this picture obtained from social media. Jaypee Catalan via REUTERS ATTENTION EDITORS - THIS IMAGE HAS BEEN SUPPLIED BY A THIRD PARTY. MANDATORY CREDIT. NO RESALES. NO ARCHIVES.

An earthquake of magnitude 6.6 sent people scrambling on Tuesday as it shook buildings and disrupted power supply in the central area of the Philippines’ southern island of Mindanao, killing at least two and injuring dozens, authorities said.

The quake, which struck at 9:04 am (0104 GMT), opened cracks in buildings and showered debris on a 66-year-old man and a 15-year-old student, killing them, police and disaster officials said.

“The earthquake was very strong,” Abi Agduma, a shopkeeper on the island, told broadcaster DZMM radio. “We ran outside our home. I looked at our store and our house, and they looked like they were dancing.”

She added, “My knees are still shaking.”

Power cables swayed in Davao city, the hometown of President Rodrigo Duterte, where people rushed to open spaces, while some fainted out of fear. The quake also triggered power cuts in nearby General Santos city, media said.

“Inspection is ongoing and the disaster risk office is checking our roads and bridges,” Sara Duterte, the mayor of populous Davao City, which was also shaken by the quake, told the ANC news channel.

She is the daughter of Philippine leader Rodrigo Duterte, who was for many years himself the city’s mayor.

Some schools in the area have suspended classes. Disaster officials said they were monitoring the situation, as further information on damage and possible casualties trickles in.

Earthquakes are common in the Philippines, which is on the geologically active Pacific Ring of Fire.

The quake, whose magnitude was initially put at 6.7 by the European-Mediterranean Seismological Centre, was the second powerful quake to strike Mindanao in two weeks.

A quake of magnitude 6.3 on Oct. 16 killed seven and injured more than 200, the Philippine disaster agency said.