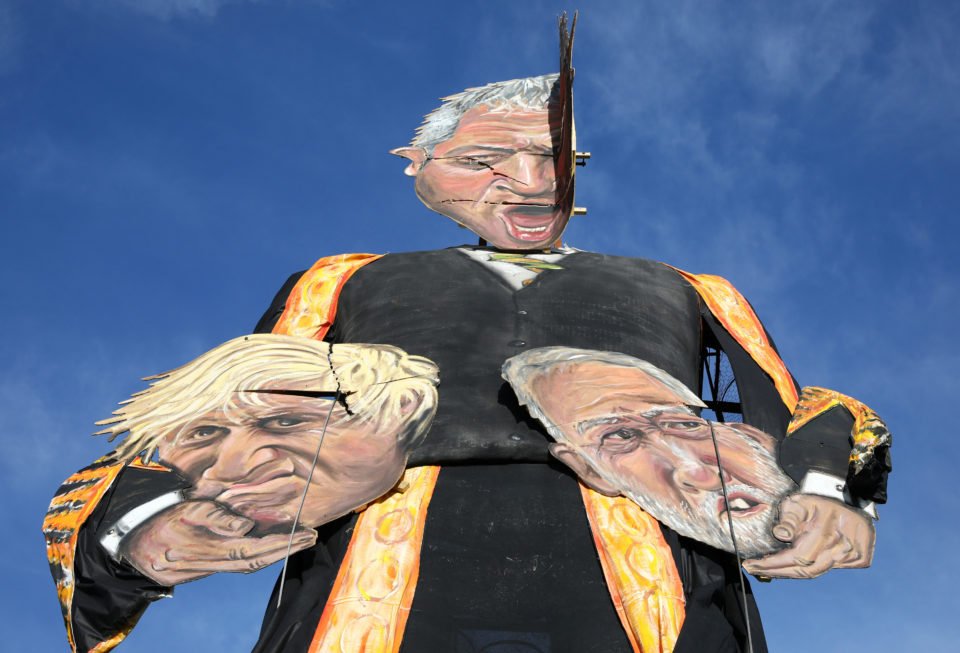 The phoney war is over. After months of rehearsing his election strategy, British Prime Minister Boris Johnson is poised to run a high-risk campaign designed to exploit divisions over Brexit despite his public appeals for national unity.

Ahead of the Dec. 12 vote, he will focus on portraying his new Brexit deal with the European Union as a victory for a leader who many said would be unable to win concessions from Brussels and would instead leave without an agreement.

Central to the election campaign will be the message that only Johnson can finish the job of leaving the EU, two sources close to the campaign said.

It is a stance the former foreign minister and London mayor has used with varying degrees of success since becoming prime minister in July, after his predecessor failed three times get parliament to approve her own Brexit deal.

Johnson’s deal secured initial parliamentary approval, though its passage remains uncertain. In the election, he hopes to win a parliamentary majority – something he does not currently enjoy – to push the agreement through.

To win the election, rather than uniting the people, one source said, Johnson’s Conservative Party wants to tap into divisions over the EU, hoping to fire up voters who backed leaving by offering them an early taste of the so-called “Brexit dividend” – for example, funding promised for healthcare from savings generated by quitting the EU.

It is a narrative that pits those who back Brexit against the “establishment” – parliament, the courts and big business – which Johnson says is trying to frustrate the “will of the people”.

“It’s the outsiders versus the insiders,” said one veteran party member.

It involves making a play for English regions which traditionally vote for the opposition Labour Party but also back leaving the EU, in order to counter a challenge from the Brexit Party led by veteran eurosceptic Nigel Farage.

According to one source, the party will focus on around 40 constituencies, or voting districts, in central and northern England which voted to leave the EU.

Another Conservative campaigner said highly effective social media campaigning used in the 2016 referendum was also being deployed – resulting in one lawmaker being contacted by 200 voters he did not have in his database.

Johnson looks to be in a strong position, leading in opinion polls and with much higher personal ratings than his main opponent, Labour leader Jeremy Corbyn.

But waging a Brexit election is also a risky move – Johnson could deepen divisions in the Conservatives and is betting on widening the party’s appeal in a country where traditional political allegiances have been shattered by the 2016 decision.

His predecessor, Theresa May, called an election two years ago when riding high in opinion polls, only to be handed a hung parliament by voters who were unconvinced by an ill-judged campaign.

With polling day only announced on Tuesday, neither party has yet produced manifestos, which will offer a deeper understanding of their strategies for Britain.

But the months spent limbering up for the poll have offered an insight into how Johnson will wage what will be a short campaign before an election which will determine how, when and perhaps even whether Britain will leave the EU.

As prime minister, Johnson, a figurehead for the Vote Leave campaign in 2016, has made delivering Brexit his main focus.

He staked his reputation on “getting Brexit done” on Oct. 31, only to be thwarted by parliament and forced to ask for an extension to his “do or die” deadline.

But one source in his team said Johnson could weather reneging on that pledge.

Focus groups, the source said, suggest that voters will see that he is trying to deliver on his Brexit promise and is being prevented from doing so by parliament.

“The strategy is to woo Brexit Party supporters of all colours, but specifically court Labour leave voters in the northeast and Midlands,” the veteran Conservative member said. The message is “let’s get Brexit done and move on.”

Over 8,000 domestic workers unaccounted for, no clue as to their whereabouts