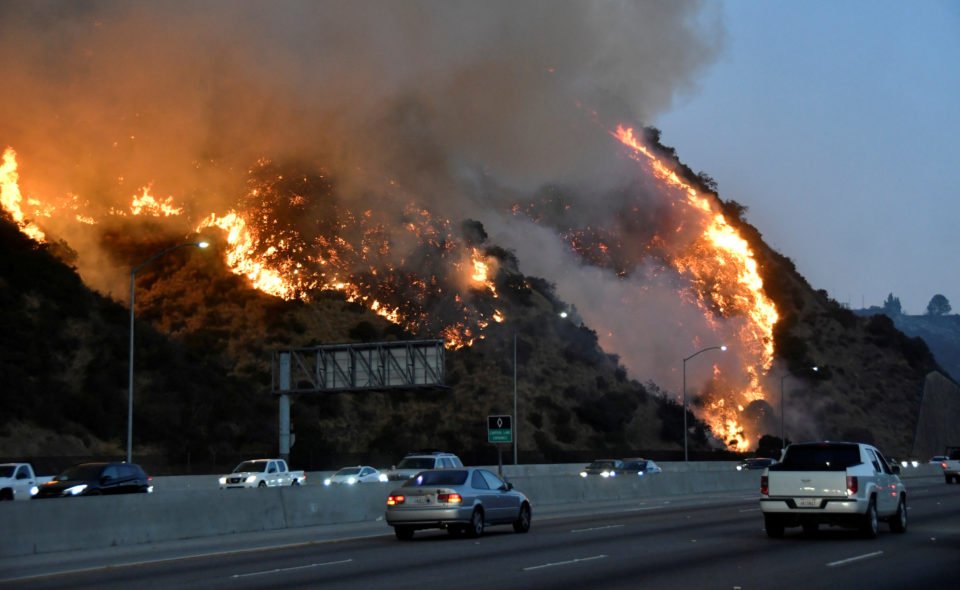 Firefighters braced late on Tuesday for a resurgence of strong Santa Ana desert winds across Southern California after a day of light breezes helped them gain ground against a blaze displacing thousands of Los Angeles residents near the famed Getty Center museum.

City arson investigators reported earlier on Tuesday that the Getty fire was likely caused by a broken tree branch being blown into power lines during high winds early Monday morning.

Electricity remained cut off to roughly half a million homes and businesses in northern and central California on Tuesday as a precaution by the state’s largest utility, while firefighting strike teams and equipment were posted on standy at strategic points throughout the state.

Governor Gavin Newsom, who has accused utilities of failing to adequately modernize and safely maintain their power systems, paid a visit to the Getty fire zone on Tuesday afternoon.

“This is a challenging time,” Newsom told a news conference at a command center in the University of California’s Los Angeles campus, adding that 43 of the state’s 58 counties were “experiencing at or near-historic wind events.”

At the start of the day, firefighters in Los Angeles and those battling a much larger conflagration in northern California’s Sonoma County wine country took advantage of lighter winds to make headway before hazardous winds reemerged.

Fire officials worried high winds forecast to gust to 70 miles (113 km) per hour or more would lift embers from smoldering hot spots and carry them into unburned vegetation, re-igniting and spreading flames anew.

That gave an army of some 1,100 firefighters battling the Getty fire a narrow window for consolidating gains a day after wind-driven flames and embers spread over scrub-covered slopes around some of most expensive homes on the city’s west side.

By late afternoon, crews had managed to confine the blaze to about 650 acres (263 hectares) while carving solid containment lines around 15% of its perimeter, up from 5% a day earlier.

In northern California, where firefighters struggled for a fifth day against a 76,000-acre blaze in Sonoma County’s wine-growing region, high-wind forecasts prompted Pacific Gas and Electric Co to impose a new round of prescribed blackouts for nearly 600,000 homes and business.

That included about 400,000 customers blacked out in a “public safety power shut-off” that PG&E instituted days earlier, the company said in a statement. Tuesday’s power cuts marked the third wave of mass blackouts implemented this month by PG&E.

Announcing preliminary findings of its Getty fire investigation, the Los Angeles Fire Department said the blaze probably started when a tree branch snapped off in high winds landed on adjacent power lines, producing sparks and “arcing” that ignited nearby brush.

The lines, which are operated by the city’s Department of Water and Power (DWP), remained intact, the statement said.

The DWP said the broken branch apparently came from a Eucalyptus tree growing about 30 feet away, beyond the vegetation-clearance zone required by state regulations.

PG&E has likewise been implicated in the latest Sonoma County blaze, dubbed the Kincade fire. The utility acknowledged last week that the Kincade fire broke out near a damaged PG&E transmission tower at about the time a live high-voltage line carried by that tower malfunctioned.

The company, whose mass power shutdowns have drawn harsh criticism from the governor, filed for bankruptcy in January, citing $30 billion in potential liability from a series of deadly fires sparked by its equipment in 2017 and 2018.

Citing progress made against the Kincade fire, Newsom said the number of evacuees in northern California had diminished from 190,000 at the peak of that blaze to 130,000 on Tuesday.

Property losses from the Kincade, listed at 15% contained, were put at 189 homes and other structures, double Monday’s tally.

The size of the Getty fire’s evacuation zone was reduced by roughly 3,000 homes on Tuesday, but residents of about 7,000 dwellings remained displaced, fire officials said. At least a dozen homes have been destroyed so far.