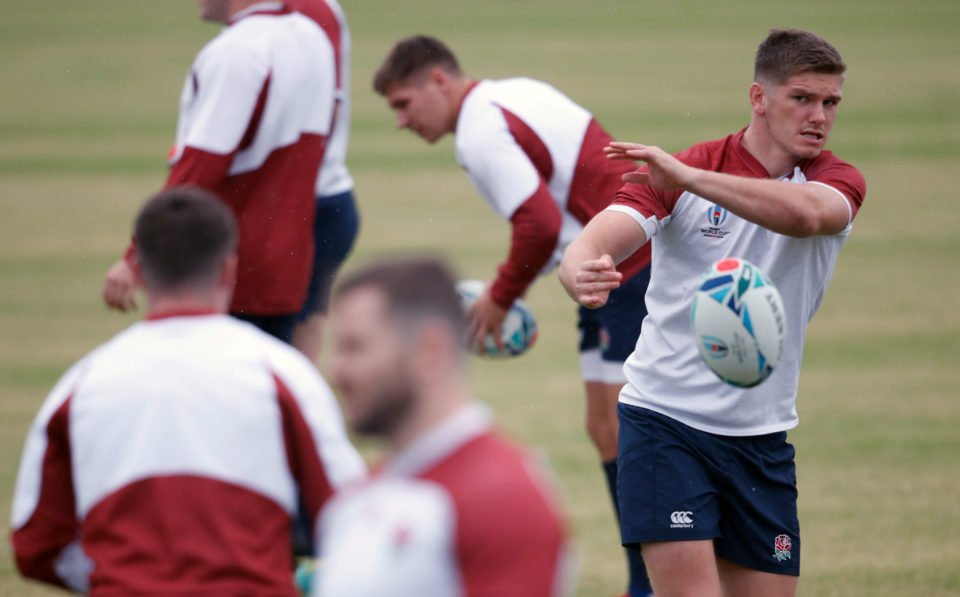 England players train ahead of Saturday's showpiece against South Africa

England have named an unchanged starting team for Saturday’s Rugby World Cup final against South Africa, with the introduction of scrumhalf Ben Spencer on the bench the only variation from the 23-man squad that beat New Zealand.

Spencer, who has 20 minutes of international experience from three replacement appearances, arrived in Japan only on Monday as a replacement for Willi Heinz after he was ruled out due to a hamstring injury picked up in the semi-final.

Winger Jonny May and captain Owen Farrell have both recovered from dead legs, with prop Kyle Sinckler also fit after limping off in the semi-final with a calf problem.

There had been speculation coach Eddie Jones would revert to the lineup he used against Australia, with Farrell at flyhalf to beef up the midfield in the face of South Africa’s physical assault, but he has stuck with the side which produced one of England’s best performances for years to beat the All Blacks.

“We just have to go out and play,” Jones told a news conference on Thursday.

“We know the physical part of the game is going to be important and the players will go into this game well prepared knowing how we want to play. We will go and play with no fear.”

Spencer said he was confident he was up to speed with England’s playbook, having been involved in the squad over the last couple of years, but was still struggling to deal with the shock call up.

“I’ve not really had the chance to process the whole situation yet,” he said. “It’s been a crazy few days, it’s been a brilliant few days, getting back into the squad, it’s been mental, really.

“In terms of jetlag I’ve been OK and I seem to be in the swing of things now, so I’m alright.”

The match is Jones’s 50th in charge and his win percentage of 80% is the best of any England coach. Jack Rowell, who took England to the 1995 semi-finals, is next best at 72%, with World Cup-winning Clive Woodward on 71%.

England are seeking their second title following their 2003 victory while South Africa are looking for their third — the last coming in 2007 when they beat England in the final.

The Springboks named their team earlier on Thursday, with the return of speedy winger Cheslin Kolbe the only change from the team that beat Wales in their semi-final.