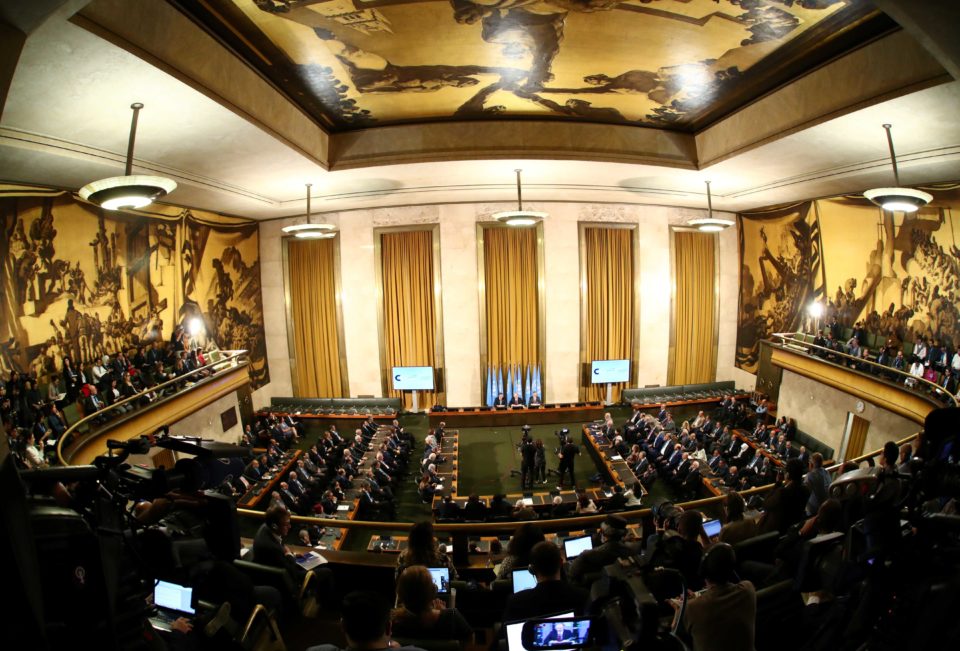 Overview of the first meeting of the new Syrian Constitutional Committee

THE recent initiatives by the United States and Russia to halt the Turkish invasion of Syria presented a crisis with international dimensions, as a plethora of players strive to secure their interests, under conditions of tough competition and rivalry.

Turkey’s military operation, the third successive invasion of Syria, was aimed at creating a security zone in north-east Syria, on her southern border, without Kurdish fighters. Moreover, President Erdogan’s wish to make Turkey a regional superpower and leader of the Muslim world provoked the reaction of Egypt and Saudi Arabia, while Iran, according to President Rouhani, considered that “the way Turkey has chosen is not good” and that “the solution to Turkey’s security concerns about northern Syria is the presence of the Syrian army in the region”. This position strengthens the hand of Syria’s President Assad who is committed to recover the regions he lost during the civil war. The situation is made even more complicated by the fact that Lebanon is entering a circle of political and social instability.

With confusion prevailing in the USA, where the president, ministers and the congress have different appraisals of the Syrian crisis and a Europe at a loss in particular after the German proposal for a security zone under international control, Russia intervened dynamically, inviting Erdogan to a dialogue with a view to settling the crisis. As stated by the Kremlin spokesman Dmitry Peskov the main goal of the Russian initiative was to restore Syrian territorial integrity and to continue political regulation efforts, including the work related to the Syrian Constitutional Committee.

The Sochi Agreement of 22 October 2019 is a text satisfying both sides. It contains, inter alia, the commitment to the preservation pf the political unity and territorial integrity of Syria, but, also, to the protection of national security of Turkey. In this regard, it is expected that the Russian Federation will facilitate the implementation of the Adana Agreement of 1998, which allowed Turkey to intervene in the Syrian territory, up to 15 kilometres. Russian military police and Syrian border guards will enter the Syrian side of the Turkish-Syrian border, outside the area of Operation Spring, to patrol jointly with Turkish forces a 10km zone and to facilitate the removal of YPG elements and their weapons to the depth of 30 kilometres.

In fact, even temporary, if it remains, their presence in the area constitutes a triple sovereignty of Moscow, Damascus and Ankara over Syrian territory. The provision to facilitate the return of refugees in a safe and voluntary manner grants Erdogan his wish to settle in the said zone of northern Syria 3 million Syrian refugees now living in Turkey. This provision sweetens the pill of the Turkish invasion in Syria, since the question of the refugees, used by Erdogan as a bargaining chip, constitutes a nightmare for the Europeans. Finally, the work to find a lasting political solution to the Syrian conflict will continue, within the framework of the Astana Mechanism, along with the support of the activity at the constitutional committee, which was established “due to the joint efforts at Russia, Turkey and Iran – the guarantors of Astana process”, as stated by the Russian Foreign Minister Sergey Lavrov.

It is evident that Russia has assumed the role of peacemaker in the Middle East. At the same time, the Syrian crisis offered Russia the opportunity to increase its authority and influence, the impact of which was felt not only in the Middle East region, but also at the international level. In this regard, we could mention that the Europeans already feel the need for a rapprochement with Russia, a development that will strengthen the efforts to find a solution to the Ukrainian problem. Moreover, to this effect, the opening towards Africa is another example of Russia’s multilateral diplomacy, as was evident from the Pan-African conference held in Sochi, after the Putin-Erdogan meeting on 22 October 2019.

I sought the official Russian position on the Sochi Agreement and the Russian Federation’s Ambassador to Cyprus, Stanislav Osadchiy said the following:

“From the very beginning, Russia’s goal in Syria was to assist this country in fighting international terrorist groups, which if they had won, could have turned Syria into an uncontrolled terrorist enclave that posed a threat to stability and security not only to neighbouring countries, but also far beyond the Middle East region, the Eastern Mediterranean and European continent.

“As for the difficult negotiations between the leaders of Russia and Turkey in Sochi on October 22, our main task was to ensure that the final agreements would meet the interest of Syrian and its population, including the Kurds. But not only this. It seems that the outcome of the talks also meets the interests of European countries, including Cyprus, which is overwhelmed by the burden of migration, as the continued instability at the border threatened the emergence of new refugee flows and, possibly, terror attacks.

“The Sochi agreements, crucial for stabilising the situation in Syria, have demonstrated the possibility and need to organise constructive and results-oriented work with all partners, even with such difficult one as Turkey, in order to find balanced solutions.

“Based on authority and influence of Russia in the region, we intend to work further to restore control of the legitimate Syrian government over the entire territory of the country and its borders.

“The settlement of the Syrian conflict meets the interest of Cyprus and all countries of the region”.

Our View: Abuse of Greek doctors by Cypriot colleagues shames the country