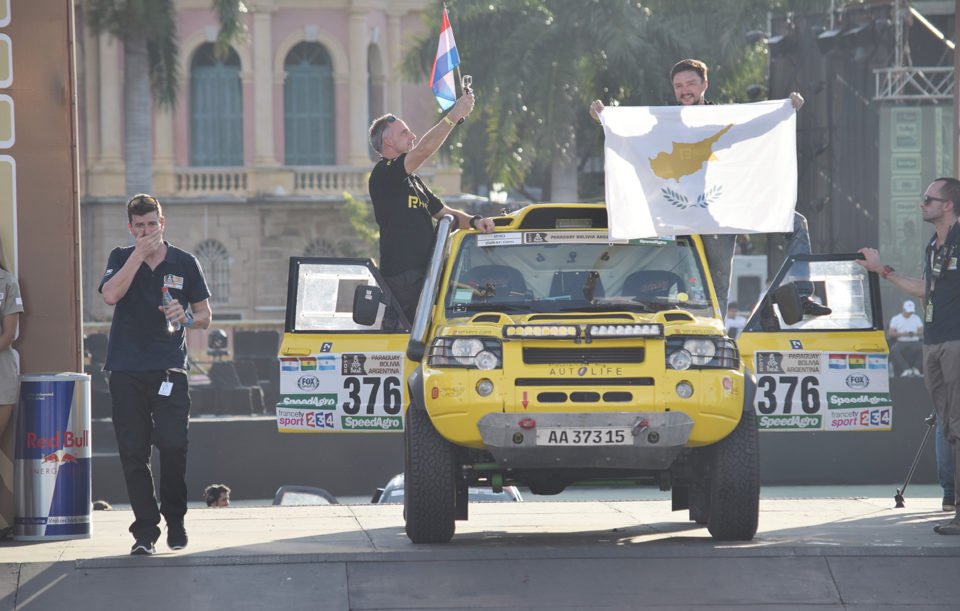 Driving a Desert Warrior by Rally Raid – a custom-fitted off-road car with the body of a Range Rover and a BMW engine – the Autolife team took 45th place in the 2017 Dakar Rally, a respectable result for the first team from Cyprus ever to compete in the gruelling race

In 2017, Autolife Cyprus competed in the Dakar Rally – the first Cyprus team to ever take part. Today, two years on, the same team is set to once more participate in the 2020 event, seeking to better their previous result.

Driving a Desert Warrior by Rally Raid – a custom-fitted off-road car with the body of a Range Rover and a BMW engine – the Autolife team took 45th place in the 2017 Dakar Rally, a respectable result for the first from Cyprus ever to compete in the gruelling race.

Racing from Asunción to Buenos Aires through Paraguay, Bolivia and Argentina, the 491 competitors of The Dakar 2017 raced their 316 vehicles a distance of 9,000km in the space of 12 days.

It was the culmination of a dream for the Team Captain and driver, Russian-Cypriot businessman and founder of the Orpheas Group Roman Starikovich.

Inspired by his own off-road journeys around Australia and South Africa and by close friend Nasser Al-Attiyah, the three-time Dakar champion and world-renowned Qatari sportsman, Starikovich put together a team which included expert co-pilot Bert Heskes of the Netherlands and trainer Annie Seel from Sweden – the most famous female Dakar Rally driver – to take 45th place in a rally few participants manage to finish.

With the original vehicle donated to the Cyprus Motor Museum, the team have sourced a new car for the 2020 Rally.

Calling the car ‘Bumblebeast’ for its black and yellow livery, this Toyota Hilux Overdrive with the body of a Hilux and a Toyota V8 engine, is largely custom-made by the Johannesburg-based specialised racing company Overdrive Custom Bureau.

Already a veteran of the Dakar, ‘Bumblebeast’ – previously owned by a Lithuanian competitor who took part in a number of previous Dakar Rallies – has been completely refurbished in readiness for the race, at a cost of almost half a million euros.

Participation, however, costs almost twice this amount. Including indirect costs – logistics, crew members, participation fee etc – the entire budget for Team Autolife will be close to a million euros.

Originally called the Paris-Dakar Rally, the epic contest first began in 1978. In 2009 the race moved to South America to escape security threats in Mauritania. And in 2020, for the first time, the Dakar will take place in Saudi Arabia.

Running from January 5 to 17, the race will see hundreds of teams – including Autolife, under the flag of Cyprus – racing from Jeddah on the western coast to the city of Al Qiddiya, 40km from the capital Riyadh.

Teams will cross 9000km of blistering deserts and inhospitable mountain ranges in a quest to win one of the most prestigious motorsport events on the planet.

“In my opinion The Dakar is the biggest challenge any man or woman in the world can face in our time of relative peace,” says Starikovich, who will be fielding a multi-national team that includes members from Cyprus, Russia, Greece, Latvia, Poland, and the Netherlands.

“This year marks another historic milestone for Cyprus motorsport, and Autolife Team: Starikovich-Heskes is back on track and set to compete in The Dakar 2020 with a new more powerful racing car, slightly reshuffled international team backing the piloting duo, and undoubtedly greater experience and expertise.”

The ‘easy targets’ for robbery and abuse