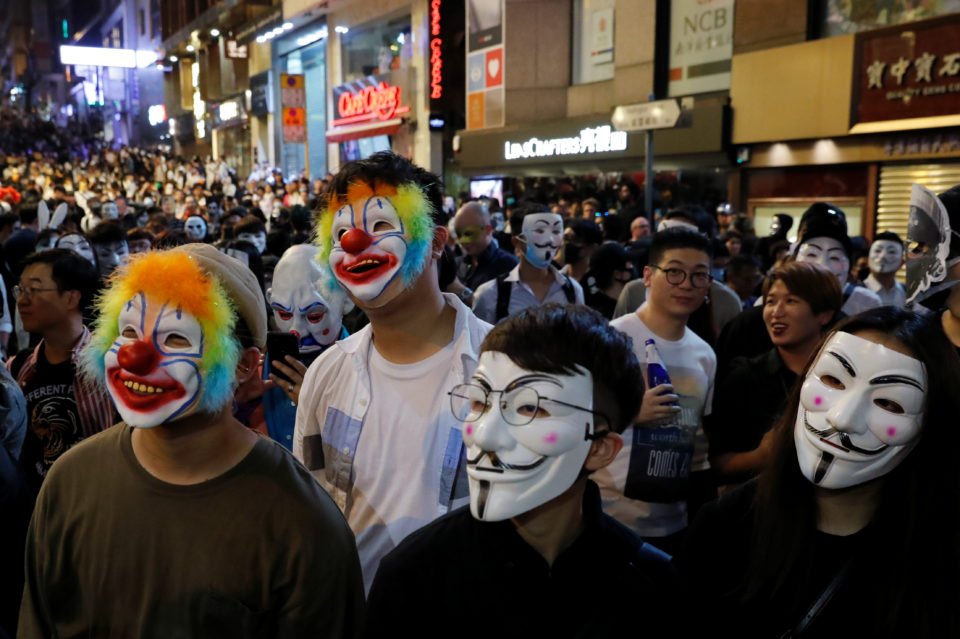 Journalists don’t just travel in packs; they write in packs too. And what they’ve written this week is endless pipe-sucking ruminations about what’s driving the seemingly synchronised outbreak of protests in a large number of very different countries around the world. They can’t see the forest for the trees.

You will doubtless have seen a few examples of this fashion recently. If you lived in the belly of the media beast, like I do, you’d be seeing dozens a day, as journos try to explain the phenomenon with varying degrees of success. Varying from zero to about 1.5 out of ten, in my opinion, but there is clearly something trans-national going on.

A group of young Catalan nationalists walking out the highway to occupy Barcelona airport two weeks ago were chanting “We’re going to do a Hong Kong” as if they shared the same cause.

They don’t, actually. You could even say that the protesters in Hong Kong are anti-nationalists, in the sense that they are defending their freedoms against a regime in Beijing that wants to smother them under a blanket of conformist Chinese nationalism. But the tactics are the same in Catalonia and Hong Kong, and the emotions are too.

A striking thing about the tactics, by the way, is that they have moved on from the strict non-violence that characterised would-be democratic revolutions from the mid-1980s until the early days of the Arab Spring nine years ago.

From the ‘gilets jaunes’ (yellow-jackets) in France who began their protests almost exactly a year ago, down to the protesters in the streets of Chile, Lebanon and Hong Kong today, the majority are still non-violent. However, they cannot control (or maybe just don’t want to control) the minority who throw bricks and flaming bottles at the police.

The police, of course, use violence too: tear gas, rubber bullets, and sometimes guns. People have been killed – in small numbers in most places, but in the hundreds in Iraq and in Sudan. Even bigger blood-baths are possible in Hong Kong (if the regime in Beijing loses its nerve) and in Egypt (if September’s protesters return to the streets).

Another common denominator is that the trigger that sets the protests off is usually something small. The bread price went up in Sudan; metro tickets got more expensive in Chile; a new tax was put on What’s App calls in Lebanon; the price of petrol rose not very dramatically in France a year ago and in Ecuador last month – and the next thing you know, masses of people are out on the street.

Moreover, when the government backs down and cancels the offending law or charge, as has generally been the case after a few days or weeks, the protesters don’t quit and go home. By then their demands have expanded to include things like full democratic rights (Hong Kong, Algeria and Egypt) or an end to a corrupt system (Iraq and Lebanon) or action on huge and growing inequalities between rich and poor (Chile, France, and Ecuador).

Nor do I have answers to these questions, and I can’t bring myself to make the usual trite remarks about global media and imitation, or the lingering and unresolved legacy of the 2008 crash, or the fact that 41 per cent of the world’s population is under 25. However, these events are showing us one important thing: we really do have a global society now.

You could see it taking shape even three decades ago, in the way non-violent revolutions flashed between countries, bringing some form of democracy to the Philippines, then South Korea, Thailand and Bangladesh, and on to Poland, the fall of the Berlin Wall, and the end of the Soviet Union, all in the five years 1986-1991. But the target then was just crude dictatorships; now it’s much broader.

It’s about economic and social inequality as well as political oppression, and increasingly it’s also about generational inequality. Obviously the injustices are more blatant and extreme in Egypt than they are in France, but they are not really very different and the young know it.

Never mind the nationalists and the populists, who are just playing the same divisive old tunes as always. What we have here, despite the multiplicity of languages, religions and histories, is an emerging global society with shared values and ambitions, especially among the young.

There are millions of angry dissenters from this evolving consensus, but for the first time ever we really are becoming one people. That is a comforting thought as we head into the millennial storm of climate change. It couldn’t have come at a better time.

Prophecies about Cyprus dusted off after Turkey’s Syria invasion (Update)