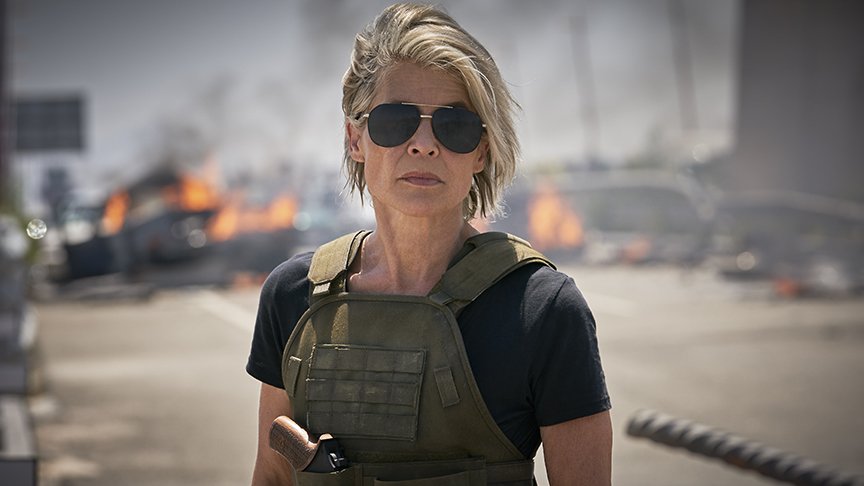 What a strange, lopsided franchise: two genre classics in the 80s and early 90s, then three (now four) uninspired, mechanical retreads in the 21st century – an ironic reflection of the Terminator mythos itself, where the 20th century is human but the future increasingly belongs to the machines. Just because lightning struck twice, with Terminator 2: Judgment Day in 1991, doesn’t mean it’ll ever strike a third time.

Some have compared Terminator: Dark Fate (the sixth in the franchise, and surely the last to co-star Arnold Schwarzenegger) to T2, presumably because they’re both chase movies with similar plots. I couldn’t say for sure, having not seen T2 since the 90s – but certainly, the experience of watching Part 6 now can’t compare to watching Part 2 in the 90s. The special effects were startling at the time, and oddly beautiful, one body morphing (i.e. shape-shifting) into another. Here, on the other hand, the only new tweak is that the Terminator can separate in two, liquefying into his human-looking ‘self’ and leaving his metal endoskeleton behind to do more mundane tasks, like driving cars.

The Term is here from the future, going after Dani (Natalia Reyes) just like his forebear went after Sarah Connor (Linda Hamilton) in The Terminator, 35 years ago – and there’s also a protector from the future, like in Terminator 2, in this case an “augmented” human named Grace (the excellent Mackenzie Davis, who contrives to be both steely and vulnerable). Grace is good, but the relentless machine seems unbeatable – but then Sarah appears in the nick of time, firing a gun, then an RPG, then tossing a grenade and telling Grace and Dani “I’ll be back”. Arnie also appears in his old role (the Terminator having spent the past few years laying low, selling draperies and learning what it means to be human) and quips “I won’t be back”, that iconic line getting quite a workout in this movie. “Come with me if you want to live” also gets a variation, this time from Grace. All a bit cutesy, but I guess it’s fan service.

Hold on, though; didn’t Sarah successfully change the future in previous instalments? How come the machines took over anyway? Turns out the altered future is much the same as the original future, only the offending AI is now called Legion instead of Skynet. “Those assholes never learn!” sighs Sarah – a good joke on humanity’s self-destructive streak though also a bit of a cop-out, barely even bothering to construct a new scenario.

That dearth of ideas is the problem here, and a reason why the film slowly goes from amusing to dull. There’s a glimpse of a border detention centre, and a nod to our modern surveillance society (Sarah is a little bit paranoid), but the only real idea is the trendy patina of glib, just-add-water feminism; indeed – though the marketing doesn’t trumpet it, to avoid a debacle like Ghostbusters – this is really the all-female reboot of Terminator (Arnie gets a pass through being old and poking fun at his macho stiffness: “I’m extremely funny,” he claims with the straightest of faces). The first film was problematic in that Sarah was seen as a breeder, just someone’s mother; “You’re not the threat. It’s your womb,” she explains to Dani with a touch of bitterness. This new film fixes that problem.

Did it need to be fixed? Sure, why not – but we need more, not just Hamilton doing her best Joan Jett badass (“I’m wanted in a couple of states… 50, actually”) and occasionally looking daggers at Arnie. Even the action is inadequate, falling into the trap laid by Hollywood’s compulsion to build bigger, better monsters. This new Terminator is almost indestructible; no matter if you shoot him, crush him, burn him, he keeps coming back. The only answer – what our heroes should be doing, if only to establish their humanity – is to trick him, think outside the box, do something clever. (Doesn’t have to be madly clever, just a fix that doesn’t involve brute force; even the ending in Aladdin, when Jafar got tricked into wishing himself into a genie, was smarter than this, and that was in a kids’ movie.) Alas, Terminator: Dark Fate has no truck with such fancy ideas – so instead we get endless, expensive set-pieces, with explosions and gunfire and hand-to-hand combat and the cyborg apparently vanquished, only for the liquefied bits to coalesce into humanoid form again, and it’s back to square one. You just want to yell at the idiots onscreen: ‘You can’t kill him that way! Stop trying!’.

Dark Fate isn’t the worst of the franchise, by any means (the dour Terminator: Salvation, with Christian Bale at his most grumpy-looking, gets my vote); it’s just so-so, with Davis as the only real asset. You may wish the whole film were about this bright, sometimes snarky young woman – but instead the powers-that-be keep trying to extend a moribund franchise, making blunt, unremitting, action-packed Terminator sequels in the hope that one will eventually land. Those assholes never learn.

Car thefts in Cyprus on a par with Ireland per capita