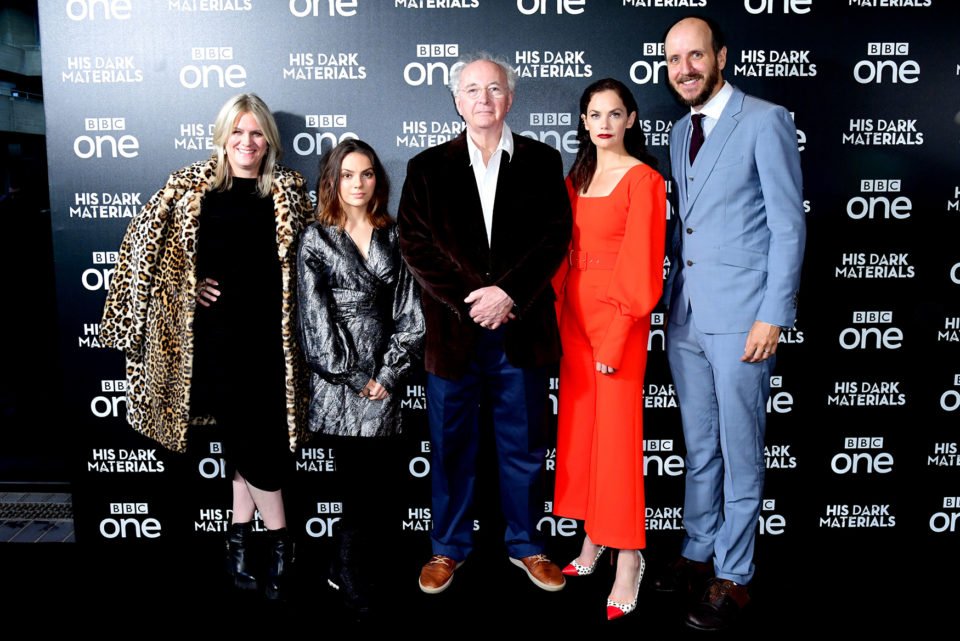 His Dark Materials, Jack Thorne’s adaptation of Sir Philip Pullman’s acclaimed series of novels, will have its global premiere on BBC One on Sunday. We speak to stars including Ruth Wilson and James McAvoy, plus exec producer Jane Tranter and writer Thorne to find out more

James McAvoy is trying to answer a simple question: Is he a geek or not?

The Scottish actor, who turned 40 this year and is reported to have recently said “I do” for a second time, certainly doesn’t look like what you may describe as “geeky” or “nerdy”.

He’s confident and still showing off the muscled, sculpted physique he gained for recent big-screen roles including Glass.

McAvoy’s latest stint sees him step away from the big screen and on to the British small screen to star in the BBC One adaption of Sir Philip Pullman’s His Dark Materials.

Sir Philip’s books have gained him a legion of fans, hence the question put to McAvoy about the geekery of it all.

He muses: “I don’t know if I am outwardly or physically geeky or a nerd or anything like that but this kind stuff is so far up my ‘strase’ it’s not true.

“I’ve read the trilogy three times… and I just listened to Philip’s narration of it, for the second time…”

His tone livens up as he adds: “I just read the final or the latest Dresden Files, that’s some high level geekery…”

Another thing that needs answering, though, is how the cast – which includes Ruth Wilson, Dafne Keen, Lin-Manuel Miranda, Anne-Marie Duff and Clarke Peters – felt about bringing this from the pages to the small screen. After all, it was already adapted into a film starring Nicole Kidman and Daniel Craig in 2007.

For executive producer Jane Tranter, it’s a project she’s had in her sights for many years. She recalls readingthem as they were written by Sir Philip, and wanting to adapt them at the time.

“But the rights had gone, they were taken by New Line to make into the film The Golden Compass so I sort of went back into my shell a bit,” she says.

“Then I went to the see the film and came out of my shell and thought, ‘Do you know what, maybe if I just keep going at this, maybe one day I will get the rights to make this…’”

“I am a great believer that timing often is right when it’s right and really, if I had made these books in the early 2000s for the BBC, it would have been for tea time television with puppets, which would have been a disaster.

“I really had to wait for television to go epic and for Game of Thrones to happen and for myself to work in Los Angeles for eight years and really see how you could build a large-scale TV show.”

The resulting TV show tells the story of Lyra Belacqua (played by Keen) who lives in Oxford among the scholars and staff of Jordan College. She’s there at the behest of her uncle Lord Asriel (played by McAvoy) and ends up on an adventure that will see her cross paths with astronaut Lee Scoresby (played by Miranda) and the villainous Mrs Coulter (played by Wilson).

For Hamilton creator and actor Miranda, it was an immediate yes over a dinner with Tranter and writer Jack Thorne once they told him about the project.

In London shooting Mary Poppins Returns at the time, he explains: “There was no thinking about it. I first read those books when my wife and I started dating. It was within that courtship period where you start reading things together, and there are certain shared things that stay with you.

“This is a very beloved series that my wife and I have re-read many times. I got home from dinner barely able to believe what we had just talked about. ‘I’m going to be him,’ I thought. It was a real thrill.”

Another element that enthused the cast was the CGI techniques used to create their daemons, the animal that represents each person’s ‘inner self’ and is bound to each character.

She says: “It’s the expression of your soul and when you’re a child, it changes because you still change and then it fixes when you’re an adult, into what most looks like your personality. Lyra is a kid so her daemon still changes, but it’s mostly an ermine and his name is Pantalaimon.”

British actress Wilson, known for her small screen roles in The Affair and Luther, reveals she hadn’t read the books when she was approached for the role.

“I was like, ‘Who is Mrs Coulter?’, completely ignorant and my agent was like ‘She’s the all-time great, female literary villain. You have to do this,” she explains.

Was there pressure in taking on the role and the adaptation?

“Yes, (there was an) enormous amount of pressure to fulfil what Philip has written on the page and she’s so mysterious and unknown and enigmatic.

“It’s funny because when you are first shooting, you are just getting on with the job and of course these last few months, when you start to realise what you are putting out there into the public and how many fans are out there and how many people love these books and how extraordinary they are, you start to go, ‘Oh dear, I hope they like it.’”

Screenwriter Thorne, whose writing credits include Shameless, Skins and the stage show of JK Rowling’s Harry Potter and The Cursed Child, also felt the pressure in adapting the books for the small screen.

He says he was “terrified all the way through”.

“When you are adapting books, there are two possible books you get the opportunity to adapt. One is one that has got an amazing story but there might be flaws in it that you can fix.

“The other (ones) are stark works of genius. This is a stark work of genius and being given the responsibility to translate that to screen, you don’t want to be the person that gives the world a damp rag.”