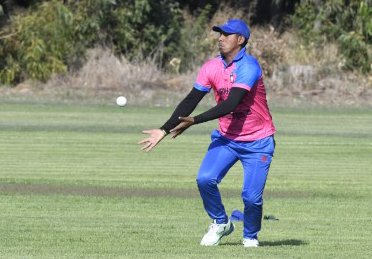 The two heavyweight teams in group B of the 2019 CCA #MoneyGram T20 Cup met on Sunday at Happy Valley in a game which highlighted the claims of Punjab Lions as potential cup winners.

Rehman, who is having a wonderfully consistent season, helped Riyaan to 146 in their 20 overs, but Punjab Lions lost only three wickets in chasing down their target.

A strong partnership between man of the match Zeeshan (65) and Tiwari, who made 38 to follow his two wickets, helped the Lions to a convincing victory, although the winning runs were scored with only two balls remaining. Riyaan were punished with penalty runs for a slow over rate, which proved costly in such a tight finish.

There was another close game in group A at Ypsonas, where CTL College continued their unbeaten start against Amdocs with a two-wicket win. Amdocs started steadily with only 42 runs from the first 10 overs, but accelerated through their captain Pankaj’s 41, with good support from Panghal (28) to reach a competitive total of 129 for 8.

The College reply began disastrously, losing three wickets in the second over. But they continued to score above the asking rate, and had 70 on the board at the halfway point.

But they had lost 7 wickets in the process, and Amdocs looked favourites to win the game. However Gopi had other ideas and shepherded the tail-enders to victory with some superb running between the wickets, and an audacious ramp shot.

Victory was achieved with seven balls to spare, which was cruel on Panghal who followed his batting by taking 5 wickets, earning him the match award.

The Limassol Derby between Gladiators and Sri Lanka Lions turned out to be surprisingly one-sided. Gladiators made what seemed a satisfactory score of 162 for 7, thanks to 44 from the in-form Sadiq, 56 by the returning-to-form Shahid, and 29 from Abbas.

This target was made to look easy by a century opening partnership for the Lions between Sandun (51) and Sanjeev, who took the match award for his unbeaten 53. The captain, Nalin, chipped in with 21 not out, and with the help of 39 extras the Sri Lankan team reached victory in the 17th over.

Car thefts in Cyprus on a par with Ireland per capita