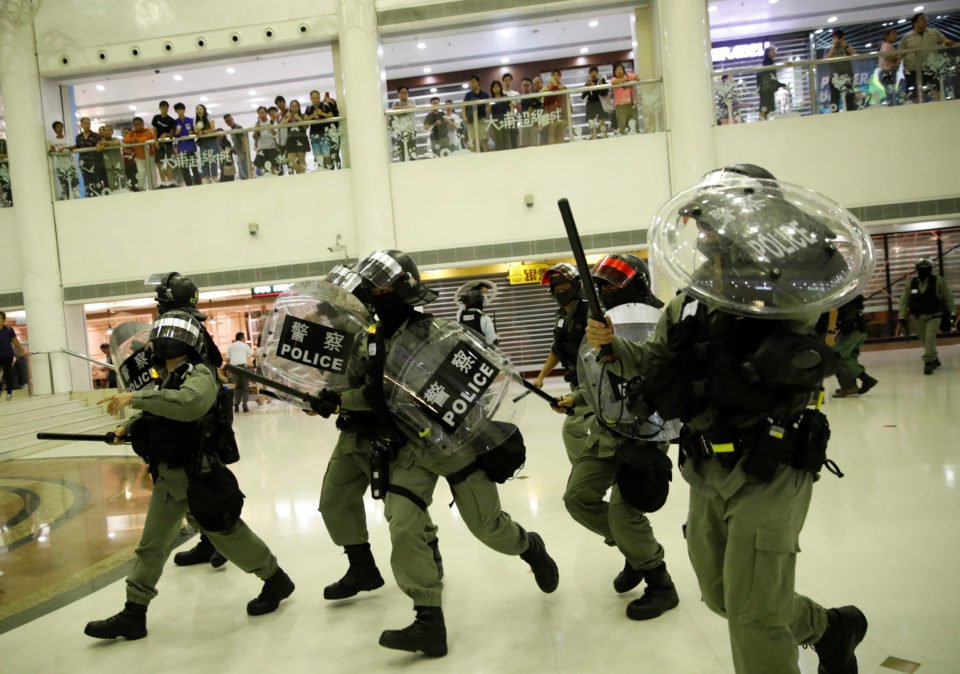 By Twinnie Siu and Donny Kwok

HONG KONG, Nov 4 (Reuters) – Three people were in critical condition in Hong Kong on Monday, authorities said, after a weekend of chaotic clashes with anti-government protesters that led China to call for a tougher stance to end months of unrest in the Asian financial hub.

The injuries were the result of yet another weekend of violence in the former British colony. Riot police stormed several shopping malls packed with families and children in the eastern suburb of Taikoo Shing on Sunday, including Cityplaza.

Protesters there had initially formed a human chain before facing off with police in skirmishes up and down escalators and spraying graffiti on a restaurant.

A man with a knife slashed several people and apparently bit off part of a politician’s ear. The wounded included a man believed to be the knife-wielder, whom protesters had beaten with sticks.

The city’s Hospital Authority said three people were in critical condition, with another in serious condition, among a total of 30 injuries from Sunday.

A student at Shue Yan University was hit by a tear gas canister and suffered a severe burn in a separate incident at the weekend, the university’s student union said in a statement.

While the Chinese-controlled city and its many businesses function normally during the week, many protests have sprung up spontaneously at weekends over the past five months.

Pro-democracy protesters are campaigning against what they see as Chinese meddling with Hong Kong’s promised freedoms.

China denies doing so and has blamed Western countries for stirring up trouble.

More demonstrations are planned this week as the protesters keep up pressure for demands that include an independent inquiry into police behaviour and universal suffrage.

“We really see that people are very heavy-hearted. They don’t know what is going to happen tonight or maybe the next weekend. And there is a lot of worry,” pro-democracy lawmaker Charles Mok told Reuters.

Protesters have circulated plans on social media to mark Guy Fawkes Day on Tuesday by putting on now banned face masks in areas around Hong Kong.

Many people taking to the streets in recent weeks have worn the white, smiling Guy Fawkes masks made popular by anti-establishment hackers and by the film “V for Vendetta”.

The masks have also become common at protests globally, including in Britain and across the United States.

Protesters have largely ignored the ruling and worn masks.

The protests have divided Hong Kong and undermined its economy, with the police coming in for particular scrutiny.

“Civil servants are ashamed of the crimes committed by the Hong Kong police force and the dictatorship of the Hong Kong government,” said the Citizens’ Press Conference, a pro-democracy group that plans a discussion on the clashes later on Monday.

Chinese state media called on Monday for a tougher line against the protesters who vandalised state-run Xinhua news agency and other buildings, saying the violence damaged the city’s rule of law.

Protesters smashed doors and windows and threw petrol bombs at Xinhua’s office on Saturday in some of the worst violence in weeks. They also set fire to metro stations and vandalised buildings, including an outlet of U.S. coffee chain Starbucks.

The city’s Foreign Correspondents’ Club expressed grave concern at the attack on Xinhua, stating that news organisations and journalists must be able to work in Hong Kong free from fear of attack and intimidation.

Mainland businesses, including banks or companies seen as supportive of China’s ruling Communist Party, have been targeted by protesters angered by China’s perceived meddling since Hong Kong returned to Chinese rule in 1997.

Tear gas accidentally aimed at a fire truck on Saturday had been intended to disperse rioters, police said.

“There was misunderstanding in the verbal communication between both sides,” they said on Monday. “The matter was tackled and resolved at the scene.”

Protesters block roads in Beirut, other parts of Lebanon (Update)