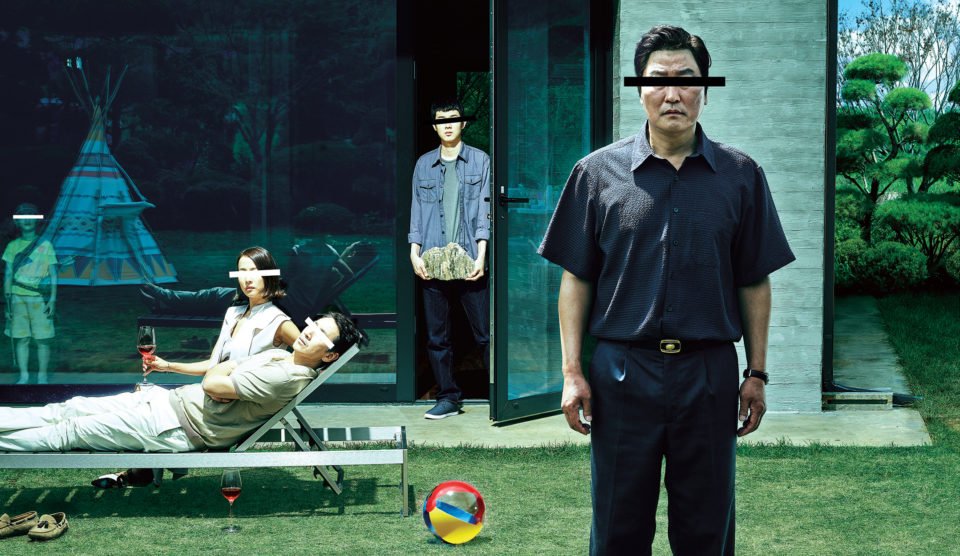 We waited years for a Japanese film to win the Golden Palm at Cannes then subsequently open in Cyprus cinemas, but it finally happened with Shoplifters. Then we waited one more year for a Korean film to win the Golden Palm and subsequently open in Cyprus cinemas – but it happens this week with Parasite. (We’ll actually have to wait a few more days; the film opens on Thursday at the Pantheon, with Greek and English subtitles.) The two films have more than a top festival award and geographical proximity in common. Both revolve around a slightly disreputable – but very close-knit – family of hustlers, though the tone is admittedly quite different. Shoplifters was cosy, humane, and a little bit staid; Parasite is a sharply satirical, highly enjoyable thriller with a good deal of swagger, if perhaps slightly hollow.

“This is so metaphorical,” young Ki-woo (Choi Woo-sik) says more than once – and I guess it is, though it’s also rather blatant. Ki-woo and his family, the Kims, are the titular parasites, not just leeching off a wealthy family – the Parks – but caught in a symbiotic relationship: the Parks support the Kims, lifting them out of their squalid unemployed existence in a semi-basement flat, but in fact the Parks are happy to do it, blissfully unaware that their driver, their housekeeper, their daughter’s tutor and their son’s ‘art therapist’ all belong to the same family. “They smell the same!” says the little boy, picking up that semi-basement reek, but his parents are embarrassed. They’re parasites too, in a way, living empty lives off the backs of ordinary people.

It takes about 45 minutes for the scam to be set up, which is arguably too long. There’s a slightly laboured quality to the first act – though it gives us a chance to meet the Parks, hard-nosed Mr. Park who’s mostly fair-minded but doesn’t like his staff “crossing the line” and weak, rather gullible Mrs. Park, twittering on about her son’s artistic genius (“He has a Basquiat-esque sense, even at age 9!”). “She’s rich, but still nice,” marvels Mr. Kim later (he’s played by Song Kang-ho, probably the best-known of all Korean actors), but his wife disagrees: “Nice because she’s rich,” she corrects, adding that “money is an iron”, it takes out the creases. The Parks keep neuroses primly hidden, living on a hilltop and basking in the sunshine in their front garden; the Kims laugh and argue and live underground, with the rest of the basement-dwellers.

There’s a twist, of course, which I won’t spoil here. Director Bong Joon-ho dealt with class struggle before, in Snowpiercer, though in that film, which was set on a train, the physical divide was horizontal (front/back) whereas here it’s vertical (up/down). The only real question is where Parasite goes after establishing that divide – and it’s fair to say that it goes into anarchy, working-class solidarity turning out to be a chimera. A rain falls, the Kims’ seedy neighbourhood turned into waterlogged chaos (there’s a striking, orange-filtered shot of the dank Dickensian warren criss-crossed by cables; the very opposite of the clean lines in the Parks’ comfy home), then Mr. Kim – asked by his son what the plan is – wearily replies that there’s no plan, and that’s how it should be. “People shouldn’t make plans. With no plan, nothing can go wrong.” It doesn’t get more hopeless than that.

Parasite goes down easily enough; it doesn’t have the wild shifts of Snowpiercer, though the tone swings from knockabout comedy to shocking violence. Easy to see why such an accomplished movie won the top prize at Cannes (unanimously, too) – yet pinning it down remains elusive. Why the emphasis on performance (the kids coaching Mr. Kim on what to say, Kim pretending to be mad at his wife)? Is Bong’s point that everyone is acting, that class divisions are assigned roles more than anything? Yet the difference, in the end, boils down to something very visceral – that aforementioned smell, like “when you boil a rag” says Mr. Park, the smell of poverty and damp stuffy homes, the smell of people who go on the subway. It’s as though capitalism – the wealth gap, our polarised world in general – has created two different species, warily sniffing at each other in the jungle, able to live together but no longer recognising themselves in the other. Hopefully it’s just metaphorical.

In Korean, with Greek and English subtitles.

Remand for wanted man flown back to Cyprus (updated)

Due diligence was once again ignored?