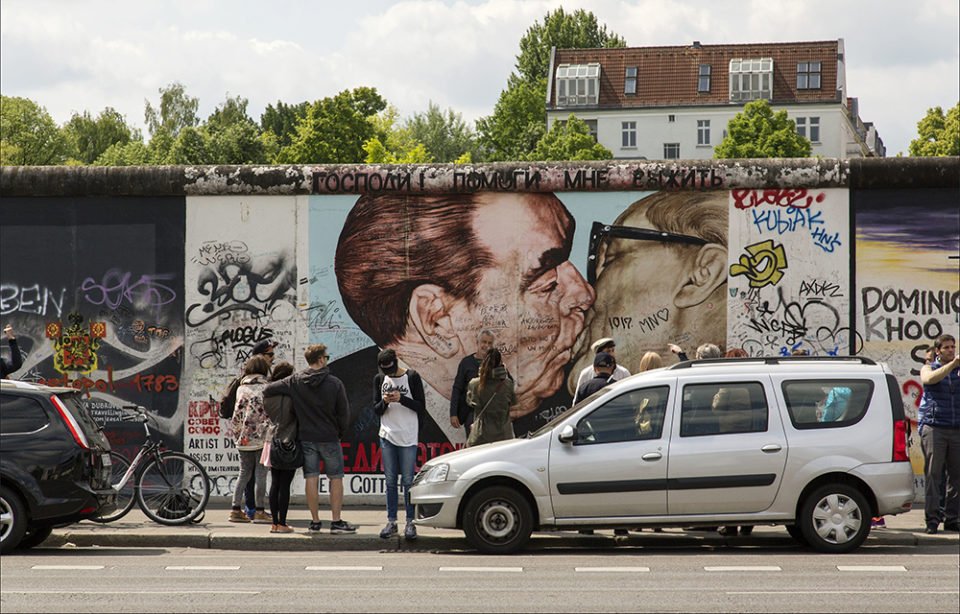 A Generic photo of the Fraternal Kiss mural on the East Side Gallery. iStock

Luke Rix-Standing looks back at the hated wall that divided families, loyalties and a continent

IT IS difficult to fully comprehend the emotion that must have accompanied the fall of the Berlin Wall. On November 9, 1989, the 28-year-old barrier was joyfully dismantled, mostly by members of the public, as East Germans streamed into the West, free to travel for the first time since 1961.

In parts of the city the air was soon filled with the tap-tap-tapping of so-called ‘wall woodpeckers’, chipping away at the concrete slabs with hammers, chisels, and even screwdrivers, while thousands flooded through now unmanned checkpoints to reunite with long-lost relatives and friends.

In the event, the big bad wall had gone not with a bang but a whimper. After months of mass protest, a poorly briefed official announced – erroneously, as it turned out – that visa restrictions would be immediately eased, prompting crowds tens of thousands strong to furiously demand that the gates be opened.

From construction to destruction, we plot the course of Europe’s most divisive and defining structure of the 20th century…

Why was the wall built?

By closing the Berlin border, the East German authorities (GDR) were sewing up a giant tear in the iron curtain. The national border had been closed for some years, while, with no physical barrier and an active subway system, Berlin was becoming a bottleneck through which East Germans were defecting to the West with relative ease.

In total, some 3.5 million East Germans fled the country between the division of Germany at the end of the Second World War, and the rise of the wall – roughly 20 per cent of the population.

East Berlin was operating a planned economy, in the style of its Moscow paymasters, and was hardly flourishing next to the Wirtschaftswunder (‘economic miracle’) in the West. Amid well-placed fears of Sovietisation, the young and educated were fleeing in droves, and recent estimates suggest that the exodus cost East Germany around $8 billion in lost manpower.

In 1958, future Russian premier Yuri Andropov wrote a letter to the Central Committee about the so-called ‘brain drain’. “The flight of the intelligentsia,” it read, “has reached a critical phase.” Haemorrhaging doctors, teachers, and technicians, East Berlin and Moscow agreed that something must be done.

The ensuing wall became symptomatic of communism’s iron will, but it was also its worst advertisement – a supposedly defensive rampart built not to keep people out, but to keep them in.

On June 15, 1961, First Secretary of the GDR State Council Walter Ulbricht told a press conference in East Berlin that “no one has any intention of erecting a wall”.

Just a few weeks later, the morning of August 13, residents awoke to find that barbed wire had been rolled out across the border overnight, and that roadblocks had taken over main thoroughfares. Built narrowly within East German territory to avoid encroaching on allied land, the wall ringed West Berlin completely, at a length of 156.4 kilometres.

Construction commenced at quite staggering speed. The finished product featured not one, but two physical barriers sandwiching a so-called “death strip”, a gravel-covered no man’s land which provided clear lines of sight and fire should anyone attempt the crossing. At different points the defences included attack dogs, ground spikes, anti-vehicle trenches, and bunkers filled with border guards.

Berliners were left in shock. Families were divided, livelihoods wrecked, visitors trapped, and central Berlin again ruptured by watchtowers and weaponry. Willy Brandt, then mayor of West Berlin, compared the wall to a concentration camp, and issued an impassioned plea to East German authorities “not to shoot your fellow countrymen”.

For Gunter Litfin, a 24-year old tailor and East Berlin resident, the wall was particularly troubling. He had just taken on an apartment near his workplace in the West, and had been there decorating only the day before.

With all land routes to his new home blocked, he elected to swim for it, hoping to elude detection in the murky waters of the River Spree. He made it all the way to the opposite bank before he was shot in the back by East German police. Litfin was buried in East Berlin under the watchful gaze of the Stasi, the victim of a ‘tragic accident’.

Roughly 250 more people died while attempting to reach West Berlin. The last of them, Winfried Freudenberg, fell to his death from a homemade hot air balloon, just a month before the wall was reduced to rubble.

He had no way of knowing that the border would suddenly open – it caught people and government equally by surprise. In the same year Erich Honecker, the hard-line leader of the GDR, told journalists that “the wall will be standing in 50, even 100 years”, and even the West’s most informed commentators failed to predict its imminent demise.

There’s a near-infinite number of ways to interpret the legacy of the wall, and we’ll leave most of the them to the historians, but there’s no doubting its impact on popular culture, and on modern Berlin.

On mainstream screens, it’s unsurprisingly an emblem of oppression. Consider the closing scenes of Bridge of Spies, a Cold War drama centring on spy swaps, in which protagonist Tom Hanks watches from a train window as children symbolically scale a garden fence to play with their peers.

For a slightly subtler take, see German tragicomedy Good Bye Lenin! – in which a devoutly socialist mother falls into a long coma and misses the fall of the Soviet Union. Afraid that she might not survive the shock, her children attempt to hide all signs of the new world order from her.

Today, uniformed actors stand at Checkpoint Charlie, peddling fake passports and posing for photos with tourists, a source of moral outrage for many who lived through the reality. For most visitors, the wall itself is the highlight, particularly the painted slabs still standing tall at the famous East Side Gallery.

Among the iconic graffiti there’s a German flag overlaid with the Star of David, a Soviet-era Trabant car crashing through the concrete, and the famous ‘Fraternal Kiss’, a sloppy smooch between Honecker and former Soviet premier Leonid Brezhnev.

One painting, among the first to grace the wall in 1990, features a seven metre speech bubble, which says: “Many small people, who in many small places do many small things, can alter the face of the world.” Thirty years ago, they did.