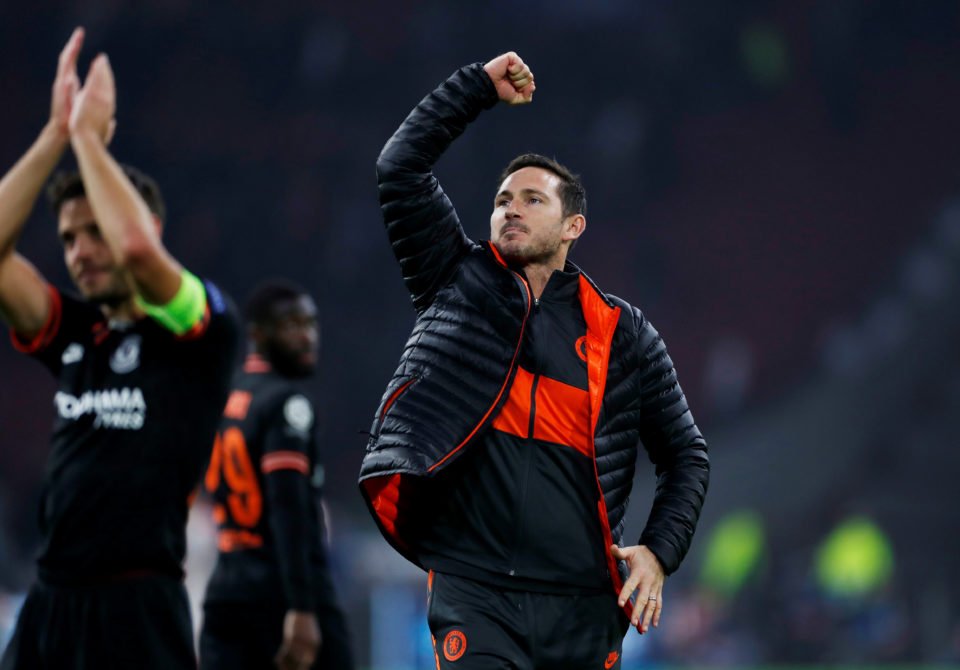 Frank Lampard has warned Chelsea he expects an even tougher encounter with Ajax than they faced in Amsterdam.

Michy Batshuayi’s late strike drew Chelsea level with the Dutch champions at the top of Group H, and another win on Tuesday night would leave them with one foot in the next round.

However, Lampard said: “I wouldn’t like to say that until that foot is officially in the next round.

“I said at the start that this group would be tight because all the teams could take points off each other. That has been proved to be correct.

“We’ve had two good results and another one would be great for us with two games left, but we must understand that even though we are at home now, the quality and the danger from Ajax is as much, if not more, than the game we played away because they are such a good, technical team.

“After losing the opening game against Valencia, which was disappointing, we have shown a great reaction from that.

“I have to accept it’s expected of Chelsea to go through and that is no disrespect to any other teams. I have said already how hard the group is but it is more about our own expectations.

“That is maybe why we had that reaction. We wanted to prove ourselves, we wanted to go to Ajax and Lille and get results, and we did.

“But we won’t get carried away with ourselves in this group.”

Chelsea’s appeal against a two-window transfer ban imposed by FIFA is due to come before the Court of Arbitration for Sport on November 20.

The club were unsuccessful in overturning the decision when they presented their case to FIFA’s appeals committee in April and now CAS will rule on the issue.

Yet the feeling among some Chelsea fans is that they do not need the ban overturning, given the success currently being enjoyed by Lampard’s young side.

The Stamford Bridge boss added: “We’re on a good run, though, aren’t we? You never know.

“That’s a nice feeling. Of course some players have come in and shown with their opportunities they’ve been given that they can have roles and play well. We are getting results at the moment.

“Chelsea will always look to improve in the windows if we can, if we’re allowed to and if the players we might look at are better or we feel are adding to the squad.

“But at the minute I’m very happy with what I’ve got, so I suppose that’s why the fans are as well.”

One of those youngsters, Mason Mount, is relishing the pressure that comes with mixing it with Europe’s elite.

“We know how important it is to get results in the Champions League,” said the 20-year-old midfielder.

“After the first game we were a bit down but we took positives from it. We knew that going away to France and Holland we needed to get results, to be professional, and we did that.

“So hopefully now we can bring that form back to Stamford Bridge.”

Klopp not distracted by City as Liverpool welcome Genk