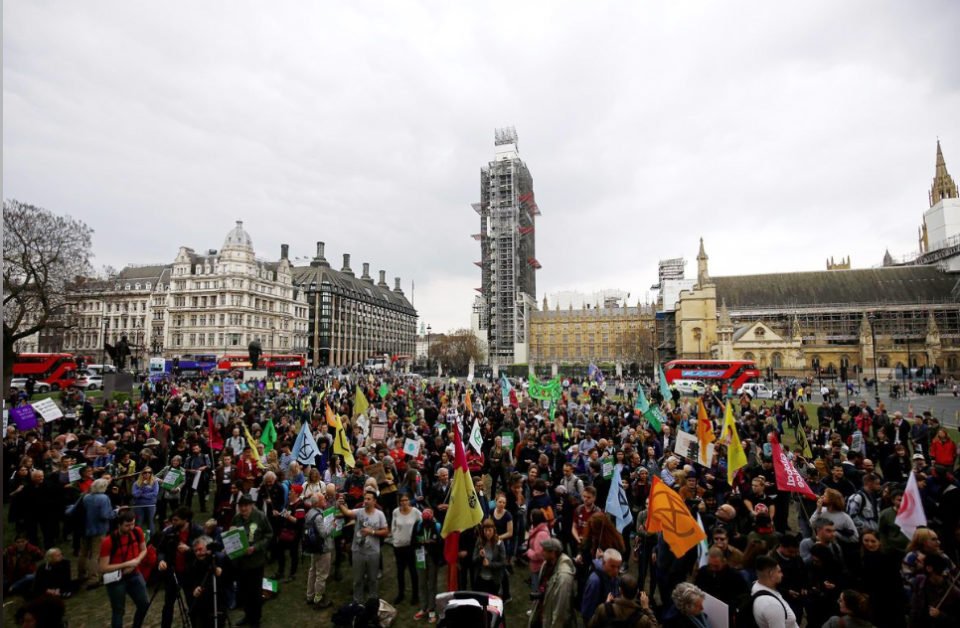 Police overstepped the law in issuing a blanket ban on protests by Extinction Rebellion climate activists in October, London High Court judges ruled on Wednesday, in a decision the group hailed as “an immense victory for the right to protest”.

In their decision, the judges agreed with Extinction Rebellion’s lawyers that police were wrong to use Section 14 of the Public Order Act 1986 to prohibit upcoming protests planned as part of the movement’s two-week “Autumn Uprising”.

The Metropolitan Police Service invoked Section 14 after the first week of protests blocked traffic across the city, including in its main financial district, and targeted firms demonstrators said profited from or funded activities driving climate change.

The police service said it was “disappointed” by Wednesday’s ruling, reiterating that the protests had caused widespread disruption in London and pulled officers away from other duties.

Tobias Garnett, a human rights lawyer working with Extinction Rebellion, said the movement was “delighted” with the judgment on what he called “an unprecedented and unlawful infringement on the right to protest”.

“This was obviously an over-extension of police power,” he told reporters outside the court.

The Metropolitan Police was unlikely to appeal the ruling, he said, as the judges had made it “fairly clear they acted beyond their power”.

The police service said it was still considering whether to appeal.

The decision means the more than 400 Extinction Rebellion protesters arrested after the ban was imposed would now see charges against them dismissed, Garnett said.

The ruling also opens the way for some of them, as individuals, to seek compensation for false imprisonment if they choose, he added.

Ellie Chowns, a Green Party Member of the European Parliament who was among those arrested for gathering in London’s Trafalgar Square following the ban, called the decision “an immense victory for the right to protest”.

The Extinction Rebellion protests “have played such a critical role in making the politicians pay attention” to climate change threats, she said, calling the decision to restrict them “disproportionate and dangerous”.

Section 14 allows police to make arrests “to prevent serious public disorder, serious criminal damage or serious disruption to the life of the community” during a protest.

“The police have powers to impose conditions to manage protests but not to ban them,” Jules Carey, a lawyer acting for Extinction Rebellion, said in a statement.

“This judgment is a timely reminder to those in authority facing a climate of dissent (that) the right to protest is a longstanding fundamental right in a democratic society that should be guarded, not prohibited by overzealous policing,” he added.

Outside the High Court, a small crowd of Extinction Rebellion activists expressed relief at the decision.

“It’s essential we protect the right to peaceful protest. It would be a slippery slope if we let this (ban) stand,” said Caroline Saville, a London resident standing in front of a blue banner reading, “You can’t arrest everyone and remain legitimate”.

Jim Cooper, another activist, said the ruling was a “moral victory” but that a loss in court would not have affected the movement’s plans to carry out more non-violent protests to demand urgent action on climate change threats.

“We will continue no matter what. Our goal is to disrupt, to make people aware of what’s going on,” he said.

Lawyer Garnett said Extinction Rebellion was grateful for Britain’s strong record on human rights and expressed sympathy for climate activists in other nations who were protesting “without these protections to rely on”.

No indication Danish mall shooting was ‘act of terror’ – police