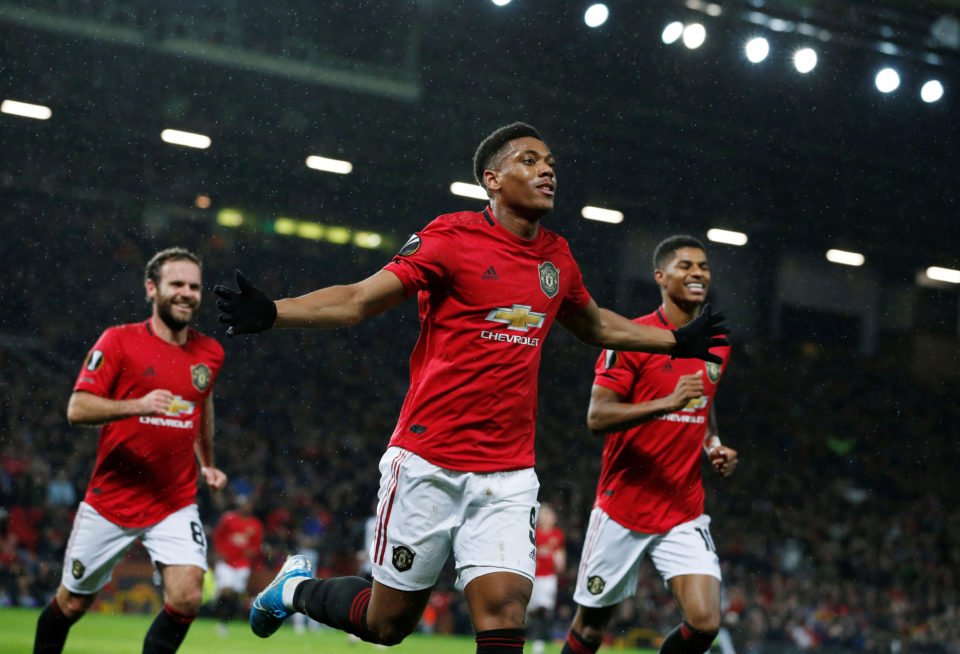 Having seen a three-match winning run come to a disappointing halt at Bournemouth at the weekend, Ole Gunnar Solskjaer’s side rallied and secured a comprehensive Group L victory under the lights at Old Trafford.

Classy goals by Greenwood, Martial and Rashford gave free-flowing United a deserved 3-0 victory on Thursday night, ensuring progress to the Europa League round of 32 with games against Astana and AZ Alkmaar still to play.

Solskjaer can now experiment and rest key players in those fixtures – a boost with the energy-sapping 6,000-mile return trip to freezing Kazakhstan looming large later this month.

A last-gasp Olivier Ntcham goal handed Celtic a ticket to the last 32 stage in the Europa League on Thursday while Munir El Haddadi’s hat-trick ensured Sevilla also go through along with Basle who had Fabian Frei to thank for their winner.

Celtic won 2-1 at Lazio with almost the last kick of the game as Frenchman Ntcham elegantly chipped the ball over the oncoming goalkeeper Thomas Strakosha deep in stoppage time for the Scottish side’s’ first-ever victory on Italian soil.

Munir’s goals for Sevilla were supplemented by two from Munas Dabbur in a 5-2 away drubbing of Luxembourg’s Dudelange as the Spaniards kept up their 100% record in Group A.

They had raced into a 4-0 halftime lead.

Swiss club Basle also reached the knockout phase, with Frei scoring the winner on the hour mark as they beat visiting Getafe 2-1 to go four points clear in Group C.

PSV Eindhoven missed the chance to put poor domestic form behind them and also qualify for the last-32 as they let an early lead slip at LASK Linz and eventually lost 4-1.

A fifth minute penalty from Daniel Schwaab had the Dutch ahead at halftime but the Austrians were rampant after the break with Brazilian import Klauss bagging two late goals.

Sporting top Group D after a 2-0 win at hapless Rosenborg of Norway to move to nine points, two more than LASK and PSV.

A 1-1 draw between Standard Liege and Eintracht Frankfurt in Group F also helped the cause of leaders Arsenal, who conceded a stoppage-time equaliser on Wednesday at Vitoria Guimaraes for the same scoreline in Portugal.

Arsenal can make sure of progress to the knocout stage when they next host the German side on Nov. 28.

AZ Alkmaar, who last month thrashed Astana 6-0 to equal the record victory margin in a Europa League group match, trounced the Kazakh club again with a 5-0 win in Nur-Sultan on Thursday.

Our View: Populist debt-relief scheme Estia is doomed to failure