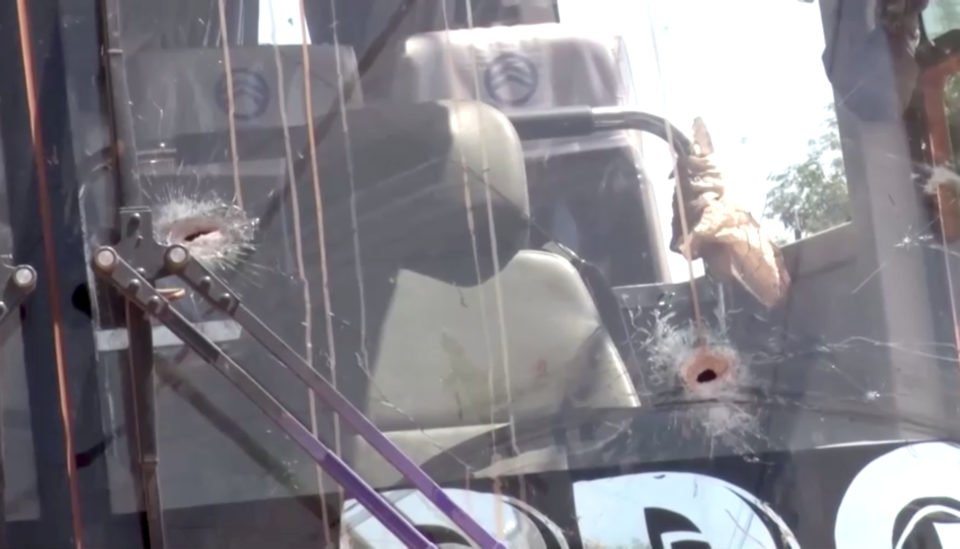 Bullet holes in a bus window are seen after it was attacked near Fada N'gourma, Burkina Faso, in this still image obtained from a video. RTB/REUTERS TV

A mine worker shot during an ambush on a mining convoy in Burkina Faso said on Friday he was one of only three survivors from a bus with up to 80 people aboard, suggesting the death toll may be much higher than officially reported.

A fellow survivor gave a similar account of Wednesday’s militant attack on the convoy of five buses, which Burkinabe authorities said killed 38 people and injured 60.

Abel Kabore, 35, described the attackers, some speaking a foreign language and shouting “Allahu Akbar” – Arabic for “God is great” – raking three buses with bullets after a security vehicle escorting the convoy hit a landmine.

The first two buses were able to escape, he said.

“The three buses which were shot … there were so many dead. It was over 100. We were on the ground. We saw everything,” he said quietly at a hospital in the capital Ouagadougou. Of the people on his bus, “only 3 of us survived.”

He said each bus had been carrying 70-80 people. A security source who works in the sector and a worker at the mine had previously said the convoy was likely carrying around 250 people in all, leaving dozens unaccounted for based on the authorities’ casualty list of 38 dead and 60 wounded.

Neither Canadian gold miner Semafo nor the Burkinabe authorities have confirmed how many people were in the convoy when it was ambushed on a road leading to the company’s Boungou mine in eastern Burkina Faso.

Neither responded to queries on Friday.

Panicked workers tried to flee the buses during the attack, then desperately scrambled back onboard away from gunmen in the bush, said another wounded survivor, Bakary Sanou.

“People were trying to go back into the buses. I tried to run away into the bush, and saw that they (the attackers) went back onto the buses, opened the doors and tried to kill everyone,” said Sanou, an oversize bandage on his right foot. A mobile phone lay charging next to him on rumpled pink sheets.

The bodies of 29 victims were formally identified on Friday, public prosecutor Harouna Yoda said in a statement, adding that their families would be allowed inside the morgue of the Bogodogo District Hospital in Ouagadougou.

Distraught and angry relatives complained earlier on Friday that authorities had not let them view the bodies.

“The government should allow at least one family member to go and identify a body,” one man, Ismail Roamba, told Reuters.

Yoda said the government had opened an investigation into the attack.

It was still unclear who carried out Wednesday’s ambush.

A homegrown, three-year-old insurgency has plunged parts of Burkina Faso into bloodshed, amplified by a spillover of Islamist militant violence and criminality from its chaotic northern neighbour Mali.

In 2016, an Islamist attack on a hotel and restaurant in the capital killed 30 people. A similar assault the next year killed 19 people. In 2018, militants hit the French Embassy and the army headquarters in Ouagadougou, killing 16.

The Boungou mine is located in Burkina Faso’s Eastern region about 355 km (220 miles) from Ouagadougou. Semafo has said the mine site is secured, but it has suspended operations there.

Canada condemned the attack and offered condolences to victims. “Canada remains concerned about the deteriorating security situation in Burkina Faso and deplores the violent attacks carried out on civilians,” its foreign ministry said.

“We will continue to work with Burkina Faso and partners in the region to prevent conflict and fight terrorism.”