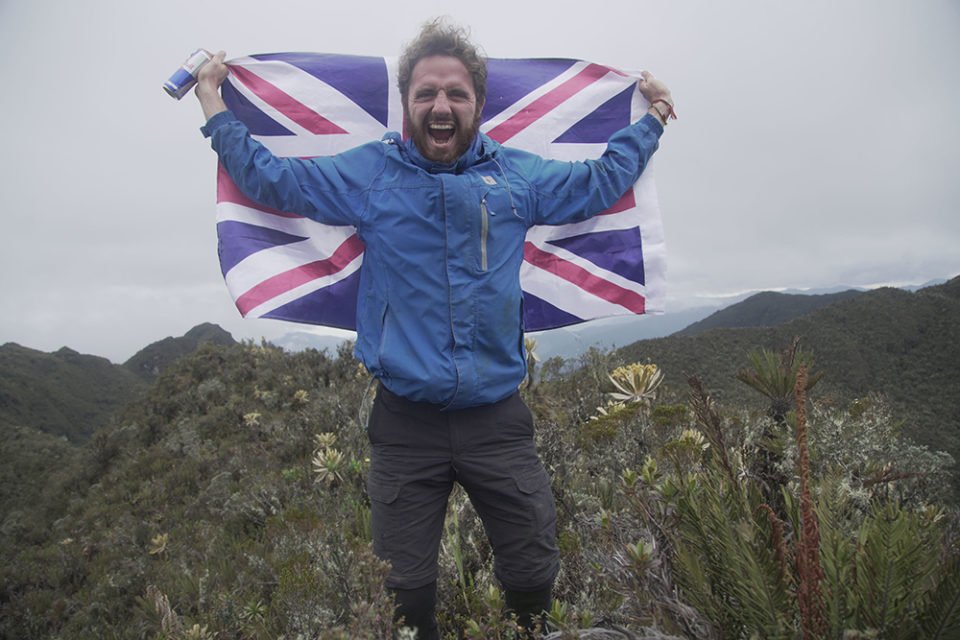 Novice adventurer Thomas Palmer talks to Lauren Taylor about the highs and lows of a trip that changed his life.

Taking on Colombia’s highest peaks would be a considerable feat for most experienced climbers, but Thomas Palmer, a complete novice adventurer, took on mountains and volcanoes up to 5,556 metres during multi-day treks, carrying a 30kg pack, and dodging a few landmines along the way.

What makes it even more impressive is that just prior to arriving in Colombia, he was suffering such a severe bout out depression, that he’d stopped leaving the house.

Starting with Galeras volcano, the 29-year-old attempted eight of the country’s trickiest peaks, like Ritacuba Blanco and Nevado del Huila, summiting five of them, while forced to abandon three close to the top.

We caught up with Palmer on his return…

What was going on prior to the trip?

“I was battling with depression and anxiety, and I was down and out, to be honest. I was at the end of my tether. There was a death of a family member, a breakdown of a relationship, I lost my job, then my house – so kind of the basic, fundamental things that keep you grounded, all fell away. It became really bad – I couldn’t leave the house, I stopped socialising and isolated myself.”

Why attempt the highest peaks in Colombia?

“Last year I worked as a cameraman on Ross Edgley’s Great British Swim, I was still battling behind closed doors, but being in the presence of Ross – the most positive person I’ve ever met – it kind of started to rub off on me. When someone’s taking on that kind of challenge, swimming for 12 hours a day, it helped put things into perspective. I told him I’d always wanted to do an adventure and he spurred me on.

“One day, I thought something needs to change now, because it’s not changing quick enough. I googled Colombia’s mountains. I’d been in the past and loved the country, and the next day I booked a plane [teaming up with Red Bull Media House for the trip]. Before this, I’d only walked a few hills in Wales!”

What did you have to carry with you?

“My pack was 30kg. There was camping equipment, ice boots, helmet, pick axes for climbing ice, ropes, food and water. A lot of the peaks we [him and videographer Timothee Callec, who documented his journey, and a local guide] climbed were volcanoes, so at a certain height, you aren’t going to find any water. You have to endure a certain amount of physical pain or hardship – especially if you’re carrying a 30kg backpack, it’s very hard to walk with a smile!”

What was the biggest challenge?

“Mountain number five, the summit of Nevado del Tolima, was incredibly hard. I suffered bad altitude sickness, so after 3,600 metres, I was struggling. It’s 5,215 metres and I’m not sure I would have made it without the guide and the cameraman. I’m not sure my legs were even working anymore, they were pulling me along on a rope.

“I’d say Tolima was the most beautiful. The glacier was amazing, pure white and rolled on like icing on a cake. We actually had a clear view that day, maybe the only blue sky we ever got.”

Did you get lost at all?

“Ritacuba was sketchy. When we were climbing, a snow blizzard swept in. We got trapped for a few hours on the mountain, surrounded by gaping open cracks, and we lost our sense of direction totally. We ended up going around the mountain and had to double back, to finally reach the peak.”

Any other hairy moments?

“The last volcano, Nevado del Huila, was a different level of physical endurance. It was eight or nine days and no one had walked that route in 25 years because of military conflict, so we had to use a machete to carve a new path through the forest. On the first day, we got lost in the dense jungle, which turned out to be littered with landmines. We were unaware of this until about half a day into it – that was really nerve-wrecking.

“On the second, we didn’t drink water for more than 30 hours. We thought there’d be water but there wasn’t any at all! The effects of dehydration had definitely set in and we finally found salvation from drinking water out of the tops of certain plants! I would wake up at around 4am to lick the dew off my tent! It really was that bad.

“We finally did see the volcano in all her glory, only to be ordered to turn back by the FARC [rebel armed forces]. We kindly obliged to that one.”

What did the adventure do for your mental health?

“When I had the goal and the focus and the support of Red Bull, I just poured everything into it – my body, my mind, everything. I lived the adventure – and I lived in it as well, not living in the past or the future. Every mountain I climbed and every summit I did, I felt like I was just leaning further and further away from the place I was in before.

“Every time I faced a challenge and overcame it, it reinforced the mental toughness. It’s surreal to be back, but I genuinely feel like a different person now – I’m really well.

“Plus, everyone knows it, but putting your phone down and getting out in nature has a massive impact on your mental health, it boosts you straight away. I feel like I’ve found something that makes me tick now – and I’m already thinking about more adventures.”

Australian bushfires wipe out half of koala colony, threaten more

Three dozen rescued after blast in east German potash mine