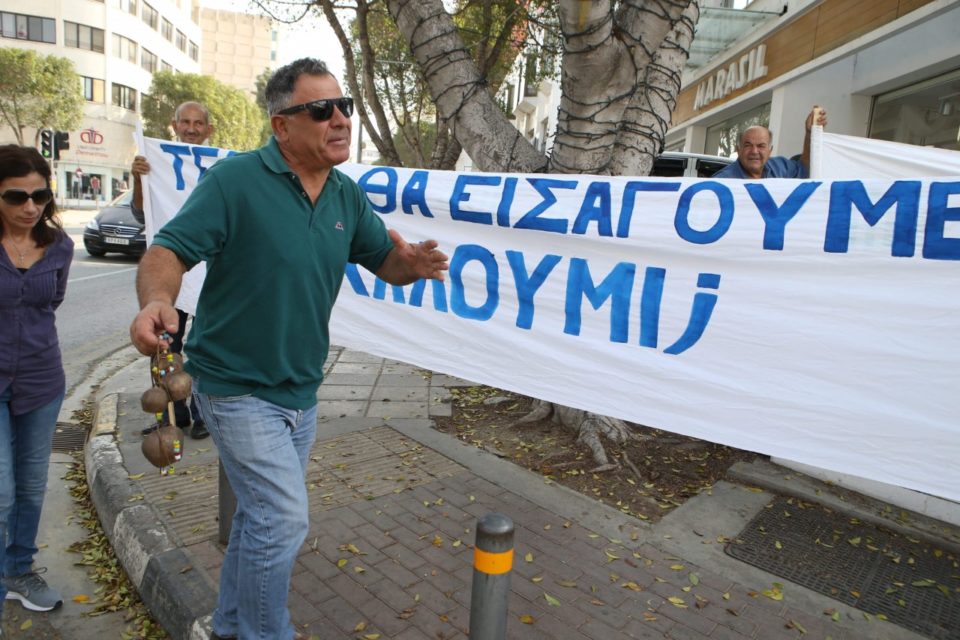 Sheep and goat farmers on Friday demonstrated outside the ministry of commerce to protest over delays in the PDO registration of halloumi.Photo: Christos Theodorides

Sheep and goat farmers on Friday protested outside the ministry of commerce over delays in the registration of halloumi as a Protected Designation of Origin (PDO) product while expressing concerns about whether Cyprus would eventually have to import its traditional cheese.

Representatives of the farmers met Commerce Minister Yiorgos Lakkotrypis and have also requested to meet President Nicos Anastasiades to present their demands.

The protesting farmers demanded the application of the law on the halloumi specifications and a 2014  cabinet decree providing that halloumi must contain at least 20 per cent of sheep and goat milk.

At the same time, they called on the government to immediately complete the procedures for the registration of halloumi as a PDO, arguing that this was the only way to achieve the protection of the traditional cheese product.

The farmers were holding sheep bells and banners saying, “Tolerance has an end, we need to implement the law here and now” and “Will we be importing halloumi in the end?”  They also distributed halloumi made with sheep and goat milk.

Among their grievances was also the practice of the use of powdered milk in halloumi production, something they believe makes a mockery of both local and international consumers.

Cyprus has been battling on two fronts to protect halloumi: in the UK, where it lost the trademark because of blunder by civil servants; and in the EU where its collective community mark is being challenged.

The EU collective wordmark Halloumi, registered on 14 July 2000, remains in force across the EU, including the UK.

Under the collective community mark, halloumi is produced only in Cyprus with certain ingredients and production methods. The UK’s secession deal also provides for the collective wordmark to be applied in the UK after Brexit.

According to the commerce minister, at least one of the problems has been solved.

“We have overcome the danger of losing the community mark as the lawsuits against it have been withdrawn and a settlement has been reached and we have protected it,” Lakkotrypis replied to the farmers.

He announced a meeting at the presidential palace will be arranged as soon as possible, chaired by the president. The environment minister, in the meantime, will meet with the farmers on Monday.

“It is very important for us not only to protect the mark in EU countries but to be able, after the United Kingdom leaves [EU], to convert the community mark to an English mark and thus win it again,” Lakkotrypis stressed.

The minister said that during the meeting with the farmers he explained what the industry is doing in terms of its responsibilities in the field of trademarks and market controls, in particular on milk quotas and milk powder for the sheep and goats.

Concerning the PDO application, he said this was handled by the agriculture ministry and should be solved as soon as possible.

Japanese women fight for right to wear glasses to work