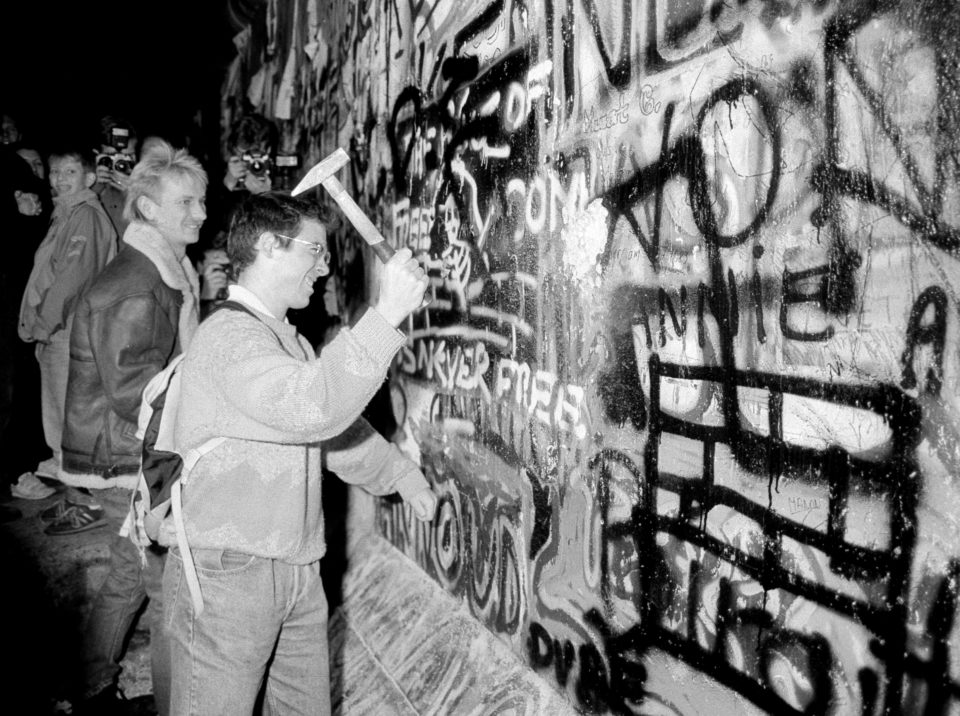 FILE PHOTO: A man hammers a section of the Berlin Wall near the Brandenburg Gate after the opening of the East German border was announced in Berlin, November 9, 1989. REUTERS/Fabrizio Bensch/File Photo

Sascha Moellering witnessed the fall of the Berlin Wall at the Brandenburg Gate on Nov. 9, 1989. But it took about another 10 years for the border between the communist East and capitalist West to come down in his mind.

His mother was watching television at home and saw images of people shaking fences at the border after Guenter Schabowski, a senior East German communist official, accidentally announced the opening of the wall at a news conference.

“At some point my mother looked at me and asked: ‘What are you doing here? Go! This is history! And you have to go’,” Moellering recalled ahead of the 30th anniversary of the event which ultimately led to German reunification.

“There were a few thousand people standing on the wall singing and dancing to Beatles songs, ‘Give peace a chance’, of course, and the mood was really great,” he said.

Pressure had been building on the East German government for months to let its citizens travel freely when Riccardo Ehrman, a journalist at ANSA news agency, asked a clearly underprepared Schabowski about current travel rules.

Stumbling over his words, Schabowski said the East German government had decided to let citizens leave through any of the border crossings – and he believed the new rule would take effect immediately. Dumbfounded and euphoric East Germans rushed to the border to get a glimpse of the West.

“I am not sure that I really contributed but maybe, if I did help it a very, very little bit, I am incredibly proud,” Ehrman told Reuters.

It later turned out that the announcement was not supposed to be made until 4 a.m. the following day. Schabowski had also meant to say East Germans could apply for visas in an orderly manner.

Hans Modrow, the last Communist premier of East Germany, was taken by surprise.

“I was walking when a young man came to me and said ‘Have you heard? The border is open!’ (And I asked) ‘Where does that come from?’ (And he said) ‘Yes, the border is open, should I go?’ And I said: ‘Why would you go?’,” he told Reuters.

Susanne Roebisch, who was from East Berlin but was one of the few who managed to get permission to move to West Berlin with her family in 1985, remembers saying goodbye to everyone she knew as a 14-year-old, never expecting to see them again.

They got a shock when they heard the wall had been breached.

“We all sat there, thinking: ‘What? The wall is open now? Was that a clear statement? Did he say everyone can go from East to West and West to East? What?’,” she said.

Her father, who kept a detailed diary, made a note in the page for Nov. 9, 1989 reading: “The border is open”. The entries for the following days show they received a steady stream of visits from family and friends who lived in the East.

But while the physical wall came down quickly, it has taken much longer for Germans to feel like East and West have really become one country.

A majority of Germans in the former communist East still feel like second-class citizens, even though they are catching up economically with western regions, a government report showed in September.

Helmut Kohl, the chancellor who united Germany, pushed through political union. But factors including outdated economic structures and a way of life imposed on citizens by communist rule, have hampered integration.

Moellering said it took him a long time to see East Berlin as part of Berlin. “The feeling – as a young boy who grew up sheltered in Lichterfelde, on the other side of the town – was that it (the East) was a completely different world.”