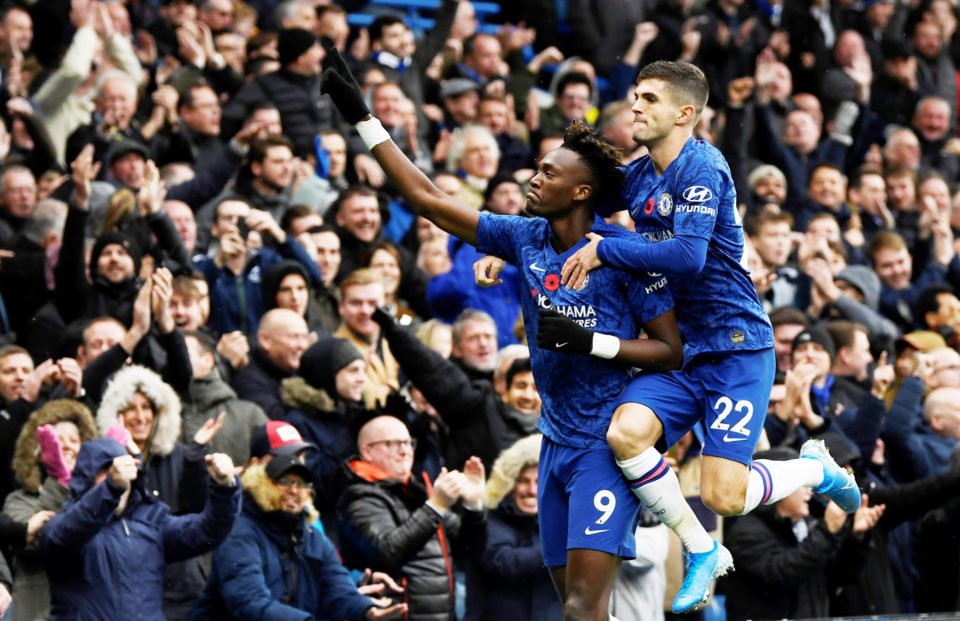 England striker Abraham took his league goal tally for the season to 10 and in-form midfielder Pulisic grabbed his fifth in five games.

After the thrills and spills of the 4-4 midweek Champions League draw with Ajax, this was back to the domestic Saturday job for Frank Lampard’s side.

They endured a frustrating first half against an obdurate, well-drilled Palace, but found a way through after the break.

It meant defeat for Roy Hodgson in his 300th Premier League match as a manager while Lampard, with 288 games less under his belt, saw his side climb – temporarily at least – to second in the table.

Chelsea’s youth revolution continued with Lampard naming their youngest Premier League starting line-up, with an average age of just over 24.

They made a bright and busy start with 19-year-old full-back Reece James, making his first top-flight start, forcing Vicente Guaita to tip a dangerous cross away.

Willian then fed Pulisic, who danced past a sliding Joel Ward in the area only to be foiled by Guaita at his near post.

Palace, without a win in their previous three matches, were living dangerously throughout the first half, inviting Chelsea on but keeping them at bay on the edge of the area.

They gave away plenty of free-kicks around the box but Willian, Emerson and Mason Mount took it in turns to miss the target.

A frustrating opening period for the hosts ended when Pulisic headed N’Golo Kante’s cross over the top, before former Chelsea stalwart Gary Cahill slid in to block Willian’s shot.

However, it took just six minutes after the interval for Abraham to break the deadlock.

Mateo Kovacic was the architect, brushing off a couple of challenges in a congested midfield before finding Willian with a clever reverse pass.

The Brazilian’s neat flick on the edge of the box teed up Abraham, who strode forward and confidently buried his shot past Guaita.

Pulisic, having another fine game, almost grabbed an immediate second with a bullet towards the top corner but Guaita managed to keep it out.

Palace briefly threatened an equaliser but James Tomkins headed wide from a corner.

Instead, Chelsea killed off the visitors with 11 minutes remaining when Pulisic fed Michy Batshuayi in the area, continued his run and got on the end of the striker’s deflected shot.