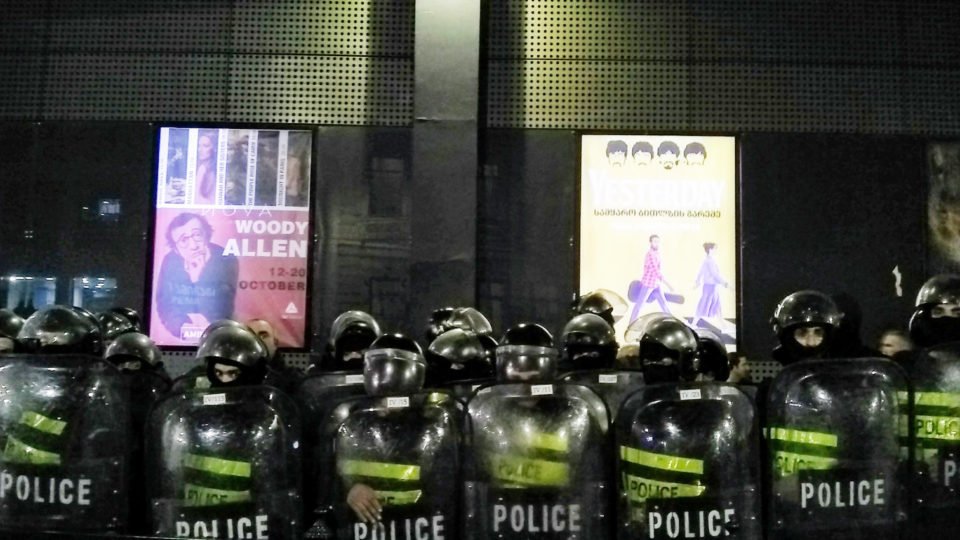 Police in Georgia said on Saturday they had arrested more than 25 people after ultra-nationalist protesters attempting to derail the premiere of an award-winning movie about gay love clashed with security forces.

A few hundred demonstrators blocked the road outside a cinema in the capital’s city centre on Friday ahead of the first screening of “And Then We Danced”, which tells the story of two young male Georgian ballet dancers falling in love.

Chanting “Long live Georgia” and “Shame”, the protesters – some holding crosses and religious icons – tried to force their way inside the cinema but where held back by riot police.

“This is not just a movie. This is an insult to our faith, our traditions and all that is holy for us,” said Guram Damenia, who came dressed in a traditional Georgian costume.

Two police officers and a young woman, who was trying to go watch the film, were injured, police said.

The movie premiered at the Cannes film festival in May and has won awards at festivals around the world.

But reception has been mixed in the conservative Caucasian nation where same-sex relationships remain largely taboo and dance is revered as part of the nation’s heritage.

While tickets for the scheduled three days of screenings at a handful of cinemas in Tbilisi and the port city of Batumi sold out quickly, the influential Orthodox Church denounced the film as an attempt to undermine Christian values and legalise “sin”.

Demonstrators set fire to a rainbow flag and threw firecrackers and smoke bombs at the entrance of Tbilisi’s Amirani cinema, as moviegoers, many young, tried to get inside.

“I don’t think it is normal to have so many policemen here to save me and my friends from people who think that I should not watch a movie,” said 22-year-old Tina Iukhutashvili.

“I should not be scared to go to see a movie”.

Police said they detained 25 people, one for attacking the woman and 24 for hooliganism and disobeying police orders.

Three more were arrested over similar incidents in Batumi and investigations were continuing, the Interior Ministry said in a statement.

“Photo and video materials on the incidents are being processed to identify wrongdoers and provide appropriate legal response,” the ministry said.

About a dozen anti-LGBT+ demonstrators and several priests held prayers outside another Tbilisi cinema.

Georgia has witnessed a cultural clash between liberal forces and religious conservatives over the past decade as it has modernised and introduced radical reforms.

It has passed anti-discrimination laws in an effort to move closer to the European Union but homophobia remains widespread, LGBT+ rights groups have said.

Director Levan Akin, who has described the movie as a “love letter” to Georgia and its traditions, said he felt “so much pride” that no cinema had cancelled the screenings.

“I am so inspired and moved by all the brave moviegoers who stood their ground and would not be intimidated,” the 39-year-old, who was born in Sweden to parents of Georgian descent, posted on social media.

Want to be in the next Cyprus Film Days?