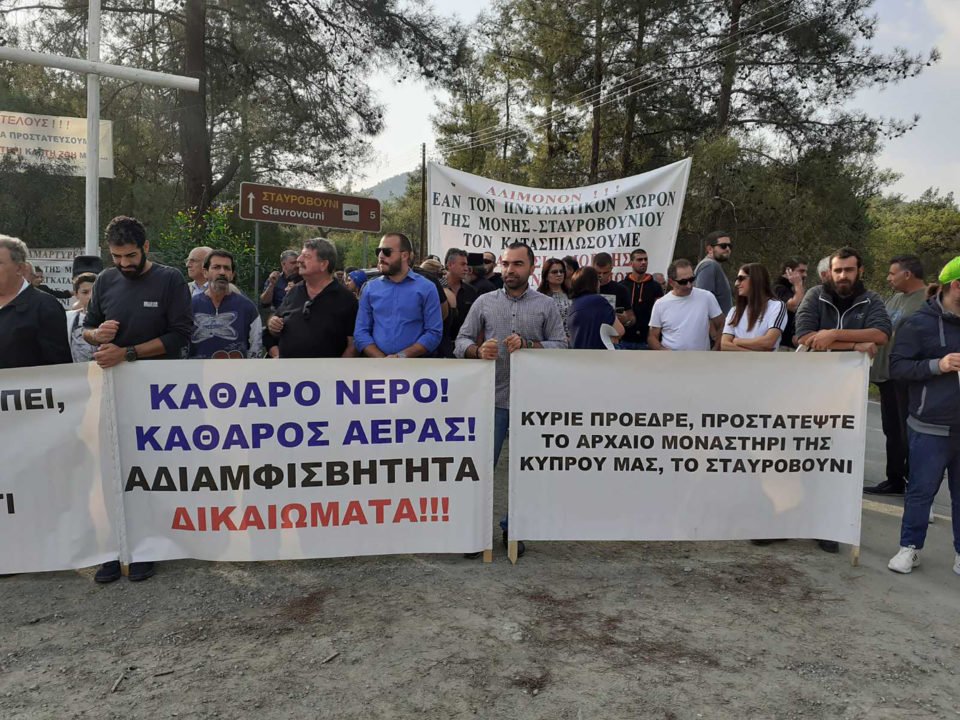 Over 200 people living in the area around Kornos and Pyrga protested on Saturday against the government’s decision to licence an asphalt concrete plant in the area.

The residents, including monks from the nearby Stavrovouni monastery, assembled outside the Skyra Lima premises, blocking access and closing the road leading to the monastery and army barracks located in the area.

The demonstrators shouted slogans like “clean water, clean air, indisputable rights” and “we want to breath clean air” to protest the cabinet’s decision to change the leasing agreement to allow Skyra Lima to set up a plant to produce and recycle asphalt concrete.

Speaking on behalf of the monastery, Gregorios Stavrovouniotis, said they were disappointed by the way the government was handling the matter.

“We believe our area is already burdened and cannot take more,” Stavrovouniotis said. “Our efforts have fallen on deaf ears; we are determined to ensure our basic human rights to health and a healthy environment in any way.”

Stavrovouniotis vowed that the next protests would be more dynamic, and the residents will block any effort to start work on setting up the plant.

He expressed hope the government would think again and consider the issue with “more seriousness and responsibility”.

Akel MEP Giorgos Georgiou accused the government of putting private financial interests above everything else.

“From Yeroskippou to the sea caves, we have reached Stavrovouni, and the same tragic situation is repeated,” he said. “Financial interests are set above the health of the citizens, above the environment, ecology, religion, entertainment and the purity of the environment.”

Earlier this year, the environment department gave the green light for the construction of the asphalt plant reasoning that the project would be constructed in an existing quarry zone, and that under the terms and preconditions that have been set, would have no negative consequences on public health or the environment.

‘Eating in a balanced way can be challenging’