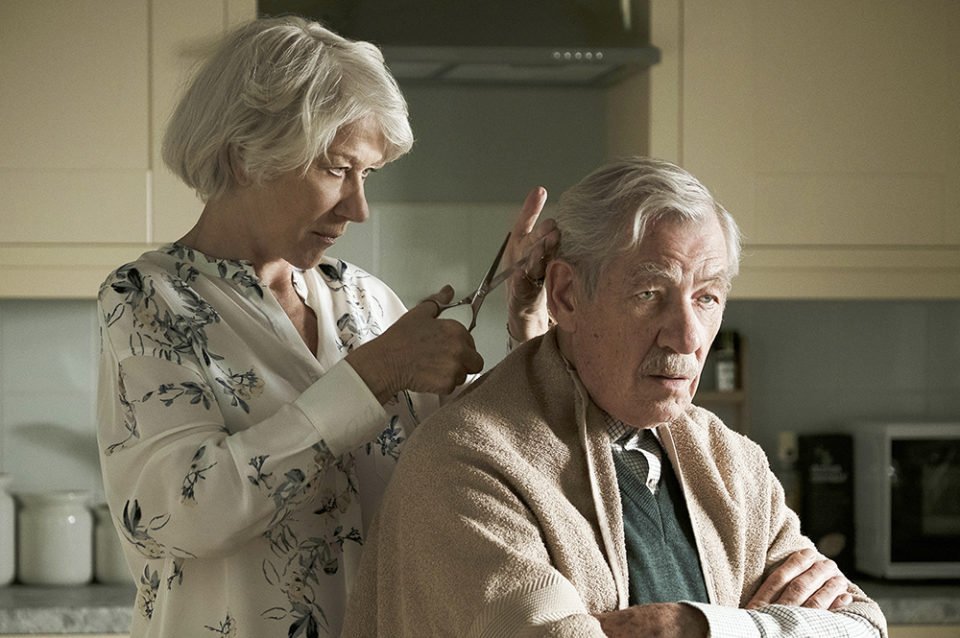 Sir Ian McKellen and Dame Helen Mirren unite for the first time on screen in The Good Liar, in which they play a conman and his mark. The pair sit down with LAURA HARDING to explain what took so long

SIR Ian McKellen and Dame Helen Mirren are seated side by side in comfy-looking armchairs, sipping from delicate china cups and talking animatedly.

You get the feeling that if you walked into the room two hours earlier or two hours later, you would find the exact same scene, as the pair swap gossip and war stories and laugh uproariously.

In fact, they are such good chums it makes it all the more surprising they have not appeared on screen together until now, in the new thriller The Good Liar.

What can possibly have taken so long?

“You often don’t work with people who you long to work with,” Sir Ian, 80, chimes in, “who you know you get on with and act in the same way.

“We both have our background at the Royal Shakespeare Company and then we have both been lucky in movies as well, so you would think it would be natural.”

They are tickled that their union is such an event that posters for the film bear only their surnames, as if they are action stars.

The pair have worked together before, on stage in Strindberg’s Dance Of Death on Broadway, but it is remarkable they have never found themselves on the same film set.

“But here we were very lucky that a brilliant director called Bill Condon (who previously worked with Sir Ian on Gods And Monsters and Mr Holmes) thought it would be good to put us together and we both signed up with alacrity and with great pleasure.

Sir Ian interjects. “And we are neighbours. I often walk Helen’s dog for her, she’s never out of my pub (he owns The Grapes in London’s Limehouse), are you?”

Which brings us neatly on to the subject of their on-screen union, The Good Liar, in which Sir Ian plays consummate con man Roy Courtnay, who sets his sights on the recently widowed Betty McLeish and plans to take her for everything she has.

It’s by no means the first time the actor has played a part with a villainous streak – he’s depicted pretty much every Shakespeare baddie going on stage – but this does mark a change in his on-screen roles, after becoming so beloved for playing Gandalf in the Lord Of The Rings films, and Magneto in X-Men.

“The devil has the best tunes,” he says wickedly.

“And often the best part in the movie is the villain. Why? I don’t know. Maybe an audience is intrigued by what is true and what is not true and at a distance, you can be thrilled by really nasty goings-on, so they are good characters.

“That Roy is a con man is rapidly obvious, but who he actually is, where he comes from and what his motives are, are part of the fun of watching the story unwind. His moustache is real, I’ll tell you that much.

Dame Helen nods. “Even with Jesus, it’s maybe his flaws that might make him interesting, because it is your flaws and your vulnerabilities that make you an interesting character, that is what we are always looking for as actors.”

It’s also conspicuous that this is a film about two people in the, dare we say it, later years of their lives. A story about a relationship between older characters is hard to come by, especially one that does not revolve around death or fatal illness.

“I am 80 and this year I went to a reunion of my form from school.

“There were 30 of us in the form and 10 didn’t turn up, because they were either dead or incapacitated or didn’t want to come.

“The other 20 are hale and hearty, grandchildren of course, retired long ago, full of beans.

“They couldn’t wait for the next party.

“I think that is the norm now for 80-year-olds, as much as people are incapacitated. But young people tend to run the world.”

Dame Helen chimes in: “They don’t realise that life carries on and it does, if you’re lucky and, as Ian says, healthy and active in life.

“Life absolutely carries on in the same ways, with the same passions, the same excitement, the same fun.”

But there is one thing that is a bridge too far for Sir Ian, now he’s old enough to pick and choose what he cares about.

“I did think the other day, as we battle through Brexit, I thought, ‘Oh good God, when I’m long dead they still won’t have the Brexit deal complete’.

“So I think I won’t take a view on it and I’ve withdrawn entirely, emotionally, from the race and am now watching it as a bit of chess.

“All I can say is they are wretched players and don’t know a pawn from a queen.”

The Good Liar is released in Cyprus cinemas on November 21

Passports programme has ‘damaged the country’

Russia releases last of captured whales into the wild