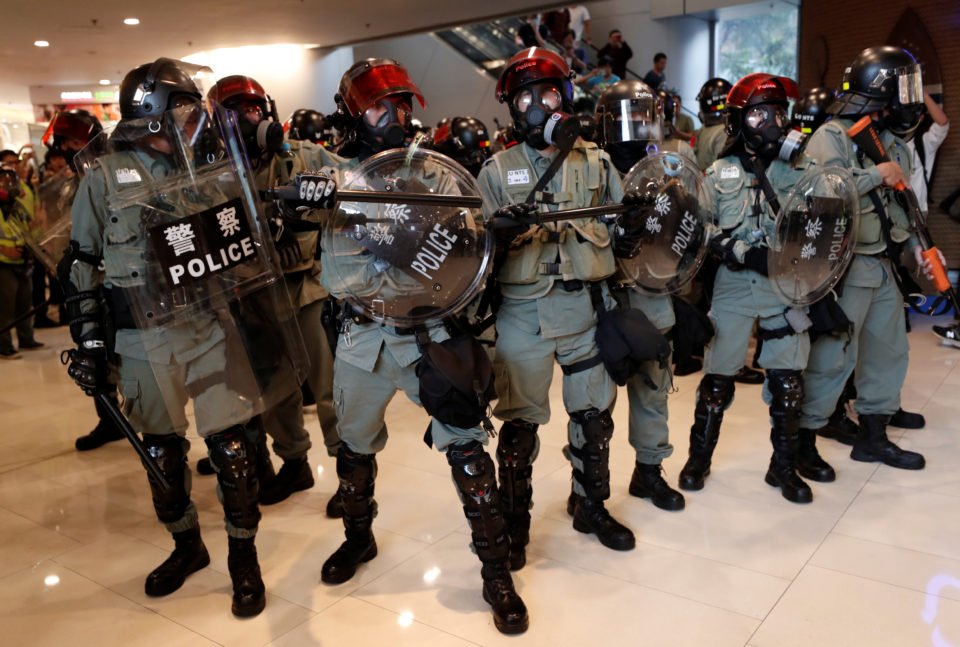 By Jessie Pang and Twinnie Siu

Hong Kong police fired tear gas to break up rallies as black-clad activists blocked roads and trashed shopping malls across the New Territories on Sunday on the 24th straight weekend of anti-government protests.

Pro-democracy protesters vandalised a train station in the central new town of Sha Tin and smashed up a restaurant perceived as being pro-Beijing, overturning banqueting tables and smashing glass panels, two weeks before district council elections in the Chinese-ruled city.

Violence spilled out onto the streets of Tuen Mun outside the “V city” mall, with running battles between riot police and protesters.

Now TV showed pictures of a circular, red welt and bruise on the upper arm of one of its reporters who said she had been hit by a tear gas canister in Tsuen Wan, to the west of the New Territories.

The rail station was closed in Sha Tin, amid scuffles between police and protesters young and old, on a day of planned shopping mall protests throughout the territory. Shopping districts across the harbour on the main island were quiet.

“Radical protesters have been gathering in multiple locations across the territories,” police said in a statement.

“They have been loitering in several malls and vandalising shops and facilities therein, neglecting the safety of members of the public.”

Protesters daubed graffiti and damaged shops at Festival Walk in Kowloon Tong and “stormed” shops in Tsuen Wan, police said. They made several arrests at Festival Walk where fistfights broke out and people hit each other with sticks.

The protesters are angry about what they see as police brutality and meddling by Beijing in the former British colony’s freedoms, guaranteed by the “one country, two systems” formula in place since the territory returned to Chinese rule in 1997.

China denies interfering and has blamed Western countries for stirring up trouble.

Thousands of people gathered on a Saturday night vigil for “martyrs”, after a student died in hospital this week following a high fall during a protest. Many called for revenge.

Seven pro-democracy city lawmakers have been detained or face arrest and are due to appear in court on Monday on charges of obstructing a May meeting of the local assembly, according to police and several of the lawmakers.

“We believe that the government together with the police, as well as the pro-establishment camp, they are trying to escalate the anger of Hong Kong people in order to cancel or even to postpone the upcoming district council election,” Tanya Chan, a pro-democracy lawmaker, told reporters on Saturday.

One of the arrested lawmakers, Gary Fan, said the detentions were the result of “political prosecutions and judicial crackdowns” by Hong Kong chief executive Carrie Lam.

The elections are due on Nov. 24

Protesters have also called for a general strike on Monday and for people to block public transport, although such calls in the past have often come to nothing.

The colony of Hong Kong island and the Kowloon peninsula, acquired after two “opium wars” with China, was expanded to include the much larger, rural New Territories on a 99-year lease in 1898. Britain returned all the land to China when that lease expired in 1997.

A five-member international Independent Expert Panel said that an analysis of the Hong Kong police watchdog, the Independent Police Complaints Council, indicated a shortfall in its powers and “independent investigative capability” to look into policing during the protests.

Geological history of the island a priority says minister