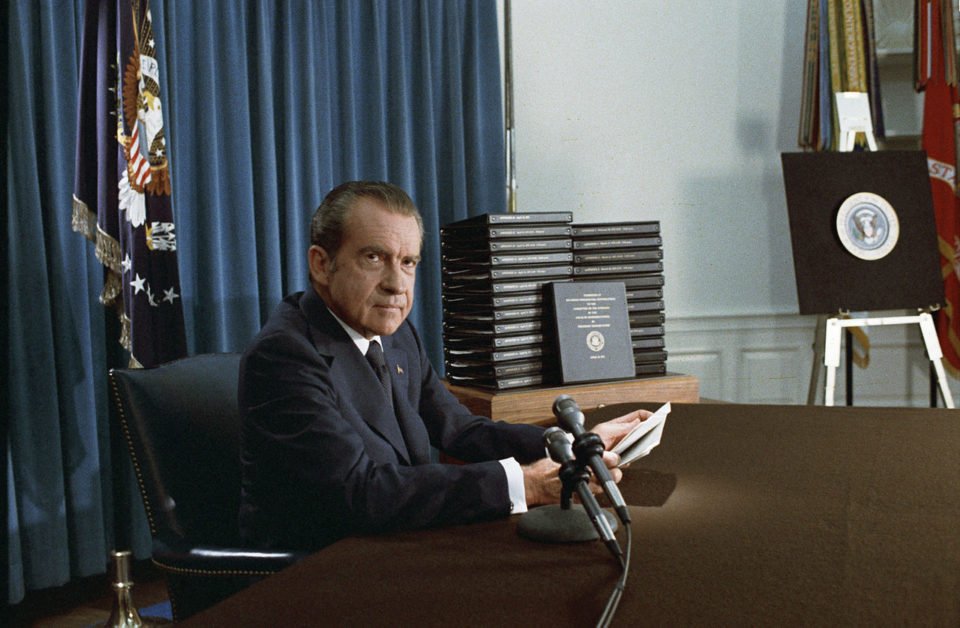 Richard Nixon resigned before he could be impeached in 1974

Only four US presidents have ever faced articles of impeachment

On September 24, speaker of the US House of Representatives Nancy Pelosi announced the initiation of impeachment inquiries over President Trump’s dealings with Ukraine. The story of impeachment dates back to the founding of the United States but when it comes to presidents it has only been seriously considered and invoked three times in the nation’s 250-year history: once in the 19th century and twice in the 20th century. Trump is now the fourth president to face articles of impeachment after Andrew Johnson, Richard Nixon and Bill Clinton.

Following the American Revolution, the young republic entered a phase of turmoil and chaos under the Articles of Confederation – the US’ first governmental system. Afraid of the instability, a group of men known as the Federalists came forward and proposed a new form of constitutional government made up of three separate bodies: the executive, the legislature and the judiciary. The three bodies were vested with their own powers and were to be accountable to each other. Their experiences under the Articles of Confederation made them wary of the oppressive capacities of republican governments, and seeing legislative abuse on a state level, the founders decided to check Congress by first dividing it into two distinct bodies – the House and the Senate—and then vesting the president with a veto over the legislature’s decisions.

However, having recently freed themselves from the shackles of Britain’s constitutional monarchy, others were more afraid of executive overreach, which could turn the newly independent colonies into what they had escaped in 1776, a European-style monarchy. To that end, the founders set in place certain mechanisms that would prevent the executive branch from abusing its powers. Even the most ardent supporters of an energetic government such as James Madison and Alexander Hamilton recognised the need to check executive powers. One of those checks is Article 2, Section 4 of the Constitution which states that: “The President, Vice President and all civil officers of the United States, shall be removed from office on impeachment for, and conviction of treason, bribery, or other crimes and misdemeanours”.

Impeachment is mistakenly compared to a vote of no confidence which can be found in parliamentary democracies such as the UK. The main difference between impeachment and a vote of no confidence is that the latter can be triggered and passed by a simple majority. Impeachment on the other hand, is a much more rigorous and lengthy procedure. It starts at the House which under its investigatory and oversight responsibilities charges its committees with gathering information and evidence. Then with a simple majority the president can be impeached.

But that does not guarantee removal from office, because the case is then taken by the Senate which essentially puts the president on trial and thereafter requires a two-third majority to remove the president from office. Secondly, even if a president is impeached and removed from office, a change of government is not warranted, and the vice-president takes over for the remaining term. Up until now, two presidents have been formally impeached: Andrew Johnson in 1868 and Bill Clinton in 1999 with charges of “high crimes and misdemeanours”. Richard Nixon resigned before he could be impeached in 1974.

Impeachment does not imply removal from office: Andrew Johnson

Part of the National Union ticket which aimed at attracting Union Democrats during the Civil War, Andrew Johnson, a Democrat, became vice-president to a Republican president, Abraham Lincoln. Johnson went on to become the 17th president of the country after the assassination of Lincoln and found himself in charge of the Reconstruction of the postbellum South. After numerous clashes with radical House Republicans for several reasons, including the rights of the freed slaves and the passage of the “Tenure of Office Act”, which prohibited the president from removing public servants without the approval of the Senate, Johnson replaced his Secretary of War Edwin Stanton with Ulysses Grant and then with Lorenzo Thomas without seeking such approval. Although, faced with 11 articles of impeachment, the primary one was Stanton’s illegal removal. President Johnson was acquitted after 35 Senators found him “guilty” while 19 “not guilty” – thus failing to secure the two-thirds majority necessary for removing a president from office. In 1887 the act that led to Johnson’s impeachment was repealed by Congress as unconstitutional.

Resignation instead of impeachment: Richard Nixon

The saga of Richard Nixon was quite rich: burglaries, wiretappings, political harassment and backroom dealings with China and Tito’s Yugoslavia were just a few of the defining characteristics of the 37th president’s time in the White House. Richard Nixon who enjoyed wide popular support tried to fend off the numerous allegations against him until the release of the “Smoking Gun Tape” in August 1974, which revealed the White House’s connection to the burglars that broke into the Democratic National Committee’s (DNC) headquarters in 1972. In the face of certain impeachment from the House and a likely conviction from the Senate, Nixon became the first man ever to resign the American presidency. He was later pardoned by his vice-president and successor Gerald Ford.

Bill Clinton faced legal troubles from the moment he stepped foot in the White House. First a financial scandal against him and the first-lady Hillary Clinton and then a sexual harassment lawsuit by a former employee of the state of Arkansas, Paula Jones. However, Clinton became the second president to be impeached after lying to the entire nation about his affair with a young White House intern, Monica Lewinsky. Clinton initially faced 4 Articles of impeachment including the sexual harassment lawsuit, but only two of those made it through the House. In the end, Clinton was impeached for lying under oath about the nature of his relationship with the young intern and for obstruction of justice when he made Lewinsky commit perjury. President Clinton was then acquitted by the Senate.

The one which has it all: Donald Trump

Attempts to impeach Donald Trump – much like Bill Clinton – began as soon as he assumed the presidency and arguably even before that. His ambiguous stance on white nationalism, the allegations about a possible collusion with Russia during the 2016 presidential campaign, his infamous affair with a pornstar and the refusal to release his tax returns sparked outcries for legal action against him. However, like Nixon before him, he was able up until recently to maintain some degree of public support – although the tide is now turning with more people favouring impeachment than before. It could be argued that the likelihood of impeachment is quite high, assuming that the committees investigating the president manage to come up with damning evidence, but the chances of Trump being removed from office are not equally high. The primary reason is that the Senate, of which a two-third majority is required to remove a president from office, is still dominated by the Republicans (53 out of 100). Of course, Donald Trump might choose the dignified way out and resign, although, that seems equally unlikely given his egocentrism and paranoia

History has taught us that impeachment is a lengthy and uncertain route with dozens of steps in the interim. Firstly, even if a president is impeached, removal from office is far from guaranteed. Secondly, impeachment is as much a political act as it is a legal one, which means that the Democrats would need to persuade a considerable number of Republicans to join them if Trump is to be impeached and subsequently removed from office. Thirdly and most importantly, if these attempts fail, then Donald Trump might emerge from the quagmire stronger than ever, ready to secure his second term in office. Therefore, the Democrats have to make sure that they either do not botch this, or, at least, that they wait until after next year’s elections to conclude their efforts.

Russia releases last of captured whales into the wild

Police hold campaign to crack down on crime