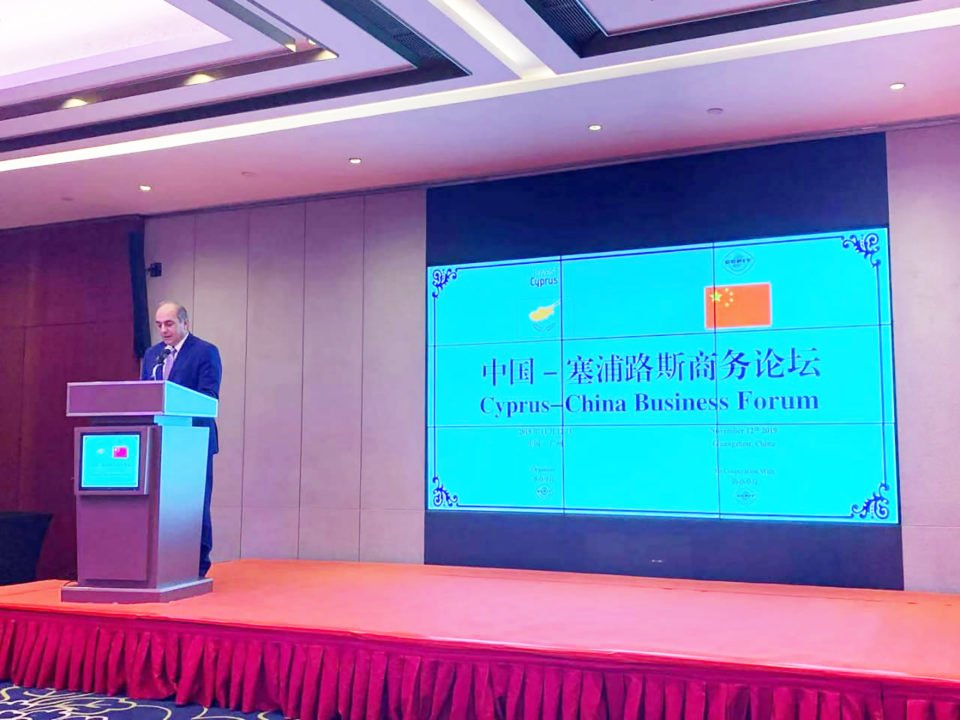 The comparative advantages of Cyprus as an investment and tourist destination as well as a financial, business and maritime hub, the fact it is an EU member its geostrategic were promoted during a China-Cyprus Business Forum in Guangzhou, China.

The forum was organised by the Cyprus Investment Promotion Agency (CIPA)  and the China Council for the Promotion of International Trade (CCPIT), in the presence of House President, Demetris Syllouris, and the delegation accompanying him on his visit to China at the invitation of the National People’s Congress.

The forum was attended by 145 delegates. Addressing participants, Syllouris said Cyprus and China base their historical ties on mutual respect and solidarity, qualities which form the basis for strong business partnerships, that are people-centered and lead to higher mutual benefits.

He said the forum was a very significant event in the efforts for the growth of trade and investment between China and Cyprus and the growth of the two economies in general.
Cyprus was also a supporter of Chinese President Xi’s “One Belt-One Road” initiative.

“It is not a coincidence that the House of Representatives took the initiative to sign a Memorandum of Understanding with the National People’s Congress of the People’s Republic of China last year with a special reference to the Belt and Road initiative and ways the two parliaments can boost economic cooperation in that framework,” he added.

Cyprus considers China a valuable strategic partner, not only in the political but also in the economic sphere, Syllouris said. New investment opportunities and business collaborations were being offered for Cypriot and Chinese entrepreneurs in multiple sectors, including infrastructure, education, and research, innovation, the cultural, maritime, tourism and agricultural sectors.”

Addressing the event, Vice-Chairman of CCPIT Lu Pengqi noted the importance of tourism exchanges between China and Cyprus and expressed the hope that the latter would offer improved visa facilities for Chinese tourists.

He also referred to the potential of promoting Cypriot products as halloumi, olive oil, wine and fruit juices on the Chinese market, while speaking about investments he said that even more Chinese enterprises were now giving attention to the potential of investing in Cyprus in areas such as the maritime sector, infrastructure industry, ports, logistics and transportation.  He also noted that Cyprus was a very important player in the Chinese Belt and Road initiative.

During the Forum CIPA Board member Nicolas Theocharides made a presentation on “Cyprus: A leading and vibrant business centre within the EU”, while Theo Parperis of PwC Cyprus, presented the Cyprus regulatory framework and attractive tax regime and their significant benefits for corporates and individuals.

The Cypriot delegation returns to the island on Wednesday.

Free market policies to blame for plight of pensioners