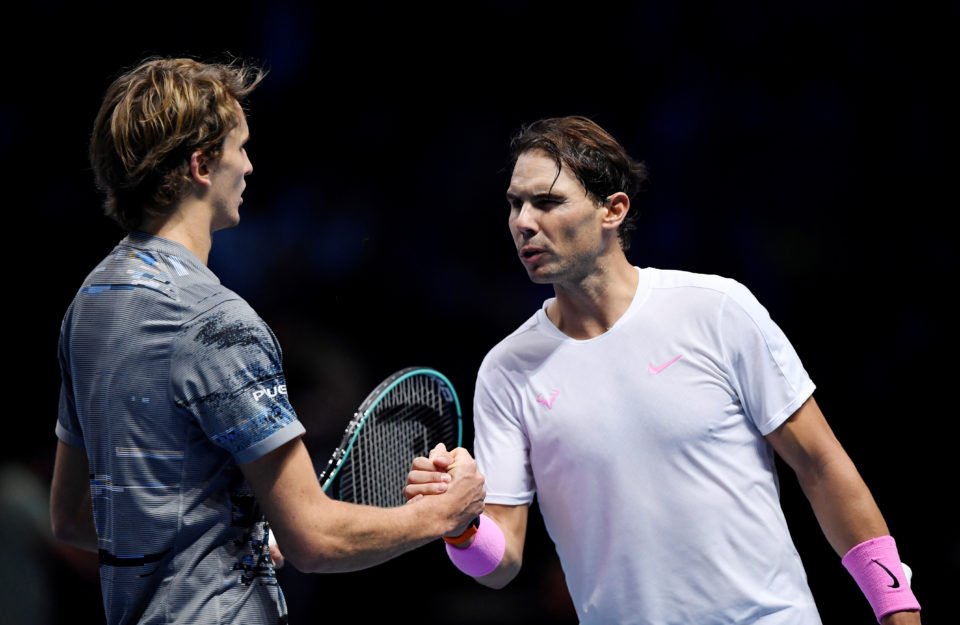 It proved quite a day for ending losing streaks at the ATP Finals on Monday as Alexander Zverev tasted a first victory over Rafael Nadal after Stefanos Tsitsipas got the better of Russian bogeyman Daniil Medvedev.

Both Zverev and Tsitsipas walked out on the huge O2 Arena with 0-5 career records against their opponents but they turned the tables with a couple of dazzling displays.

He might not have won a Grand Slam title yet but after beating Roger Federer and Novak Djokovic in the semi-final and final last year, he opened his defence by outplaying Nadal.

The Spaniard, who took his major haul to 19 this year, has a patchy record at the tournament. He has never won the title, appeared only eight times despite qualifying on 15 occasions and on his last visit, in 2017, withdrew injured.

The world number one refused to blame an abdominal strain picked up this month in Paris for his poor showing.

“It was not a problem with the abdominal at all,” the 33-year-old Nadal, who will face Medvedev in his second round-robin match in a repeat of the U.S. Open final, told reporters.

“I did not feel pain. We can find reasons or excuses, but at the end of the day, all that really matters is I need to play much better in two days.

“I needed my best competitive spirit today, and I was not there in that way.”

Zverev, 22, has salvaged what initially looked like being a poor year with a late-season flourish to qualify for the showpiece and he produced a confident display to dominate.

He took control by breaking in the fifth game and repeated the feat two games later when Nadal blazed a wild forehand wide.

Some scintillating net play earned the German another break at the start of the second set. He stayed rock solid thereafter, not giving Nadal even a sniff of a chance to make a comeback.

“It is obviously great,” said the world number seven. “Everyone knows how much I have struggled the whole season. It means so much to be playing here again where I won my biggest title last season. It means everything to me.”

In terms of Nadal’s hopes of sealing the ATP year-end top ranking for a fifth time, nothing has changed.

He arrived in London with a 640-point lead over Djokovic. With 200 points for each group win, Djokovic cut that deficit on Sunday by thrashing Italian Matteo Berrettini.

Even if Nadal suffered a recurrence of the injury or lost all of his group matches, Djokovic must still reach the final to overtake the Spaniard and match Pete Sampras’s record of finishing a year as number one on six occasions.

Earlier on Monday a large crowd were treated to a high-quality duel between two players seemingly destined to be vying with Zverev for the games biggest prizes.

Tsitsipas gave a swashbuckling display against Medvedev in the first opening round-robin match between two debutants since 2007 and celebrated like he had won the title — a reaction perhaps born out of past friction between the two young guns.

“It means more than extra. It’s a victory that I craved for a long time now,” the 21-year-old Tsitsipas, the first Greek to qualify for the eight-man tournament, told reporters.

“Our chemistry definitely isn’t the best that you can find on the Tour. It just happens with people that it’s not that you can just like everyone.” Tsitsipas plays Zverev on Wednesday.

Five-time champion Djokovic can close the gap further on Nadal on Tuesday when he takes on Austrian Dominic Thiem.