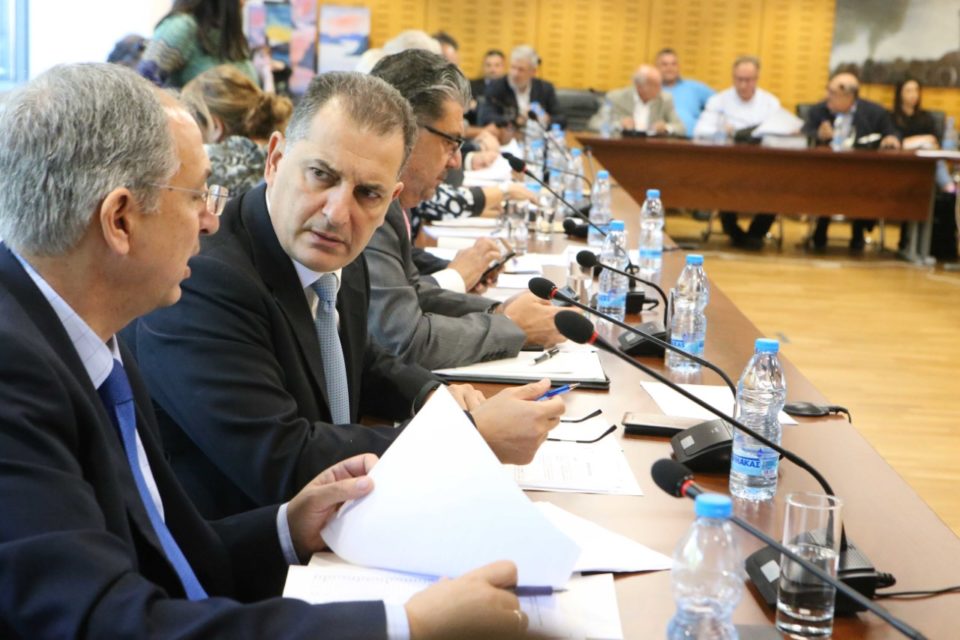 The two ministers in the House on Tuesday (Christos Theodorides)

Agriculture minister Costas Kadis reassured stakeholders on Tuesday the government is doing all it can to safeguard halloumi as a Protected Designation of Origin (PDO) foodstuff.

At the moment, Kadis said in parliament, the government is seeking ‘political solutions’ to the issue which would preserve halloumi’s reputation as a purely Cypriot product.

“These are the principles we are working off, the matter is a difficult one, but our efforts are ongoing,” he told dairy producers and farmers.

Kadis was alluding to the political complexities surrounding the popular cheese’s registration as a PDO due to the inclusion of the Turkish Cypriot version of the foodstuff in the PDO application filed with the European Commission.

Cyprus filed the PDO in application 2014. Normally PDO applications take a few months to be approved. The case of halloumi, however, has presented complications due both to the political situation on the island, as well as infighting over the mode of production among producers in the south.

One dispute, for example, relates to the government’s insistence that halloumi produced in the north must be exported via the ports under the control of the Republic.

At the same time, Kadis stressed that Cyprus will keep fighting for the PDO application process because withdrawing the application would spell disaster for the whole endeavour of registering halloumi as a traditional Cypriot product.

The cheese is a major export for Cyprus. In 2018 exports totalled €194m. This year, up until July, sales to foreign buyers generated €136m.

At present – in what is a transitional period – 80 per cent cow’s milk and 20 per cent sheep and goats’ milk, is required. More than 200 million litres are available, producing 34,000 tonnes of halloumi.

This suggests that under the final specifications, production would shrink by more than 50 per cent and so would annual revenue.

In parliament, president of the Dairy Producers Association Giorgos Petrou warned that half of the cheese factories will shutter should the final PDO specifications be enforced.

Meanwhile, precisely because the designation of halloumi remains in limbo, overseas competitors have moved in to fill the vacuum and the pressure is building.

According to commerce minister Giorgos Lakkotrypis, currently there are 99 court cases ongoing relating to the trademark on halloumi – a separate but related issue.

The latest trademark challenge was mounted by a Bulgarian company which produces the cheese under the name BbqLoumi.

Representatives of farmers groups said that as of this year a French company has been exporting cheese called ‘halloumi’ to Arab countries.

Diko MP Christos Orfanides pointed out that in Cyprus halloumi costs €12 to €13 per kilogram, whereas in Finland it sells for €6.

Rare portrait of teenage Mozart to be auctioned in Paris