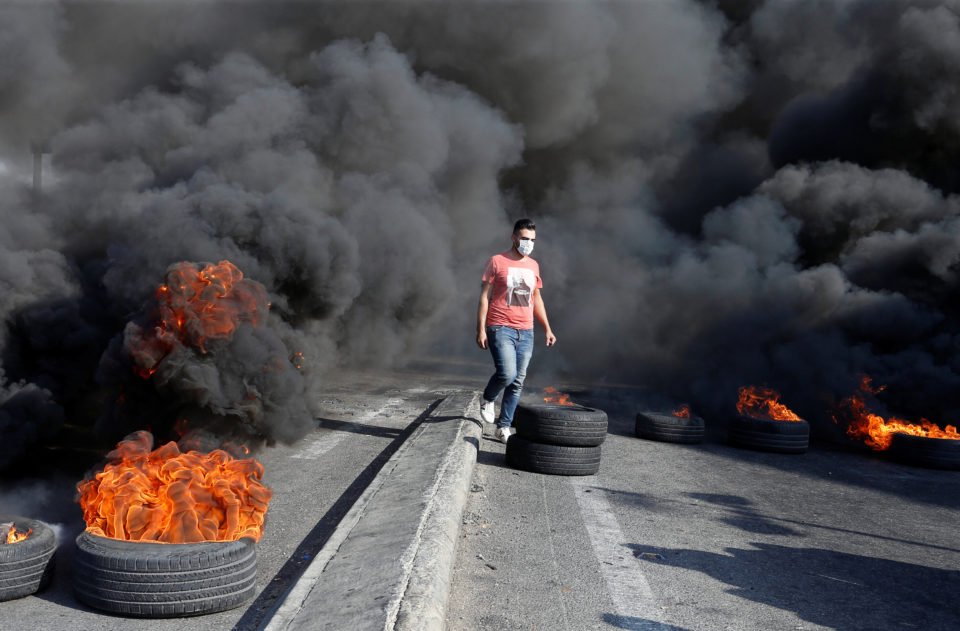 A new wave of protests paralysed Lebanon on Wednesday after President Michel Aoun enraged demonstrators by urging them to end their revolt against corruption and cronyism in the political establishment.

One month after the eruption of nationwide protests, Lebanon is in deep political and economic crisis with no sign of its leaders agreeing on a new government to replace the outgoing cabinet of Saad al-Hariri, who quit as premier on October 29.

Banks, which were shut for half of October, closed again this week over staff security concerns. Most transfers out of the country have been blocked and, with US dollars scarce, the pegged Lebanese pound is weakening on a black market.

Though the protests have been overwhelmingly peaceful, tensions have surfaced since Tuesday evening when Aoun gave a televised interview in which he said Lebanon faced “catastrophe” if the revolt did not stop.

After he spoke, protesters took to the streets across Lebanon and one was shot and killed after an altercation with Lebanese soldiers at a roadblock south of Beirut.

The man was a follower of Walid Jumblatt, a veteran Druze politician and former civil war militia leader, who has urged his supporters to remain calm.

Fights broke out on Wednesday in the predominantly Christian area of Jal al-Dib near Beirut, where protesters faced off with other people including Aoun supporters angered by roadblocks, footage broadcast by the LBC television channel showed.

An armed man in a car drove past protesters in Jal al-Dib waving a gun and fired into the air, the National News Agency said. It said protesters took away his weapon and hit his car.

Aoun’s interview included remarks that angered protesters, including a comment widely understood to mean he was telling them to emigrate if they didn’t like how the country was run.

A 33-year-old protester, Linda Boulos Mikari, blocking a road in Beirut’s Nahr al-Kalb area, said Aoun had talked to the protesters as if they were children. “Respect us a little,” she said. “Respect this people sleeping in the streets for a month.”

“The reaction (to Aoun) was very spontaneous. People felt we have to ramp up the pressure … We will not stop,” said Joelle Petrakian, protesting at a blocked highway in central Beirut.

Despite the depth of the economic crisis, the worst since the 1975-90 civil war, leaders have not been able to agree a new cabinet. Lebanon‘s dollar bonds slumped further on Wednesday.

But Hariri, who is aligned with Gulf Arab states and the West, has said he will only return as prime minister if he is able to form a cabinet of specialists capable of salvaging the situation and able to attract international support.

“We accept this government should reflect a political balance in the country, but through specialists, not the traditional candidates of politicians that usually come into the government,” a source close to Hariri said.

In his interview, Aoun said Hariri was hesitant about being prime minister again. He also said a purely technocratic government, as demanded by many protesters, could not govern and so should include politicians.

Hezbollah and Amal believe Hariri aims mainly to keep Hezbollah out of government, a source familiar with the two groups’ view said on Sunday. Hezbollah is classified as a terrorist group by the United States.

DOLLARS “UNDER THE PILLOW”

Aoun said on Twitter economic conditions were deteriorating, although the start of oil and gas exploration – expected soon — would help improve things gradually.

The Lebanese pound weakened further on the black market. Dollars were being offered at 1,850 pounds compared to 1,820 on Tuesday, an exchange dealer said, around 23 per cent weaker than the official rate of 1,507.5 pounds. The weakening pound has led some shops to hike prices of imported goods in Lebanese pounds.

To avoid capital flight, commercial banks have imposed tight curbs on financial transfers abroad and US dollar withdrawals. The authorities have not however announced capital controls.

Banks, which shut for half of October during the protests, closed on Tuesday and Wednesday in strike action by employees concerned about security risks posed by depositors demanding their money and protesters. The union of bank employees said the strike would continue on Thursday.

Aoun called on Lebanese not to rush to the banks, saying their money was safe. He also said Lebanese were keeping dollars “under the pillow”, referring to money kept at home.

The main road in Khalde, the scene of Tuesday’s shooting, was blocked with burning tyres lain by mourners.

“He is Lebanon‘s martyr … his blood is the responsibility of everyone occupying a post from the president on down,” said a demonstrator. “Today, here, it is civil disobedience.”