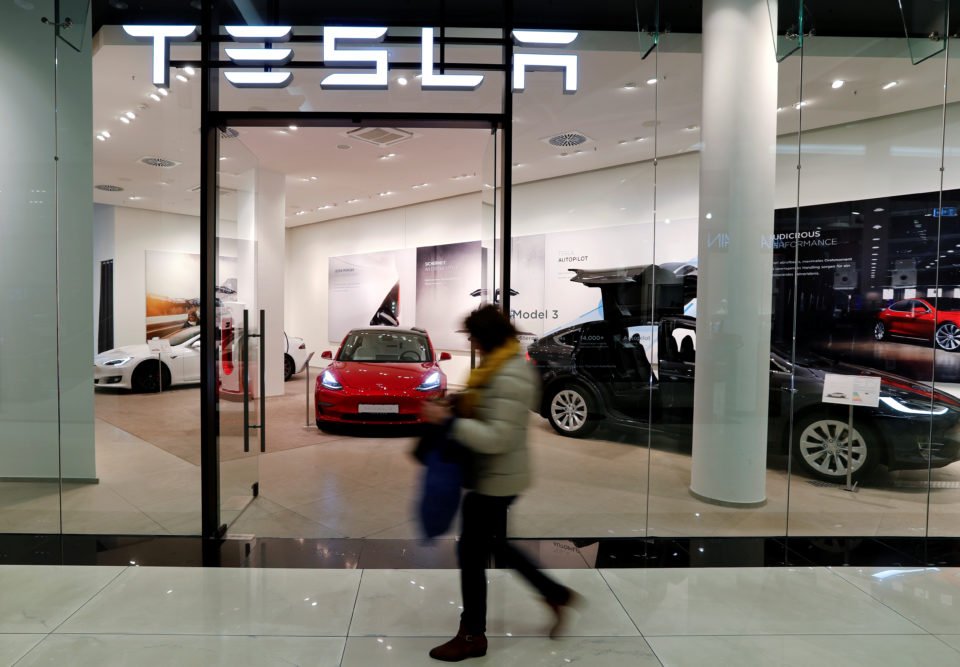 A flagstore shop of electric carmaker Tesla is pictured in Berlin

Tesla will build its first European factory and design centre near Berlin, giving the US electric car pioneer the coveted ‘Made in Germany’ label just as local rivals Audi, BMW and Mercedes prepare to launch competing cars.

“Everyone knows German engineering is outstanding for sure. You know that is part of the reason why we are locating Gigafactory Europe in Germany,” Musk said at the ceremony in Berlin.

Britain missed its chance to host the factory because of Brexit, Musk said in remarks reported on Wednesday.

“Brexit made it too risky to put a Gigafactory in the UK,” he told industry website Auto Express.

The plan is a big boost for Germany as a centre for manufacturing after BMW and Mercedes in recent years chose to build new factories in Hungary, and after its auto industry was hit hard by Volkswagen’s admission in 2015 that it cheated US diesel emissions tests.

Germany’s powerful manufacturing industry has been slowing, with data on Thursday set to show whether Europe’s biggest economy has slipped into recession for the first time since 2013.

Tesla is struggling to ramp up production and has yet to prove it can be consistently profitable as rivals including Audi-owner Volkswagen retool plants to mass produce electric cars.

Musk said the factory would be near Berlin’s new Brandenburg international airport, diversifying the Silicon Valley firm’s production beyond the United States at a time when global trade tariffs make exports more difficult. Besides Europe, Tesla is opening a factory in Shanghai.

Tesla‘s proposed factory will be within commuting distance of Poland, where labour costs are cheaper, a rival manufacturer – who also looked at the site – told Reuters.

“Tesla‘s decision to build an ultra-modern factory for electric cars in Germany is further proof of the appeal of Germany as an automotive hub,” Economy Minister Peter Altmaier said on Wednesday.

“We think we now have the chance, in the coming years, to become an important international centre in this future-oriented sector,” he said.

Dietmar Woidke, the premier of the Brandenburg state that surrounds Berlin, said any official support given to Tesla would be in accordance with European Union rules.

Altmaier said there had been no discussion so far about any subsidies for Tesla‘s plans, adding the company would be treated like all other carmakers.

Even Germany’s auto industry association, VDA, welcomed the arrival of a U.S. competitor.

“Elon Musk’s announcement shows how important Germany is as a location for producing electric vehicles in Europe,” VDA said. “We don’t shy away from competition, quite the opposite.”

German carmakers and suppliers are preparing to build more than 150 electrified vehicles by 2023, VDA said.

While Germany’s renowned car industry is mainly based in the south of the country, the capital has become a hub for start-ups and has attracted many creative and technology firms since the fall of the Berlin Wall three decades ago.

“Tesla is coming to Brandenburg with a big investment,” said state premier Woidke, without giving details “We lobbied for this for a long time in intensive talks and with good arguments.”

Berlin’s minister in charge of economic affairs, Ramona Pop, told public broadcaster RBB there had been talks about creating 6,000 to 7,000 jobs in production alone, with hundreds or even thousands more in areas such as design, software and research.

Musk’s appearance at the awards ceremony is another example of Tesla‘s efforts to give its cars the German stamp of quality.

It already has an engineering firm in Pruem that specializes in automated manufacturing systems for battery factories and has tested its cars on the Nordschleife, the notorious northern loop of the Nuerburgring racing track.