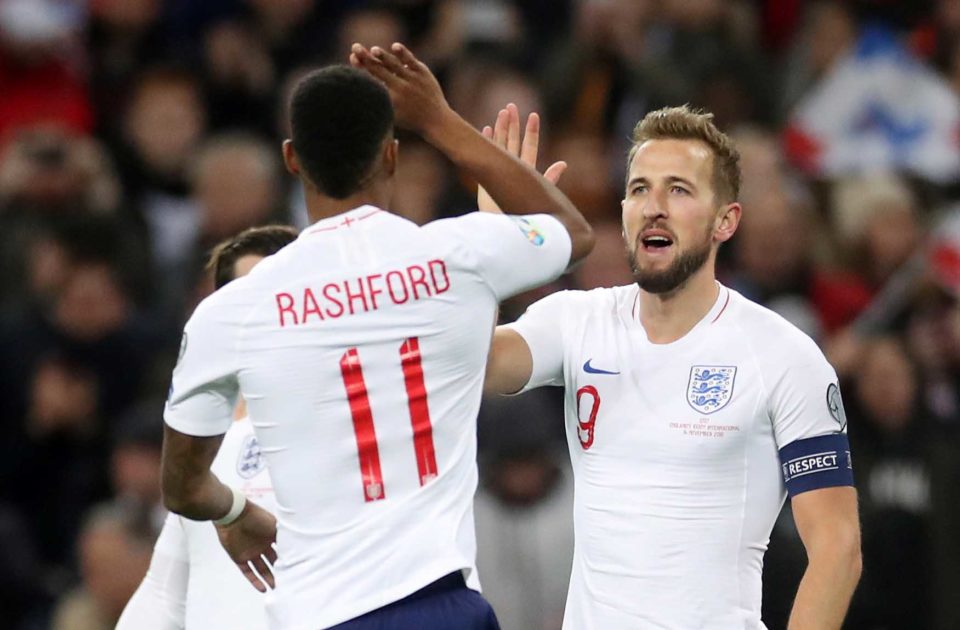 Former captains and Three Lions greats were among those in attendance on a landmark occasion at Wembley, where onlookers were not only able to celebrate 147 years of history but enjoy another glimpse at an exciting future.

Southgate’s men sealed progress to the Euro 2020 finals with a match to spare as a rampant first-half display set up a 7-0 win against hapless Montenegro, with Kane’s treble doing the damage in front of Sir Geoff Hurst, a man who knows a thing or two about hat-tricks.

Securing automatic qualification for next summer’s tournament means all of the Three Lions’ group games will be staged at Wembley, where Southgate’s men will believe they can then return for the semis and final.

Southgate is under no illusions about the work still required ahead of the European Championship, but their fierce performance before the break underlined England’s attacking talent in front of greats such as Paul Gascoigne, Peter Shilton and Wayne Rooney.

The threat on the latter’s all-time scoring record of 53 increased against Montenegro as Kane netted a first-half treble that complemented efforts by Alex Oxlade-Chamberlain and Marcus Rashford.

Kane scored two headers and swivelled to fire home a third to takes his tally to 31 goals, seeing him usurp Frank Lampard, Alan Shearer, Nat Lofthouse and Tom Finney in the standings.

Aleksandar Sofranac’s own goal and substitute Tammy Abraham’s first for his country were the only efforts in the second period of a comprehensive win secured with star Raheem Sterling watching from the stands following his high-profile skirmish with team-mate Joe Gomez.

Boos aimed at the latter when he was brought on as a second-half substitute were arguably the only negative on a night when Southgate named England’s youngest line-up since 1959 – a side that needed just 11 minutes to open the scoring.

Oxlade-Chamberlain wasted little time making an impression on his first start since March 2018, collecting a fine ball from in-form Ben Chilwell and fizzing a low effort past Milan Mijatovic.

It was the start of a long evening for Montenegro’s goalkeeper.

Kane saw penalty claims for handball denied before Mason Mount and Rashford were thwarted by Mijatovic, who can only do so much with his defence unable to deal with set-pieces.

England’s second goal came from a free-kick in the 19th minute, with Chilwell sending over a cross on the end of which Kane showed good strength to glance home under pressure.

Five minutes later and Southgate’s men netted from a corner. Returning to the ‘love train’ system that worked so well at last year’s World Cup, Kane peeled off and was all too easily able to head home Chilwell’s corner.

Montenegro were reeling but would have pulled one back was it not for Jordan Pickford’s outstanding stop denying Marko Simic. The England goalkeeper also stood firm late in the first half, but the visitors were dealing with a five-goal deficit by then.

England grabbed their fourth on the half-hour mark, with a quickly taken corner leading to a close-range Harry Maguire header being saved before Rashford struck home.

The pain did not end there for the visitors.

Marko Vesovic got away with a booking despite headbutting Rashford, but there was no escaping further humiliation as Kane steered home to complete his hat-trick after controlling Trent Alexander-Arnold’s deflected cross in the 37th minute.

A narrow offside call denied Mount his first international goal, with Kane then replaced by Abraham came at the same time as James Maddison came on for his debut.

England fans celebrated the sixth of the evening in the 66th minute when Sofranac turned into his own goal after Rashford forced a save and penalty-box melee, but the match petered out.

It was unusual to hear some fans boo Gomez upon his introduction, with the hosts squeezing out more goal six minutes from time as Sancho crossed for Abraham to net his first for England.

Djokovic’s hopes crushed as Federer serves up a masterclass