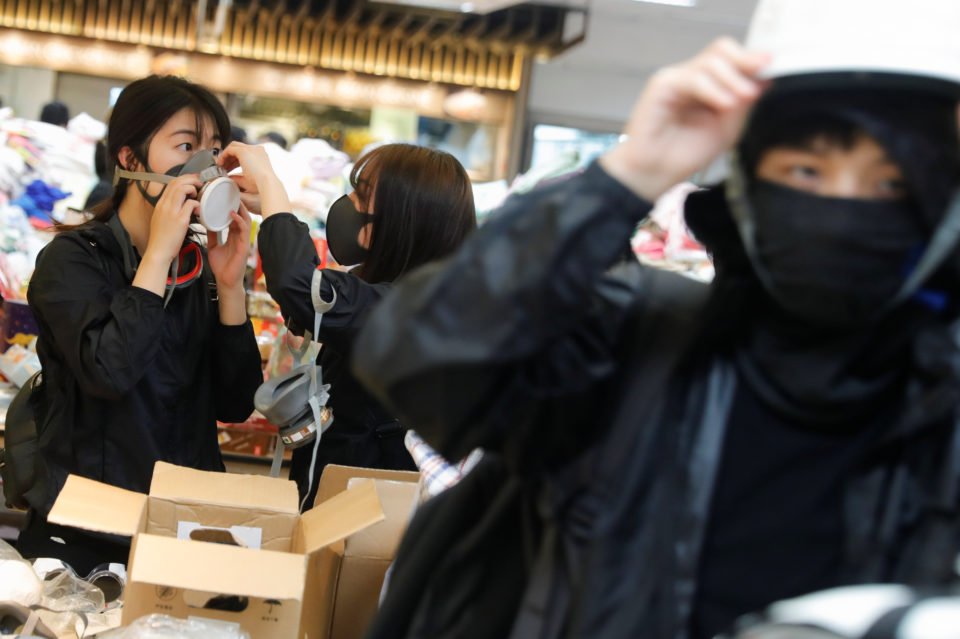 China’s Global Times tabloid, owned by the state-run People’s Daily, the mouthpiece of the Communist Party, said on Twitter that the Hong Kong government was expected to announce a weekend curfew after some of the worst violence in decades in the Chinese-ruled city.

It deleted the post after a short time. Its editor said there was “not sufficient” information to back it up.

Thousands of students hunkered down on several campuses, surrounded by piles of food, bricks, petrol bombs, arrows with heads wrapped in cladding, catapults and other homemade weapons.

Police said the Chinese University, in the New Territories, had become a “weapons factory and an arsenal” with bows and arrows and catapults.

“Their acts are another step closer to terrorism,” Chief Superintendent (Public Relations) Tse Chun-chung told a briefing, referring to protests on all campuses.

He also said police would temporarily avoid directly clashing with “high-spirited rioters” to give themselves a breather and avoid injuries.

Protesters have torched vehicles and buildings, hurled petrol bombs at police stations and trains, dropped debris from bridges on to traffic below and vandalised shopping malls and campuses, raising questions about how and when more than five months of unrest can be brought to an end.

Police said arrows were fired at officers from Hong Kong Polytechnic University in the morning.

Several universities announced there would be no classes on campuses for the rest of the year.

Baptist University, next to a People’s Liberation Army base in Kowloon Tong, issued an “urgent appeal”, telling students to stay away from campus.

“Your safety is so dear to our hearts and to your parents’ and friends’ hearts,” it said. “Please stay away from harm’s way.”

The Global Times’ short-lived announcement about a curfew cited unnamed sources. It did not elaborate but, but online rumours about a curfew have swirled.

The elections are due on Nov. 24

Hundreds of protesters occupied roads in the city’s business district, home to some of the world’s most expensive real estate, in the middle of the day.

Across the harbour, black-clad protesters and students maintained their blockades of major roads, including the entrance to the Cross-Harbour Tunnel that links Hong Kong island to the Kowloon area, and a highway between Kowloon and the rural New Territories.

Police fired tear gas near the tunnel early on Thursday to try to clear the protesters. Roads were strewn with bricks and other debris, causing widespread traffic jams.

At the Polytechnic University, near the Kowloon entrance of the Cross Harbour tunnel, hundreds of students wearing gas masks readied for confrontation.

Boxes of petrol bombs were placed at vantage points overlooking roads, including the tunnel, which has been blocked since Wednesday evening.

Students also poured cooking oil on the ground in an attempt to thwart police should they try to enter.

Violence has escalated in recent days, with police shooting and wounding one protester at close range and one man described as a “rioter” dousing a man with petrol before setting him on fire.

There was also a tense standoff between chanting protesters and police in the New Territories town of Sheung Shui.

The demonstrations were initially spurred by what many residents see as the stifling by Beijing of freedoms guaranteed under the “one country, two systems” formula put in place when the former British colony returned to Chinese rule in 1997.

Anger grew over perceived police brutality as the protests intensified. Police deny being heavy handed and say they have shown restraint in the face of potentially deadly attacks.

Police said they would appoint 100 Correctional Services Department staff, who look after prisons, to reinforce the streets.

“I cannot see how adding 100 special police will help much,” democratic lawmaker Tanya Chan told Reuters. “I don’t know why the government doesn’t adopt measures that can soften the tension rather than intensify conflict.”

China denies interfering in Hong Kong and has blamed Western countries, including Britain and the United States, for stirring up trouble.