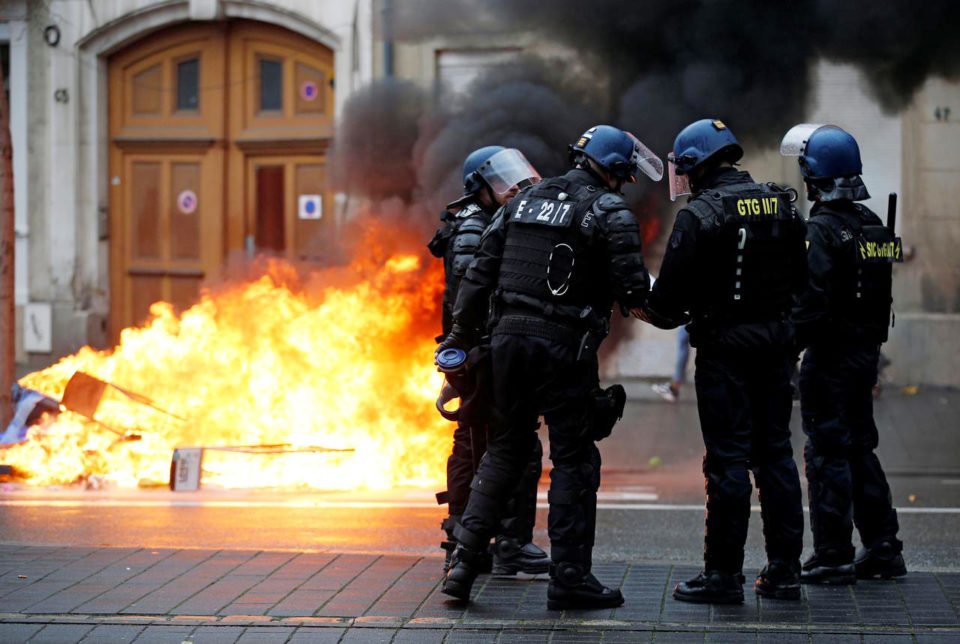 While the French economy is forecast to grow faster than the eurozone average next year, the poverty rate is creeping higher and the president faces another turbulent winter

Agostinho Barreto has stowed away his neon yellow vest and stopped occupying road junctions in protest against the burden of high French taxes. But the garage owner still seethes with anger at the mention of President Emmanuel Macron.

Fed up with of punishing living costs and the squeeze on his finances, Barreto a year ago joined strangers on a roundabout near Fontainebleau in a nationwide campaign against diesel tax hikes. The protests across France swiftly morphed into a broader revolt against Macron.

The 41-year-old president needed more than six months and 15 billion euros worth of tax cuts and other fiscal incentives to quell the uprising. Yet trade union-led calls for mass strikes in December against Macron’s pension reform plan underline the president’s precarious footing as discontent simmers.

Barreto, who retires next month, said Macron had smothered one fire, but the struggle of France’s middle class and working poor persisted. He lamented how the “Gilets Jaunes”, or “Yellow Vests”, became riven by competing interests and said he might resume his protest if the movement found renewed focus.

“The glowing embers need only a small puff of wind to catch alight once more,” Barreto said at his garage in Fontainebleau, a commuter town 70 km (45 miles) south of Paris.

The “yellow vest” backlash to Macron’s reforms to liberalise the French economy was an amorphous movement that spread via social media, unlike previous French popular revolts that were directed by trade unions or student bodies.

For months, tear gas clouded the boulevards of Paris most Saturdays as protesters skirmished with riot police, whose heavy-handed response drew condemnation from rights groups. In some of the worst rioting in Paris in decades, luxury boutiques were smashed up, national monuments defaced and cars set ablaze.

While the “yellow vest” movement has lost momentum and weekly protests draw just a few thousand in towns and cities across France, Macron says he is aware the anger is deep-rooted.

Shaken by their challenge to his authority and forced into policy concessions, Macron has promised to show more “compassion” and government officials say he is treading with caution over pension reform.

“The gilet jaune crisis was in a certain way very good for me. Because it reminded me who I should be,” Macron told Time magazine in September.

A survey by pollster Odoxa published two weeks ago showed nearly one in every two French people believed the “yellow vest” movement might reawaken.

Now, midway through Macron’s presidency, there are signs his reforms are having an impact: job creation is strong, companies are hiring more workers on long-term contracts and unemployment is trending downwards.

“You can’t expect the state to provide everything,” said one former “yellow vest” who was unemployed when the revolt erupted but is now a salesman and asked not to be named. “Everyone wants a good salary, a nice house, holidays, but that is dreamland. At a certain point you have to look after yourself.”

While the French economy is forecast to grow faster than the eurozone average next year, the poverty rate is creeping higher and the president faces another turbulent winter.

Public anger is brewing over Macron’s plans to simplify the unwieldy and expensive pension system, which he says will make it fairer. Trade unions have called on railway workers, Paris public transport staff, truck drivers and civil servants to strike against the pensions overhaul on Dec. 5, and in some cases beyond, threatening chaos ahead of Christmas.

Students and “yellow vests” have sounded a clarion call to join forces with the unions.

Myrtil Devillers, a retired airline steward who still identifies as a “yellow vest” even if he no longer protests on a weekly basis, said Macron was mistaken if he thought the discontent had dissipated.

“People will come out on December 5th. People like us,” said Devillers. “It’s always the same question: what damn do they give about our money?”

Tatar says aim is to open Varosha by end of 2020