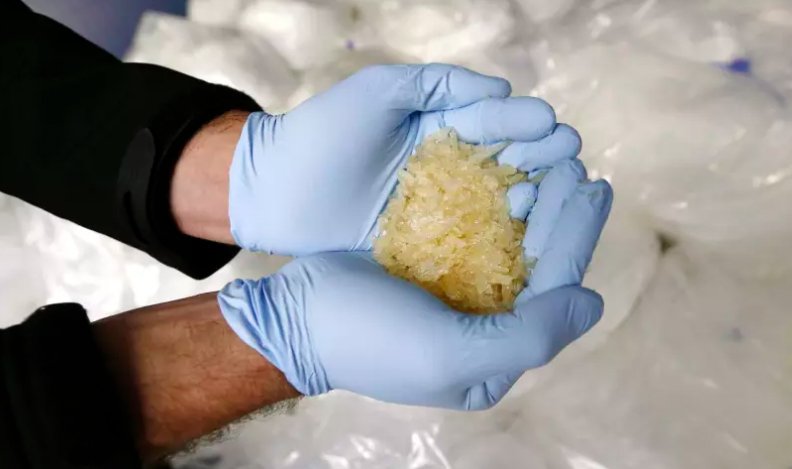 A Greek Cypriot man living in Trachoni was jailed for 25 months in Her Majesty’s Prison, Dhekelia last week, after being found guilty for the possession of drugs with the intent to supply.

The 36-year old was first arrested in June after a crime prevention patrol pulled two men over in their Paphos-registered car driving through the village in the early evening.

Believing this to be suspicious, the officers carried out a thorough search of the vehicle and discovered what was later confirmed to be crystal meth hidden inside a straw.

After their arrest, one of the men confirmed where he had purchased the Class-A drug and police officers quickly launched a surveillance operation on the now convicted man’s house.

In describing how the case and subsequent conviction unfolded, Chief Inspector Panicos Panayi revealed his officers were able to use the man’s own technology against him.

He said: “Firstly, this was an excellent investigation by the SBA Police from start to finish. The patrol officers felt a car registered in Paphos driving through Trachoni at that time of the evening was suspicious and obviously, those suspicions were proven correct.

“After we were able to get information on where the men purchased the drugs, we quickly placed a house under surveillance. The house in question actually had its own CCTV – which is not uncommon for people dealing drugs – and we were able to use footage taken from his own cameras to help us secure the conviction.”

After searching the house, a small amount of drugs were seized alongside “drugs-related paraphernalia”, which the chief inspector revealed was enough to secure the conviction.

He continued: “The weight of evidence against him was compelling and we are very happy with this outcome and the lengthy prison sentence handed down to him.”

The problem of drugs within the Trachoni community has been well-publicised for some years now but thanks to the efforts of the SBA Police and the community itself, things are starting to change.

The chief inspector said that three years ago the problem was at its highest but more recently, thanks to the joint efforts of the police and the community, they are starting to turn a corner.

He said: “The selling and use of drugs is clearly an issue which the SBA Police takes extremely seriously and we will operate a zero-tolerance approach to this crime. If people are caught undertaking in this illegal activity, they will be prosecuted to the full extent of the law.

“As a police force, we have worked tirelessly to combat this problem and after discussions with the community leaders in the village and with their full-support, we are now making inroads into tackling the problem.
“When dealers and users hear about lengthy convictions like this latest one, it makes a difference and will hopefully act a deterrent to them.”

In recent months the SBA Police have made multiple other arrests in connection to the illegal supply of drugs and Chief Inspector Panayi feels this has contributed to fewer drugs on the street.

He explained: “We have managed to damage the supply line (of drugs). By successfully making arrests within the SBAs, alongside those that are being made by our colleagues in the Cyprus Police, we are ensuring that fewer drugs are getting onto the streets and that is so important.

“Drugs not only destroy communities, but they damage families and individuals. We must all play a part in tackling this issue and with the support of the community and various other organisations, we are slowly making a difference and we must continue in that vain to ensure we keep the community a safe and healthy environment for people to live and work in.”