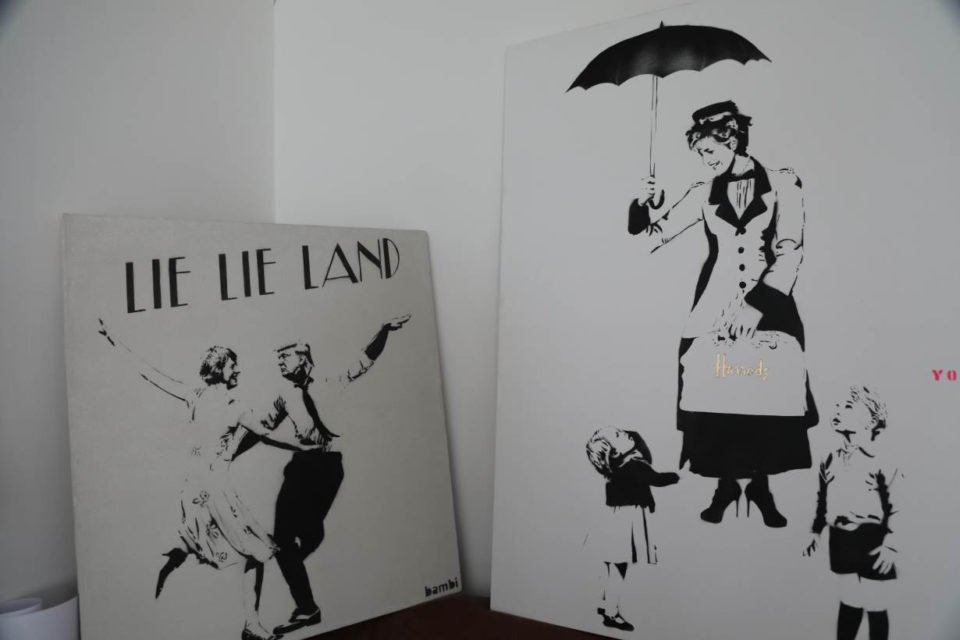 She’s been called the female Banksy, but acclaimed street artist Bambi is sick of how the media portrays women, saying it builds them up only to knock them down.

“We’re in a man’s world, I feel, everything is judged against what a man would do,” said the graffiti artist, as she unveiled her newest work in London.

“Women are always on the back foot.”

Like Banksy, Bambi insists on going incognito so the focus stays on her work, though her graffiti is yet to fetch the sort of record prices notched up by her fellow artist.

Last week, Bambi sprayed a lifesize picture of a female graffiti artist on a north London wall, mocking celebrity culture’s depiction of women. As she painted, her identity was shrouded by a tent and she spoke on condition of anonymity.

The artwork showed 22 sprayed Hollywood-style stars, each emblazoned with the name of an artistic “hero” – from suffragette Emily Davison to singer Nina Simone – and all purportedly sprayed by the sassy, central figure.

The tagline read: ‘weapon of voice’.

Bambi said women in the public eye were “dehumanised” and silenced, be it British lawmaker Jo Cox, murdered a week before the 2016 Brexit referendum, or Meghan Markle, wife of Prince Harry and subject of heavy tabloid speculation.

“It’s difficult because you know we want to look at women in Hello magazine… so they’re almost public property, but the whole paparazzi harassment is terrible,” she said in an exclusive interview staged alongside her freshly sprayed work.

Bambi, whose art is owned by reality TV star Kim Kardashian, singer Adele and actor Brad Pitt, came to fame in 2009 and says she finds comparisons with Banksy “irritating and flattering”.

The café wall picture is part of a new series where women will dominate, Bambi said, with the original canvas to be sold at auction to benefit the Eve Appeal charity, which supports women with gynaecological cancer.

Bambi said that art should entertain but also make a social comment, especially in the aftermath of #MeToo two years ago.

Bambi risks arrest, passersby taking photographs and lorries blocking her walls to produce outdoor art but said she prefers the “democratising” nature of the street to formal galleries.

“It’s not pretentious at all, it’s accessible… it’s an equaliser.”

Her most famous piece was defaced at a nearby spot; it had shown US President Donald Trump dancing with former British Prime Minister Theresa May with the tagline ‘Lie Lie Land’ in a pastiche of the blockbuster film La La Land.

Her biggest hope is to make art that gives women a “home” and provokes debate about gender imbalances, she said.

“It’s a big responsibility, being an artist – a female artist,” she said. “It’s incredible.”