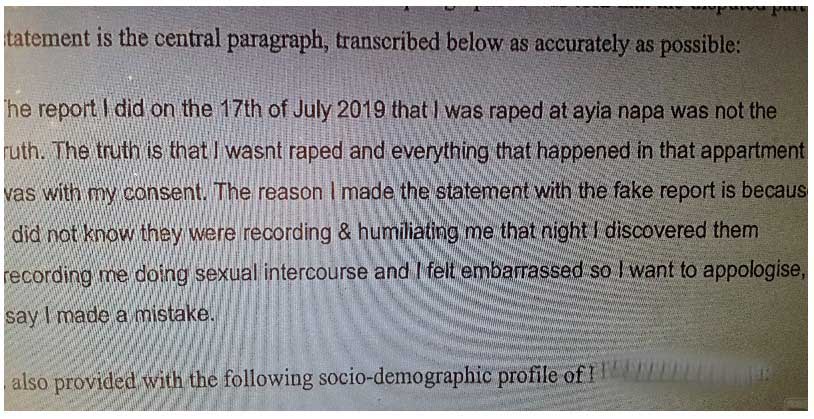 By Nathan Morley and Agnieszka Rakoczy

A forensic linguistic expert has said a British teenager’s statement retracting claims she was gang-raped at an Ayia Napa hotel was unlikely to have been written by a native English speaker.

After being refused permission to give evidence by video link earlier this month, Dr. Andrea Nini appeared in person at the ongoing trial of 19-year-old girl, accused making a false rape claim against a group of Israeli tourists in July.

The Israelis were arrested and interrogated but later released, with police claiming the young woman had fabricated claims and withdrawn her complaint, however, she insists her retraction was extracted under duress and typed up by police without her input.

The accused says the statement was written in “Greek English,” a reference to the poor grammar and sentence structure. In previous testimony, she asserted: “There were grammatical mistakes all the way through”.

During three hours of testimony at Paralimni District Court, Nini concluded it was unlikely the retraction was written by a native English speaker.’

An exact copy of the retraction statement – reproduced below – was presented to the court:

“The report I did on the 17th of July 2019 that I was raped at ayia napa was not the truth. The truth is that I wasnt raped and everything that happened in that appartment was with my consent. The reason I made the statement with the fake report is because I did not know they were recording & humiliating me that night I discovered them recording me doing sexual intercourse and I felt embarrassed as I want to appologise, and say I made a mistake.”

Last month the accused said: ‘I’m very well educated. I’m going to university; I got an unconditional offer so there is no way I would write a paragraph like this.’

Speaking to the Cyprus Mail, the young woman’s lawyer, Michael Polak said: “We were very pleased to have Dr Nini’s evidence and his report before the Court. Dr Nini, who is a top forensic linguist, has applied a methodology to the word usage which demonstrates that it is highly unlikely that the disputed retraction statement was composed by a native English speaker”.

Polak said Nini was able to come to this strong conclusion by applying a methodology in which “he identifies the combination of words and certain word usage and then compares this to the usage with the body of English-speaking text of over a trillion words”.

Judge Michalis Papathanasiou said he will take several weeks to consider the evidence.

Earlier this month a psychologist gave testimony via video-link confirming the young woman was suffering from post-traumatic stress disorder (PTSD).

The teenager’s family have set up a crowd-funding webpage asking for money to help with legal costs, which has raised more than £42,600.

Guterres: the people of Cyprus deserve to know that this time it is different (Updated)