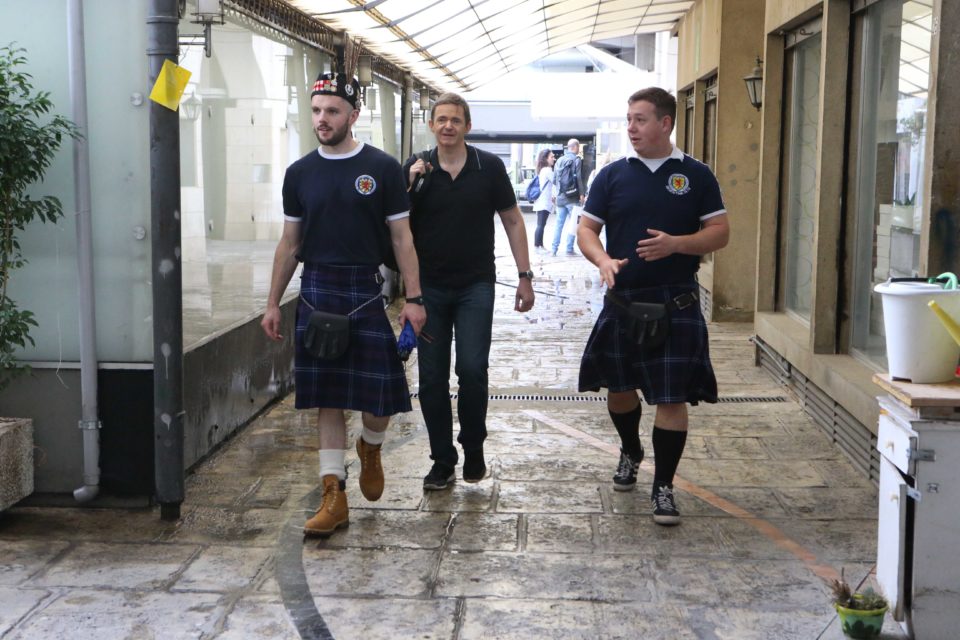 Scottish fans walking in downtown Nicosia the day before the game.

Cyprus face Scotland in the penultimate Euro 2020 qualifying game in group I at GSP Stadium in Nicosia.

Ran Ben Shimon’s men are currently third in the table with 10 points and with no chance of making it to the European Championships, seeing as both Belgium and Russia are arithmetically first and second.

Cyprus are one point ahead of Scotland. The game will have a strong impact in determining the team that will finish third in the group, which will also undoubtedly improve its overall ranking.

“We have a great opportunity against Scotland,” said Ben Shimon.

“We have the chance of finishing the group in a position we never occupied before.

“The players are ready and will certainly be up for the challenge.

“I have complete confidence in them, and I hope to see many fans out to support them on the stands.”

Regarding Scotland’s many absences, the manager said “it will not matter what players we will face.”

“We are also missing many players from the squad, but that’s not the focus.”

Ben Shimon said “the realistic goal from the beginning of the qualifying campaign was to finish third in the group,” an opinion shared by Merkis.

“The biggest motivation for us is to achieve something we have never achieved, the third place.

“We are ready and will give 100 per cent. I hope the crowd will understand just how important the achievement will be and will stand behind us during the game.”

Over 2500 Scotland fans are expected to turn out at the game.

As far as Scotland are concerned, midfielder Scott McTominay, who is enduring a brilliant spell at Manchester United despite his team’s lacklustre season, has been withdrawn from the squad due to an ankle problem.

The 22-year-old initially suffered the injury in United’s 3-0 Europa League victory over Partizan Belgrade last Thursday and aggravated the problem in the 3-1 Premier League win over Brighton & Hove Albion on Sunday.

United did not say when McTominay, who has featured in all 12 league games this season, would return, but he would miss both Scotland’s final Euro 2020 qualifying games against Cyprus and their home clash against Kazakhstan on September 19.

Scotland did not provide any details of their injuries, with manager Steve Clarke calling up midfielders Celtic’s Lewis Morgan and Derby County’s Graeme Shinnie to the squad as replacements.

Upcoming TEDx event promises to be an Unbelievable day