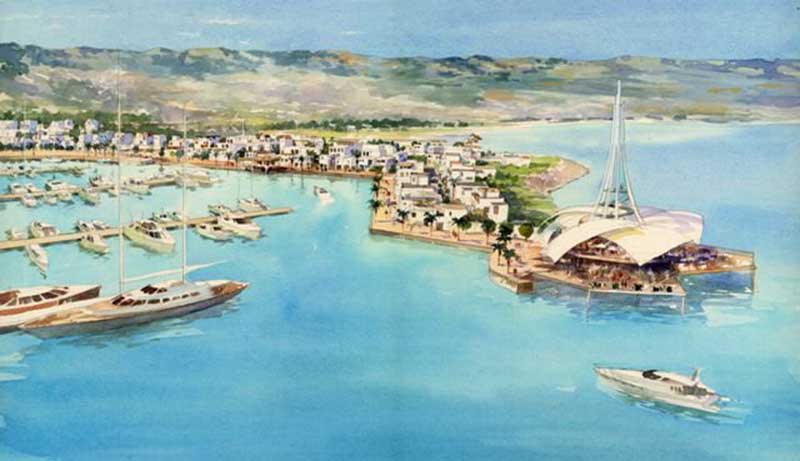 An artist's impression of the Poseidon marina

The cabinet gave the green light on Friday for a new study which will determine if a marina in Paphos will be combined with a cruise ship infrastructure.

Following the meeting, Deputy Tourism Minister Savvas Perdios said the official announcement for the tender to prepare the study would be made in the next two to three weeks.

After this is completed, the results will be presented to the cabinet, Perdios said.

The second part will be about defining the terms of reference for the construction of the project.

The government has over many years invited and rejected tenders for the construction of the project.

The tender was first announced in 2007 and in 2008. It was initially awarded to the Cybarco-Pandora consortium, which includes the Leptos Group.

However, the other two bidding consortiums, Pafilia and Poseidon, a joint venture in which Aristo Developers is a major stakeholder, challenged the award at various stages. They claimed the winning developer used inside information to offer a lower figure for the construction of the marina, and won the tender.

In December 2015, the supreme court voted in favour of Poseidon and their €215m project. They then had to provide proof of funds – a total of 60 per cent of the amount, which was set at €125m.

In 2017, the then marina committee saw Poseidon lose out to Pafilia developers after the body found that evidence supplied to secure financing for the multi-million-euro project was ‘not satisfactory’.

The Poseidon consortium – a joint venture in which Aristo Developers is a major stakeholder – turned to the supreme court of Cyprus after their bid was rejected. The court found that the committee responsible for overseeing the Paphos marina tender process was unlawful, making the previous decision void.

Our View: Plan for affordable housing has been long overdue