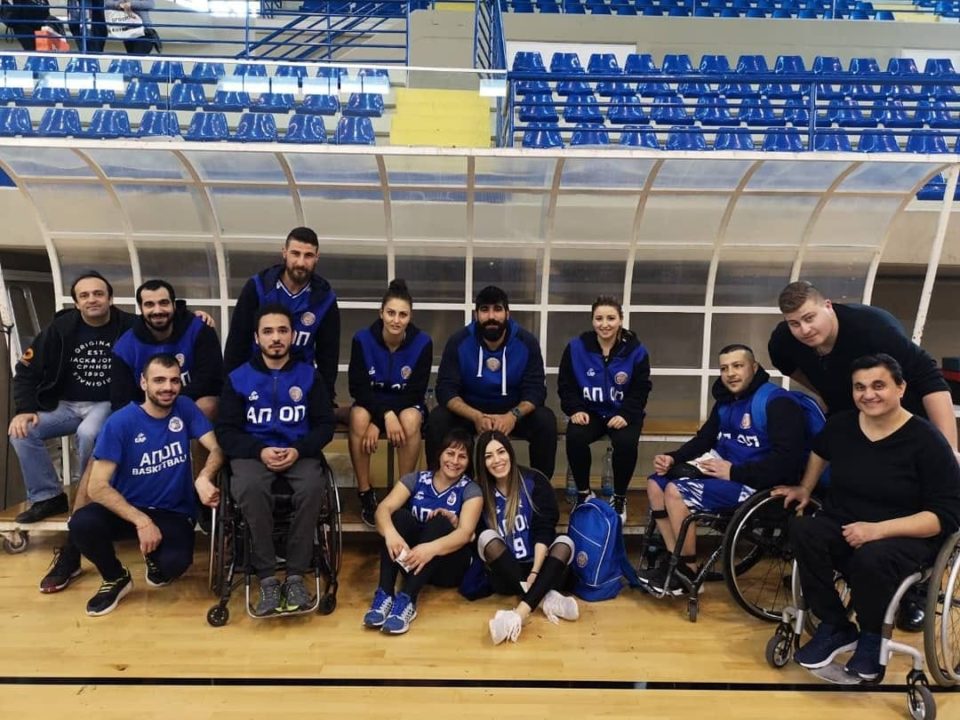 Ali is a member of the APOP wheelchair basketball club

A young Iraqi man, who was paralysed from the waist down after being attacked by Isis terrorists five years ago, hopes that his request for a residence card will finally be approved by the Cyprus authorities.

This would allow him to travel abroad for a specialised operation that may enable him to walk again.

The Cyprus authorities rejected his application two years ago, telling him ‘your country is safe’. Ali (his surname has been withheld) was dismayed.

“Iraq is not safe at all. It’s the opposite. Brothers are even killing brothers. There are demonstrations but no-one seems to care,” Ali, 22, told the Sunday Mail.

He is warm, friendly and smiles a lot despite his predicament. During his three years in Cyprus, Ali has learned to speak good English, mainly with the help of an app on his phone. He is also studying online, determined to complete his high school diploma.

Ali wanted to be a pharmacist, but thinks this is now a dim possibility because he can’t move from the waist down and, he says, experiences tremendous pain in his hips, which are calcified and don’t really move.

“I am hoping to travel, as one of my doctors told me of a specialist operation that can be carried out in the UK, the USA or Germany and I may be able to walk again. I need to try everything, but I can’t travel as I have an asylum seeker status here and I need ID documents to travel. The authorities won’t give them to me, it’s so frustrating,” he said.

Ali was just 17 and in his last year of school when, terrified, he jumped off a roof at his home in Iraq, with Isis members in hot pursuit. As he lay splayed, immobile and bleeding on the ground, Isis forces checked his body and left him for dead. Terrified members of his family, including his mother, watched in horror.

Ali’s family were a prime target for Isis. They were living in Salahudin, a governorate north of Baghdad, when Isis forces stormed the area. Ali’s father, Maad, had previously worked at the Serbian Embassy in Kurdistan, travelling back and forth to his job from the family home. His primary task was to transport ‘important documents for the Serbian Embassy,’ Maad told the Sunday Mail.

But his work made him a primary target for Isis.

“They didn’t like anyone that worked for the government or had my kind of job. Isis came to our house many times and wanted to take me. We have family members that were taken and we have never heard from them again, they have disappeared.”

It was June 2014 and Isis had just proclaimed itself a worldwide caliphate. As its ruthless fighters stormed the Salahuddin area, the police and army fled to Baghdad. Gun-toting men clad in black, their faces covered, soon terrorised the abandoned populace.

Isis also erected huge screens in the streets showing footage of people being dragged away, tortured and killed, he added.

Maad was threatened a number of times. “I couldn’t come home, Isis would kill me,” he said. “They stopped people in the street to speak about ‘their Islamic country’ and they told us that we were not allowed to smoke, have mobile phones and men were not allowed to wear shorts. We were also told not to shave or cut our hair. There were many rules to be obeyed.”

It was one of Isis’ repeated visits to the family house to seize Maad – who wasn’t there – that its fighters spotted Ali. He was terrified, certain he would be captured or killed like other relatives. He fled to the roof of their building, chased by the gunmen.

“I jumped from the roof onto a carport below, but twisted and fell on my back, breaking it. I was unconscious with blood pouring from my ears. They thought I was dead and left me.”

He was rushed by ambulance to an emergency hospital in Kurdistan. His father was waiting at a checkpoint with all of the necessary paperwork.

“I broke my D12 vertebra and have damage to my spinal cord, I am paralysed from my waist down,” Ali said.

He stayed in Kurdistan for two years while doctors operated on him – unsuccessfully. They didn’t have the necessary expertise or equipment. His father sought assistance for Ali from the Red Cross, the UN and other organisations, but said none would help.

However, one of Ali’s doctors in Iraq collaborates with the American Heart Institute in Nicosia and they were willing to operate and sorted out his visa for him in 2016.

This operation, unfortunately, was also unsuccessful. Doctors have now told Ali that he has a 50 percent chance of improvement if he undergoes a specialist operation, which is not available in Cyprus. “There is hope as his spinal cord is not cut,” Maad said.

The family has an additional problem of obtaining medical supplies in Cyprus. As none currently has Cyprus IDs, they are not able to sign up to the Gesy national health scheme, so have to pay for any supplies or medicine themselves.

Ali uses around 150 catheters and 20 urine bags a month. He also uses pampers and gloves and has to take vitamin C, vitamin B12 and vitamin D3.

“How can I get the money to pay for these?” he said. “I can’t work and my mother looks after me. I have a brother who is 11 and a sister of 12 that are at primary school here.”

The family receives food coupons, a small allowance to cover electricity and water and a rent allowance. Caritas, a charity working with refugees, also gives them some food donations, but this is still not enough for a family of five.

Ali, who also speaks a little Greek, claimed asylum in 2016. He has made friends and plays basketball with APOP wheelchair basketball club.

“I liked sport before so I really enjoy it. Most of the team is Cypriot and I am the first from Iraq. They are very friendly.”

Ali now has a lawyer after family friends gathered the funds and has applied to the court for his resident’s card. He is currently waiting to hear the outcome.