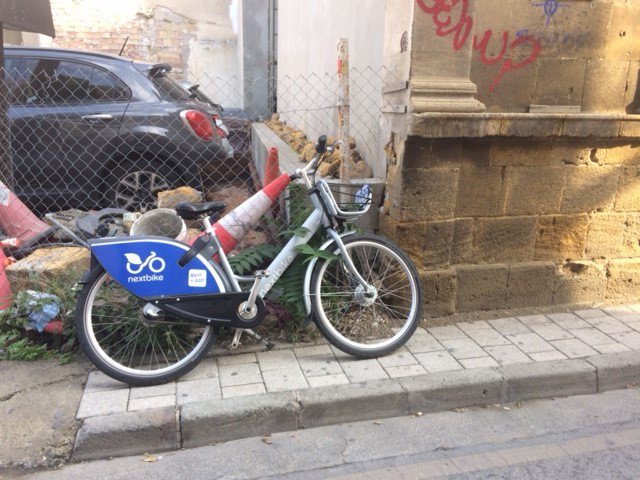 Should we be worried that for the past two months the flash new bicycles from the Nextbike rental company have been seen abandoned all over central Nicosia, including the one outside the newspaper’s office which lay there for days?

All is going well, says the owner of the bike rental company, Neophytos Ioannou, who brought the service to Nicosia in August. There is nothing unusual for a bike to be found on a pavement anywhere in the town, as the idea is just that. People can pick them up from a pick up/drop off station and return them anywhere, home, work or any other destination.

“One of the team will pick it up,” Ioannou said, “or some other person who wants to rent it will take it from where it is.”

The bikes can be easily located using an app and a terminal is not needed to return them. One simply has to enter into the system whether the bicycle is meant to be ‘parked’ or ‘returned’.

Two months after the start of operations of Nextbike in Nicosia, business is good though much still needs to be done, Ioannou said.

“I believe we are succeeding, there are almost 1.5 rentals per bike per day, but we are new in Nicosia and there are a lot of things to do,” he said.

By this, he doesn’t mean only more stations and more bikes, but getting more involved in activities so people get to know how the system works.

“We want people to see the bikes as their bikes,” he added. Activities, he explained, not only involve municipalities but also charities and getting companies to participate.

Nextbike encourages companies to involve their employees as a way of expanding their customer base. They arrange days when “all of us ride a bike”, thus the new bikers not only understand how easy it is to rent a bike, but that “their home might be just a five-kilometre bike ride away. Once they try it they will not stop.”

This year is just the beginning of campaign, the company owner said. “Next year we will be everywhere every week.”

In Limassol, the company has operated successfully since 2014. But with no coastal promenade to cycle along, and fewer tourists who might pick up a bike can it really be as successful in Nicosia?

According to Ioannou, it will be. “Most of our customers are locals, and the time has come for Nicosia.”

The initial registration can be completed via an app, the website, the computer at a terminal and by calling customer service by taking three simple steps.

Once the free registration is completed, the customer will be charged €2 for the first 60 minutes, and €1 for every additional hour. The maximum per day, for 24 hours, is €8.

It is also possible to pay for a yearly contract with installments of €10 per month and for businesses to pay a fee for an annual membership with the price varying according to the number of employees. According to the website, prices for those with longer contracts start from 33 cents a day.

Bolivians queue for chicken and fuel as protests cripple highways