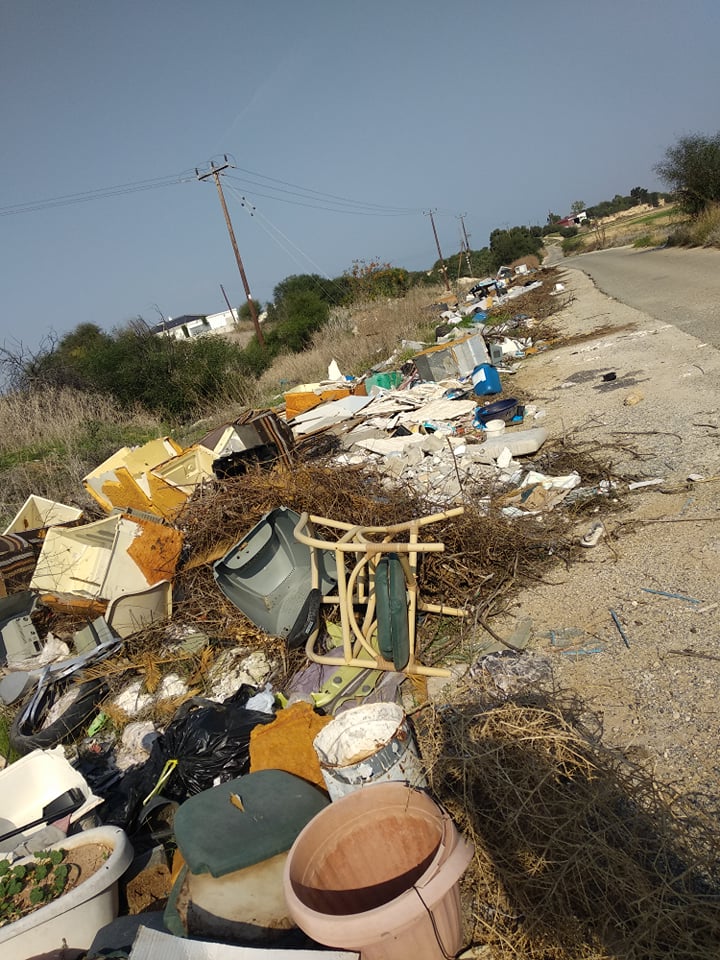 Photos taken last week show that fly-tipping near the Natura 2000 zone around Paralimni lake remains out of control despite the opening of a green point nearby two years ago, as authorities squabble over who is responsible.

Furniture, mattresses, electrical appliances, tiles, large pieces of wood, green waste and a lot of plastic waste has mounted up along the road just a few metres from Paralimni lake, an area established as Natura 2000 zone in 2009. The lake itself has also become a dumping ground.

The lake is one of the few natural wetlands of Cyprus and the second largest after Larnaca salt lake, while it hosts the endemic grass snake called natrix-natrix cypriaca which can only be found in Cyprus.

The lake and the road leading up to it fall under two municipalities, Paralimni and Sotira, but neither seem prepared to take full responsibility.

“The cleaning of the lake and the area around it falls in the responsibilities of the environment department [of the agriculture ministry] as a Natura 2000 zone,” said Vivian Trisokka, head of the health services of Paralimni, But she added a cleaning up operation was underway with lyceum students also taking part on Sunday.

Spokeswoman for the agriculture ministry, Marianna Karagiorgi, said clearing away rubbish is a municipal responsibility despite the area being in a Natura 2000 zone.

“We will send an official to check on the issue,” Karagiorgi said.

She highlighted that the ministry recently issued a decree appointing 74 inspectors to monitor fly-tipping. The inspectors will be able to issue fines of up to €4,000 and will take on their duties on December.

The decree was approved following municipalities’ complaints about lack of staff and their inability to control the issue of illegal dumping themselves, said Karagiorgi.

“No one was ever fined. People who illegally dump their trash they know when to do it. They quietly go to remote areas at midnight,” said Andreas Flourentzos, who also works for the health services of Paralimni municipality.

A green point is situated around 15 minutes away from the lake near Saint Panteleimon church in Paralimni where the public can dispose any sort of waste.

Although the lake is the responsibility of Paralimni municipality, the small road nearby – where most of the rubbish is dumped – falls within Sotera district.

Sotera’s mayor, George Takkas said he was not aware of the issue when contacted from Sunday Mail.

“We did not notice it,” he said, adding that the municipality lacks human resources.

He added, however, that the municipality does clear that road once or twice a year.

For environmentalists the issue is about more than the unsightly mess at a natural beauty spot. The chemicals from electrical appliances might harm the ecosystem of the lake said Lefkios Sergides from Terra Cypria.

“Apart from the famous grass snake, Natrix-natrix cypriaca, a number of rare eurasian and endemic plants grow around the lake, while it is one of the most important breeding sites for spur-winged lapwing bird on the island,” he said.

The European Commission filed a court case against Cyprus in 2012 on account of lack of proper protection for the endangered water snake, while the government was called to take measures that were deemed enough to file away the case.

Almost three years ago, Cyprus News Agency issued an announcement to put an end to the “embarrassing images in Paralimni lake” following a citizen’s post on social media which included pictures of large trash items in the lake, while more recent pictures rose over the summer on Facebook.