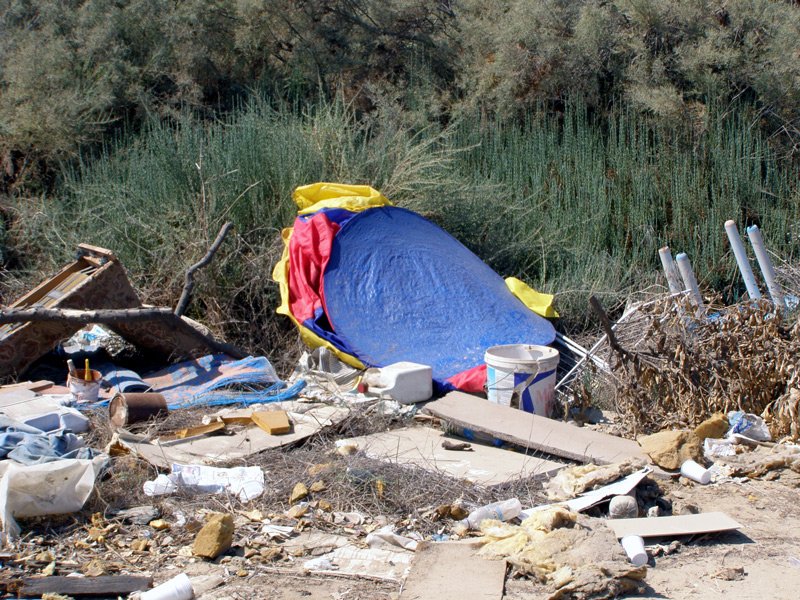 British bases accused of not doing enough to prevent littering

The Kouris river has become an informal dumping ground for rubbish and the British bases are not taking the issue seriously, the mayor of Erimi, Panicos Hadjihambis, said this week.

All types of rubbish have piled up along the side of the river including old sofas, household goods and industrial items. Because parts of the Kouris river pass through the jurisdiction of the British bases, questions have been raised over how such a situation has arisen.

The incident has provoked strong reactions from the residents in Erimi, Kantou and Episkopi, areas that are flanked by the river.

Hadjihambis has called on the relevant authorities to do all they can to fight the rampant rubbish dumping. He said although the ministry of agriculture is responsible for managing the river, it is under the jurisdiction of the British bases.

He singled out the British bases and said that despite repeated calls for the clearing of the rubbish from the riverbed, nothing has been done.

British bases spokesman Kristian Gray told the Sunday Mail: “we investigate any reports of littering including at the Kouris river.”

Hadjihambis said this was not the case.

“What investigations? They don’t investigate anything. The whole place is a rubbish dump. So, don’t tell me that they’re checking and monitoring.”

Gray said that dumping of rubbish is illegal and punishable with a fine up to €341. “Such a law is all well and good, however you have to find them first to fine them,” the mayor replied.

The mayor called for much harsher penalties and for people to be taken to court. He stated that the current measures are ineffective, and the authorities at the British bases are mostly indifferent.

The Kouris river measures 38km in length originating in the Troodos mountains and passing through the Limassol district. Erimi is located on the river’s eastern side and Kantou on the west. The final part of the river passes through Britain’s Akrotiri base before emptying into the ocean.

The minister of agriculture announced on Monday it was appointing 74 inspectors who will be assigned duties across the island in a bid to stamp out fly-tipping.

The inspectors will assume their duties next month, satisfying a demand raised by municipalities which can no longer cope with the scale of illegal dumping.

A ministry announcement said the inspectors will have the power to issue on-the-spot fines of up to €4,000 to people who throw their rubbish in unauthorised areas.

“We have laws already and people are dumping on a professional level and using tractors, can’t you see them and catch them?” said Hadjihambis when asked if the new measures will have an impact.

“As a country, as a nation we have serious issues.”

The British base at Akrotiri covers an area of 123 square kilometres which Hadjihambis said is small enough to be well monitored and maintained. He accused the bases of not being motivated or interested enough to tackle the issue seriously.

“The SFBA are actively engaging with the three communities to discuss how monitoring can be improved and what assistance can be provided,” Gray said in response.

Gray added that “community councils are responsible for clearing their areas of litter and should routinely monitor them.”

Hadjihambis hit back saying “the local communities cannot enforce the law in that area.”