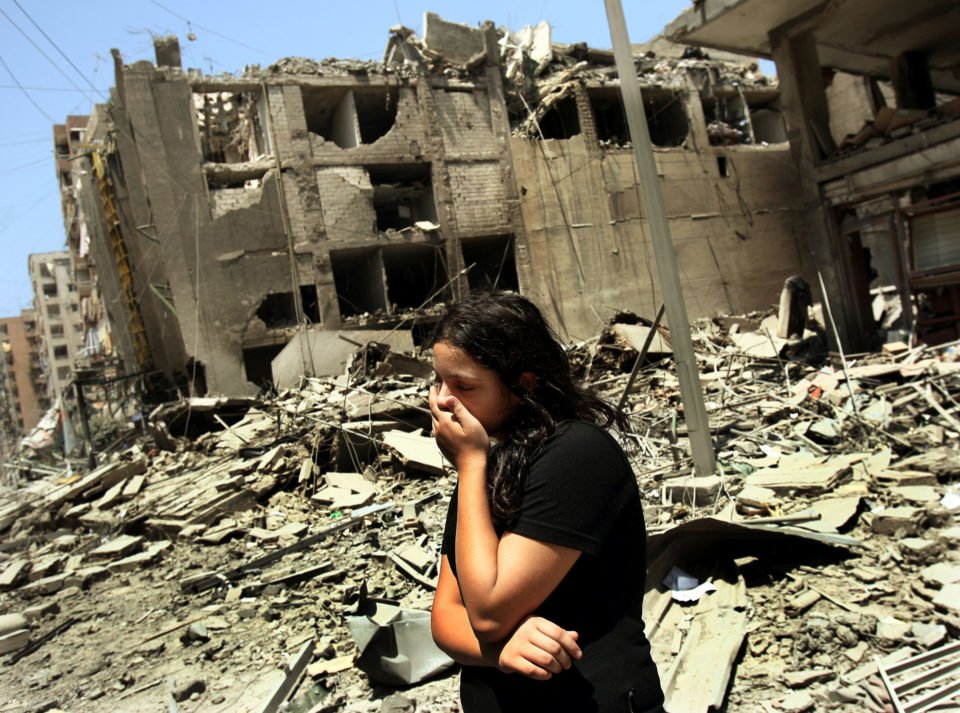 FILE PHOTO: A Lebanese woman stands along a devastated street in the Hizbollah stronghold in the south of Beirut July 25, 2006. REUTERS/Shannon Stapleton/File Photo

Lebanon is like a sinking ship that will go under unless action is taken, Nabih Berri, the speaker of parliament was quoted as saying on Monday, referring to the country’s deep economic and political crisis.

“The country is like a ship that is sinking little by little,” al-Joumhuria newspaper cited him as telling visitors. “If we don’t take the necessary steps, it will sink entirely.”

An-Nahar newspaper quoted him as likening the situation of the Lebanese people to that of passengers on the Titanic, the cruise ship that sank in 1912 after hitting an iceberg.

Demonstrations against Lebanon‘s ruling elite have plunged the country into political turmoil at a time of acute economic crisis, driven by deepening anger at sectarian politicians who have dominated the government since the 1975-90 civil war.

One of the most severe periods of turmoil since the end of the conflict, it stands out from previous episodes because of financial pressures that have led to a scarcity of U.S. dollars and a weakening of the Lebanese pound.

Former Lebanese Prime Minister Rafik al-Hariri is killed on Feb. 14 when a massive bomb exploded as his motorcade travelled through Beirut; 21 others also died.

A combination of subsequent mass demonstrations and international pressure force Syria to withdraw troops from Lebanon. Lebanese Shi’ite allies of Damascus stage their own big rallies in support of Syria.

In July, Hezbollah crosses the border into Israel, kidnaps two Israeli soldiers and kills others, sparking a five-week war. At least 1,200 people in Lebanon and 158 Israelis are killed.

After the war, tensions in Lebanon simmer over Hezbollah’s powerful arsenal. In November, Hezbollah and its allies quit the cabinet led by the Western-backed Prime Minister Fouad Siniora and organise street protests against it.

Hezbollah and its allies maintain a sit-in protest against the Siniora government for the entire year. Their stated demand is veto power in the government.

In May, fighting erupts at a Palestinian camp in northern Lebanon between the Lebanese army and Sunni Islamist militants of the Fatah al-Islam group. Thousands of Palestinian refugees are forced to flee the Nahr al-Bared camp. In September Lebanese troops seize complete control of the camp after more than three months of fighting which kills more than 300 people.

May 6, 2008 – Siniora’s cabinet accuses Hezbollah of running a private telecoms network and installing spy cameras at Beirut airport. The cabinet vows legal action against the network.

May 7 – Hezbollah said the move against its telecoms network was a declaration of war by the government. After a brief civil conflict Hezbollah takes control of mainly Muslim west Beirut.

May 21 – After mediation, rival leaders sign a deal in Qatar to end 18 months of political conflict. Parliament elects Michel Suleiman, the army chief, as president.

In January, Saad al-Hariri’s first government is toppled when Hezbollah and its allies quit because of tensions over the U.N.-backed Special Tribunal for Lebanon.

The tribunal later indicts four senior members of Hezbollah for the murder of Rafik al-Hariri. Hezbollah denies any role in the assassination. Its leader Sayyed Hassan Nasrallah said the authorities would not be able to find the indicted men.

A fifth Hezbollah member is indicted in 2013.

A crisis about waste erupts when the authorities closed the main landfill site near Beirut, having arranged no alternative. Large protests broke out as huge mounds of rotting waste filled streets and demonstrators chanted “You stink!” at the government. It became a glaring symbol of a sectarian power system unable to meet basic needs like electricity and water.

Saad al-Hariri’s ties with Saudi Arabia, which is furious at Hezbollah’s expanding role in Lebanon, hit a nadir in November 2017 when it was widely acknowledged Riyadh had forced him to resign and held him in the kingdom. Saudi Arabia and Hariri publicly deny this version of events, though France’s Emmanuel Macron confirmed that Hariri was being held in Saudi Arabia.

Amid stagnant economic growth and slowing capital inflows, the government is under pressure to curb massive budget deficit.

Proposals to cut the state wage and pension bill meet stiff opposition. The government vows to enact long-delayed reforms but fails to make progress that might unlock foreign support.

Oct. 17 – Government announces a 20 cents-per-day fee for internet calls, including Facebook and WhatsApp. It also proposes to raise VAT to 15 per cent by 2022. Thousands protest, accusing leaders of corruption and mishandling the economy.

Oct. 29 – Hariri quits, against the wishes of Hezbollah.

An examination of contemporary issues

The three guarantors failed miserbaly in their duties