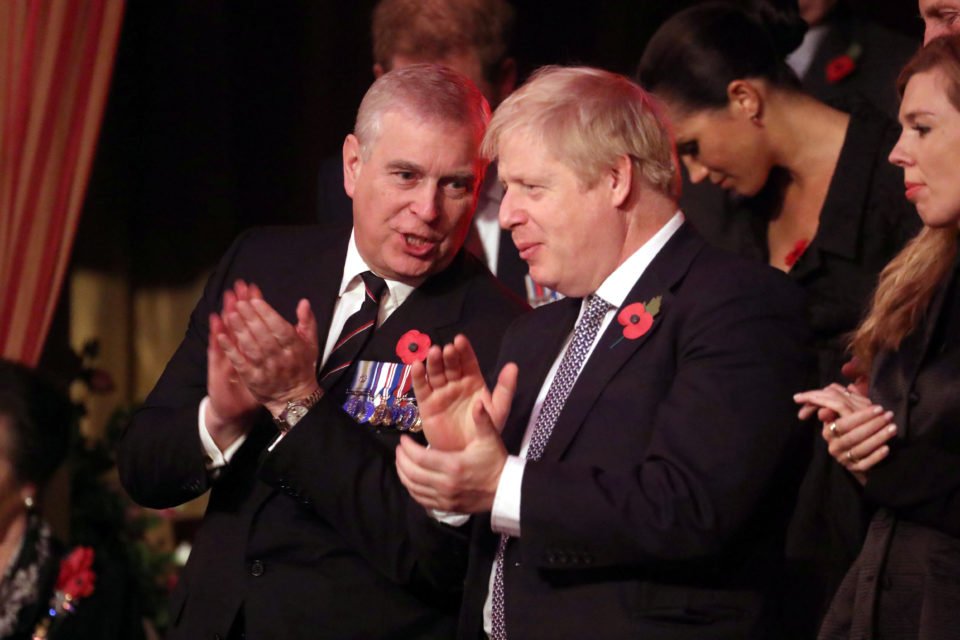 Prince Andrew and Prime Minister Boris Johnson attend the Royal British Legion Festival of Remembrance at the Royal Albert Hall in London last week. The PM on Monday refused to get dragged into the issue

British Prime Minister Boris Johnson refused on Monday to get dragged into a scandal surrounding Prince Andrew, who has faced a backlash after an interview in which he denied having sex with a teenage girl and spoke of his relationship with U.S. financier Jeffrey Epstein.

Andrew, Queen Elizabeth’s second son, said in the interview aired on Saturday that he could not have had sex with a teenage girl at a socialite’s London home because he returned to his house after a children’s party on the night in question and has no recollection of ever meeting her.

Andrew’s comments to the BBC drew scorn in the British media, which said his explanations were unsatisfactory while lawyers for Epstein’s victims said the prince showed little sympathy for those abused.

Asked whether he shared “the nation’s incredulity” about Andrew’s account of his behaviour and what he would advise the queen to do, Johnson said: “I won’t get dragged into commentary about matters concerning the royal family.”

Earlier, Johnson was asked by a reporter whether he would encourage Andrew to cooperate with U.S. authorities over Epstein’s actions. Johnson replied: “Nice try.”

In the interview, Andrew was at times rambling and contradictory.

He said Epstein’s behaviour had been “unbecoming”, but he did not regret their friendship because of the opportunities it gave him to meet business people. Epstein killed himself in August while being held on sex-trafficking charges.

One of Epstein’s accusers, Virginia Giuffre, has said she was forced to have sex with Andrew in London, New York and on a private Caribbean island between 1999 and 2002, when she says Epstein kept her as a “sex slave”.

During the hour-long interview, Andrew gave various reasons why her account of meeting him sweating and dancing almost two decades ago at a London nightclub before having sex with him could not be true.

These included that he suffered from a medical condition that stopped him perspiring, that he “never really partied” and he avoided “public displays of affection”.

Yet British media published pictures of Andrew at a host of parties in the company of different women, some showing him displaying affection and clearly perspiring.

Two days after it aired, the interview was still front-page news for British newspapers, which described it as a “car crash” that raised questions about Andrew’s future.

“Prince Andrew has brought shame on the UK and continues to disgrace himself as he shows no remorse or insight into what he has done,” said Graham Smith, head of the anti-monarchist group Republic.

Check mate: how to wear the heritage trend