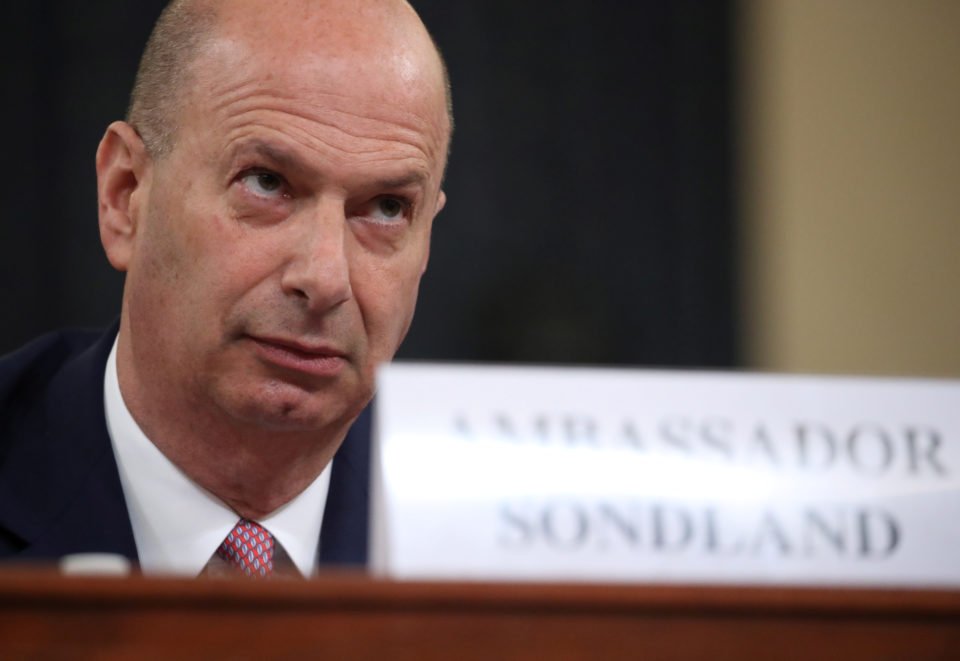 A senior US diplomat told lawmakers on Wednesday that President Donald Trump expressly ordered him and others to help pressure Ukraine into investigating a political rival of the president, providing some of the most significant testimony to date in the House of Representatives impeachment inquiry.

In testimony that also put Secretary of State Mike Pompeo at the center of the Ukraine controversy, US Ambassador to the European Union Gordon Sondland said Pompeo was “fully supportive” of the efforts to push Ukraine into carrying out two investigations that would benefit Trump politically at home.

Sondland, a wealthy hotel entrepreneur and Trump donor, said he worked with Trump’s personal attorney Rudy Giuliani on Ukraine issues on “the president’s orders,” further detailing Trump’s active participation in a controversy that threatens his presidency.

Giuliani’s efforts earlier this year to get Ukrainian President Volodymyr Zelenskiy to investigate Democratic presidential candidate Joe Biden and his son “were a quid pro quo for arranging a White House visit” for the Ukrainian leader, Sondland said, using a Latin term meaning to exchange a favour for another favour.

Sondland described Trump in May telling him along with Energy Secretary Rick Perry and then-US special envoy to Ukraine Kurt Volker to work with Giuliani on Ukraine policy at a time when the former New York mayor was working to get the Ukrainians to do the politically motivated investigations.

“Secretary Perry, Ambassador Volker and I worked with Mr. Rudy Giuliani on Ukraine matters at the express direction of the president of the United States,” Sondland told the House of Representatives Intelligence Committee, which is spearheading the Democratic-led impeachment inquiry.

The inquiry focuses on a July 25 phone call in which Trump asked Ukraine‘s Zelenskiy to carry out two investigations. One involved Biden and his son Hunter, who had worked for Ukrainian energy company Burisma. The other involving a debunked conspiracy theory promoted by some Trump allies that Ukraine, not Russia, interfered in the 2016 US election.

Trump is seeking re-election in 2020. Biden, the former vice president, is a leading candidate for the Democratic nomination to face Trump.

The investigation could lead the House to approve formal charges against Trump – called articles of impeachment – that would be sent to the Republican-controlled Senate for a trial on whether to remove him from office. Few Republican senators have broken with Trump.

Sondland’s comments cast more light on the role of Pompeo, a close Trump ally who has declined to defend State Department witnesses who have been attacked by Trump and other Republicans for cooperating with the impeachment inquiry.

Sondland provided correspondence showing that he and Pompeo communicated about his effort to get Zelenskiy to commit to undertake investigations as a way to free up $391m in security aid for Ukraine that Trump had withheld. The aid eventually was provided in September.

“All good. You’re doing great work; keep banging away,” Pompeo told Sondland in early September, according to email correspondence cited in his testimony.

“Everyone was in the loop,” Sondland said.

Sondland said that even as late as September 24 – the same day the House launched its impeachment inquiry – Pompeo was directing Volker to speak with Giuliani.

Democrats have accused Trump of using the frozen aid and Zelenskiy’s desire for an Oval Office meeting as leverage to pressure a vulnerable US ally to dig up dirt on political adversaries.

Sondland said Trump never told him directly that the aid to Ukraine was conditioned on Ukraine announcing investigation.

“I think we know now … that the knowledge of this scheme was far and wide and included among others Secretary of State Pompeo as well as the vice president,” said Adam Schiff, the Democratic chairman of the Intelligence Committee, referring to Vice President Mike Pence.

Schiff said Pompeo and Trump “have made such a concerted and across-the-board effort to obstruct this investigation and this impeachment inquiry. They do at their own peril.”

Career US diplomats have portrayed Sondland in their testimony as a central figure in what became a shadow and “irregular” Ukraine policy operation, undercutting official channels and pressing Kiev to investigate the Bidens.

Sondland said he was “adamantly opposed” to any suspension of aid to Ukraine because Kiev needed it to fight against Russian aggression.

Trump has denied wrongdoing, called the inquiry a witch hunt and assailed some of the witnesses including current White House aides.

Sondland was tapped as Trump’s envoy after he donated $1 million to the president’s inauguration. In October, Trump called him “a really good man,” but after Sondland’s amended statement to House investigators this month the president told reporters at the White House, “I hardly know the gentleman.”

According to Reuters/Ipsos polling, 46 percent of Americans support impeachment, while 41 per cent oppose it.