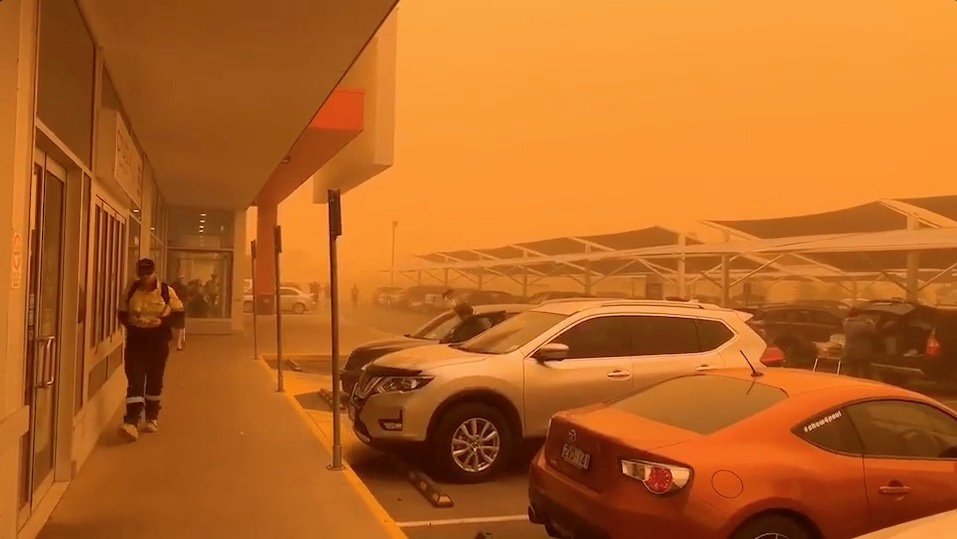 An orange sky is seen as a dust storm blankets Mildura, Victoria, Australia November 21, 2019, in this still image obtained from a social media video. Courtesy of Kenny Fong/Social Media via REUTERS. ATTENTION EDITORS - THIS IMAGE HAS BEEN SUPPLIED BY A THIRD PARTY. MANDATORY CREDIT KENNY FONG. NO RESALES. NO ARCHIVES.

SYDNEY, Nov 21 (Reuters) – Firefighters battled against hundreds of bushfires across Australia‘s east coast on Thursday as scores of blazes sprang up in new locations, triggering warnings that it was too late for some residents to evacuate.

Australia has been battling wildfires across several states for days, endangering thousands of people in many communities. Blazes so far this month have killed at least four people, burnt about 2.5 million acres (1 million hectares) of farmland and bush and destroyed more than 400 homes.

The early arrival and severity of the fires in the southern hemisphere spring follows three years of drought, which has left bushland tinder-dry and been linked by experts to climate change.

Firefighters have followed the crisis across four states as extreme temperatures and high winds sparked wildfires in new areas, even as they struggle contain existing fires.

On Thursday, it was Victoria’s turn, with dozens of fires burning across the state by early afternoon. Authorities warned locals in towns about 50 km (31.1 miles) north of Ballarat, the state’s third largest city, that it was too late for them to evacuate safely.

“You are in danger, act now to protect yourself,” Victoria Country Fire Authority said in an alert. “It is too late to leave. The safest option is to take shelter indoors immediately.”

Authorities had earlier issued a Code Red alert, which indicates the worst possible bushfire conditions, warning people that should a fire start it will be fast moving, unpredictable and likely uncontrollable. It was the first Code Red alert issued by Victoria in 10 years.

In New South Wales state, strong winds blew smoke from 60 fires still burning over much of Sydney, leaving the harbour city and its famous landmarks shrouded in thick smog.

Officials told parents to keep children inside as pollution recordings showed the smoke at five times the level considered hazardous.

State officials also imposed tough new water restrictions on Sydneysiders, to kick in from Dec. 10 when a key dam is expected to be down to 45% capacity. Residents will face fines if they use hoses to water their gardens and wash their cars.

The unrelenting conditions have sharpened attention on the climate change policies of Prime Minister Scott Morrison, who rejected rejecting any link on Thursday.

“Climate change is a global phenomenon, and we’re doing our bit as part of the response to climate change,” Morrison told ABC radio. “To suggest that with just 1.3% of global emissions that Australia doing something differently – more or less – would have changed the fire outcome this season, I don’t think that stands up to any credible scientific evidence at all.”

Morrison’s conservative government has committed to the Paris Agreement to reduce its emissions by 26-28% from 2005 levels by 2030. Critics point out that current projections suggest it will not meet that target and have called on the government to put in place policies to address the shortfall.

Gynaecologists concerned that Gesy two-yearly Pap tests are not enough