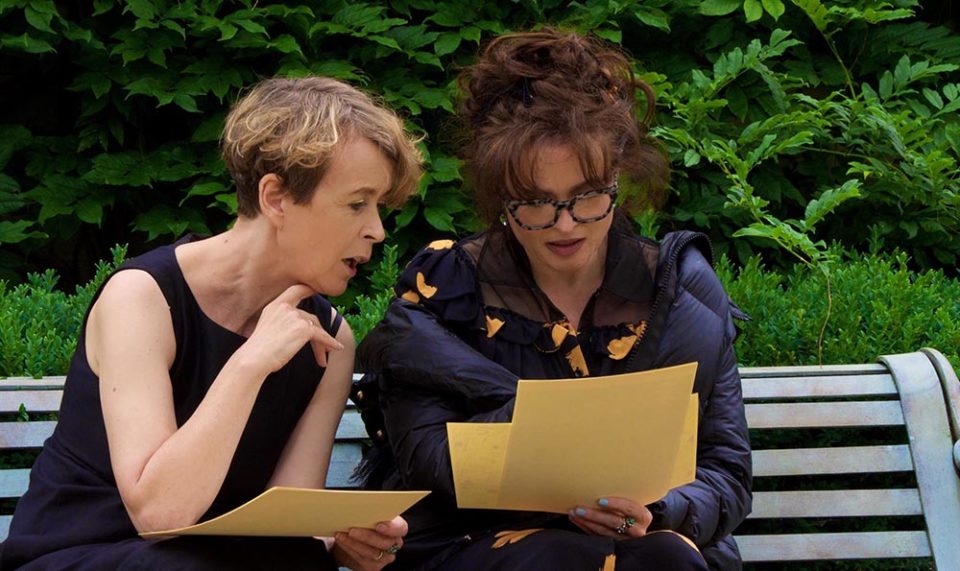 Chances are you’ll have heard about Helena Bonham Carter’s star turn in The Crown.

In the third series of the hugely popular Netflix drama – which sees Olivia Colman replace Claire Foy as The Queen – the eccentric Londoner, 53, plays Princess Margaret.

Covering 1964 to 1976, the new episodes look at the breakdown of Margaret’s marriage, her new relationship with a much younger man, and bubbling tensions between her and her older sister.

“The thing with Margaret is she was somebody who I don’t think found it that easy to be alive, although she had a lot of fun,” Bonham Carter said in a recent interview with The Times.

“She was difficult. She was somebody who had a very low boredom threshold, someone with a very active mind – and I think that’s why she would medicate with drink. A lot of royal life is incredibly boring.”

But The Crown isn’t her only big TV project airing this month.

The other – documentary series My Grandparents’ War – is arguably a much more personal one.

To commemorate the 80th Anniversary of the start of World War Two, Channel 4 sent four celebrated actors off around the world in order to explore their grandparents’ extraordinary wartime stories.

While none of her grandparents fought in any battles, we learn both sets – one in France, one in England – saved countless lives.

Meanwhile, Lady Violet Bonham Carter – her paternal grandmother, who was a mother of four and liberal politician – took her own stand against anti-Semitism, while also volunteering as an air raid warden and campaigning for women’s rights.

“My family is extraordinary,” effuses Bonham Carter, who has two children, Billy and Nell, with director Tim Burton (they split in 2014 after 13 years together).

“And I was born too late and they died too soon. So, for me, it was like I met them properly, and had a conversation with them.”

It’s well known that Bonham Carter has other fascinating relatives; her great-grandfather – HH Asquith – was the prime minister at the start of the First World War.

One person who we get to meet is her mother Elena, a psychotherapist who’s known as Bubbles.

“All the women in our family never really do stop talking, and I’ve got hours of Bubbles, and she is actually in the documentary,” says the star, also known for film roles such as Fight Club, the Harry Potter franchise, and Sweeney Todd.

“But I do feel it should be part of the national curriculum, we should have all our grandchildren – well, not my grandchildren! I always age myself up! – but my children, I want them to talk to my parents and there should be this handing down.”

She continues passionately: “Also, what struck me watching that, is that there is all this silence around trauma, so it needs time for people to make sense of it. We were lucky – it’s the time for people to speak and for us to find out.”

In the second film, we discover the story of Osmond Skinner, the grandfather of Dunkirk star Sir Mark (who was unable to attend the press launch of the series). A banker for HSBC, Skinner bravely joined the Hong Kong Volunteer Defence Force and survived four years as a Japanese Prisoner of War.

Next, we hear how Scott Thomas’ grandfather William survived some of the most devastating battles, from Dunkirk to D-Day, as a Commanding officer in the Royal Navy. She also learns about the horrors he endured on board Russian Arctic convoys.

The final episode sees Mulligan meet people who were on board Britain’s biggest warship with her grandfather, Denzil Booth, and hear what it was like to be attacked by a Japanese Kamikaze.

“What this did so brilliantly for us was bring it home,” suggests the 34-year-old, known for films like Drive and Shame, of her experience when filming.

“It made it real – we felt like we were there. We had this incredible research, amazing people recreating, the privilege of being able to have access to all the incredible stuff… we lived in it, which is why we were all emotional.”

Discussing what she learnt from making the documentary, Scott Thomas, 60, notes: “You realise that you just don’t know how you’re going to behave in situations of fear and stress and life and death situations.

Making the film also gave the Cornwall-born actress – whose father and stepfather both died flying planes as Royal Navy pilots – a “new feeling of respect, or understanding of a certain way of seeing the world”.

“And that sense of duty, which is something that really was driven home by doing this,” The English Patient star elaborates.

“Serving the country is something that was really a big shock to me. I’ve known about it in principle, but this really made me understand what that actually meant.”

As you can imagine, the series is an emotional watch. London-born Mulligan reveals she “cried, like, every day” whilst filming – which her mum joined her for – even though she was so little (just five years old) when Den died.

“There were different layers of experiences; experiencing it as a granddaughter and feeling that pride about, in my mind, heroic service, that I knew nothing about and that he’d not really spoken about,” she notes.

“And then there was experiencing it through my mum, who was sitting on the other side of the camera, and learning everything as I was learning it.”

My Grandparents War starts on Channel 4 on Wednesday, November 27

Woman locks herself in house, threatens to set herself alight

Leaders to meet at 7pm on Monday in Berlin