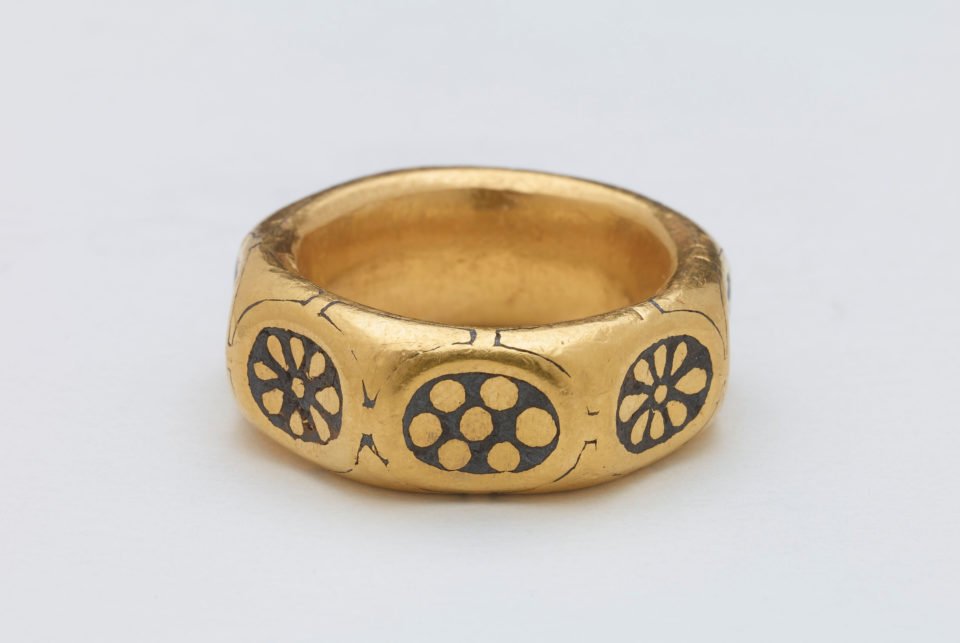 Two metal detectorists have been convicted of stealing a £3 million Viking hoard of coins and priceless jewellery – much of which is still missing.

George Powell, 38, and Layton Davies, 51, failed to declare an “invaluable” collection of buried treasure dating back 1,100 years to the reign of King Alfred the Great.

Prosecutors said the items, many of which were Anglo Saxon but are typical of a Viking burial hoard, were dug up on Herefordshire farmland on June 2, 2015.

Among the priceless hoard was a ninth century gold ring, a dragon’s head bracelet, a silver ingot, a crystal rock pendant dating to the fifth century and up to 300 coins, some dating to the reign of King Alfred.

Only 31 of the coins have been recovered, although mobile phone photographs – later deleted, but recovered by police – showed the larger hoard, still intact, in a freshly dug hole.

Powell and Davies were also convicted alongside two other men, 60-year-old Paul Wells and Simon Wicks, 57, with conspiring to conceal the find.

Davies, who chose to give evidence in his defence, claimed the pair dug the jewellery out of two separate holes but photographs taken on his phone and later deleted clearly showed the trove as one.

He also alleged Powell had then planted some coins, which he already owned, in the hole for “staged” photographs, to give the items greater provenance and value.

One of the images appeared to show many more silver ingots than the one recovered by police but the men claimed these were simply bullet casings.

Both men also claimed talk of a 300-coin hoard had been a rumour, insisting that the only coins they found were declared to the National Museum Wales, in Cardiff, at a meeting on July 8.

However, they were undone by evidence including deleted photos of a much larger hoard on Davies’s phone and the recovery of various coins, including five concealed in a magnifying glass case and volunteered to police by Wells.

Wicks, Powell and Davies were also found guilty of converting their ill-gotten gains into cash, after police traced several coins that had been sold on to private collectors, hidden away or left with expert valuers.

All four men were convicted of ignoring the law stating such finds must be properly declared, in a bid to sell the items in small batches.

Five of the coins are examples of the exceptionally rare Two Emperors penny, valued at up to £50,000 apiece, and so-called as they depict King Alfred and a lesser known monarch, Ceolwulf II, who reigned in the old kingdom of Mercia, sitting together.

Expert analysis of all the jewellery and coinage recovered to date and now held at the British Museum returned a valuation of at least £581,000.

As to the fate of the rest of the coins and items in the hoard, prosecuting barrister Kevin Hegarty QC told jurors: “They have not been found.

“They must be concealed in one or more places or by now having been concealed have been dispersed never to be reassembled as a hoard of such coinage again.”

Powell, of Kirby Lane, Newport; Davies, of Cardiff Road, Pontypridd; Wells, of Newport Road, Cardiff, and Wicks, of Hawks Road, Hailsham, East Sussex, will be sentenced at a later date.

Adjourning the case for a hearing on Friday, Judge Nicholas Cartwright said: “I am not going to admit George Powell bail, he’s going to be sentenced for theft of items worth millions of pounds and is facing a very long sentence of imprisonment and in addition to that there will inevitably be a confiscation process.

“There are hidden assets by way of unrecovered treasure worth a very large sum, probably millions of pounds, so there’s the prospect of a very long default period of imprisonment should the assets remain hidden.”

Speaking afterwards, Detective Constable Nigel Cleeton, who led the West Mercia Police investigation, welcomed the verdicts and appealed to the public for information to “help us find the rest of this hoard and put it back together”.

State rapped over plan to extend use of official fleet